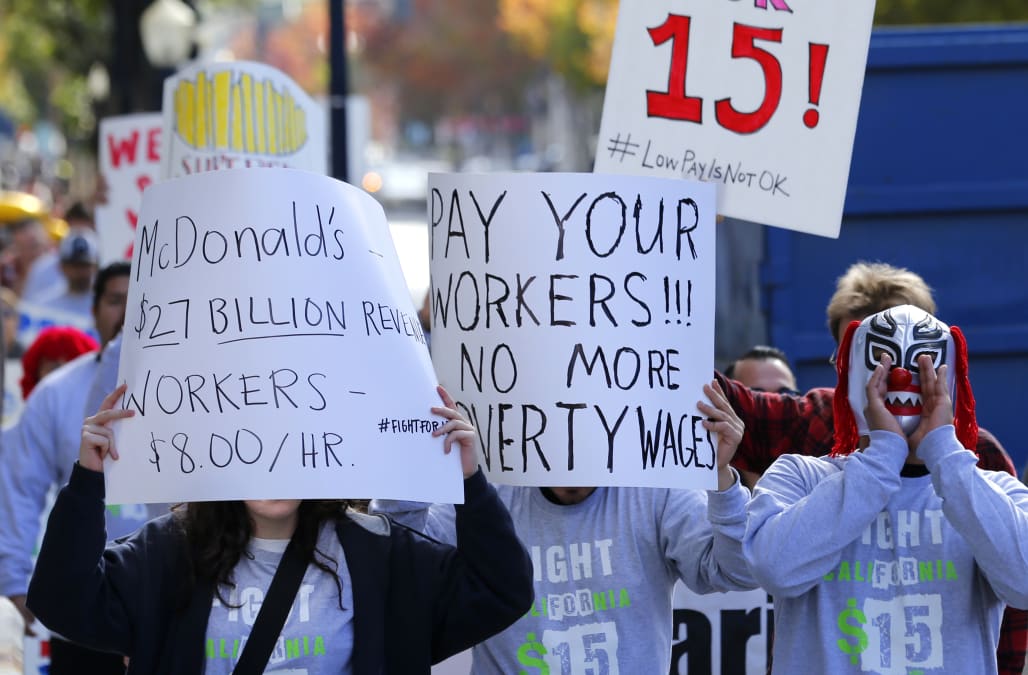 Minimum wage workers in 18 states will get a pay hike next week when higher wage floors go into effect around the country for 2018.

With the federal minimum wage remaining just $7.25 per hour, more and more states have opted to implement their own, higher rates that local employers must observe. Many of the bumps slated for New Year’s Day come courtesy of recent ballot initiatives approved by voters or bills passed by statehouses, in red and blue states alike.

Some of those states have laws requiring that the minimum wage is adjusted each year according to an inflation index, to rise with the cost of living. So several of the raises amount to less than a quarter an hour.

But other states that recently enacted new laws will have more significant increases. Maine’s will move a full dollar, to $10. Hawaii’s will rise 85 cents, to $10.10. And Colorado’s will increase 90 cents, to $10.20.

Here are all of the minimum wage raises scheduled for the new year, as compiled by the Economic Policy Institute, a progressive think tank that tracks minimum wage legislation:

The institute estimates that the raises next week will impact 4.5 million workers.

The federal minimum wage hasn’t budged in more than eight years and prevails in any state that doesn’t mandate a higher one. The last hike, in 2009, was the result of a series of increases signed into law by President George W. Bush. President Barack Obama stumped for a minimum wage hike throughout his second term, but Republicans in Congress blocked Democratic proposals from coming up for a vote.

RELATED: Here's an inside look at the minimum wage protest:

Minimum wage bumps tend to be popular with the general public, with support often crossing partisan lines. A HuffPost YouGov poll last year found that more than half of all Americans thought a minimum wage raise would be good for workers, while only a third thought it would be a bad idea. The backing was greatest ― and most bipartisan ― for a modest hike to $10.10, as opposed to a bolder raise to $15.

Buoyed by that support, labor unions and low-wage workers have succeeded in getting raises passed on the state and local levels as the federal rate has stayed stagnant. Voters have approved minimum wage referendums even in more conservative states like Nebraska and South Dakota. Twenty-nine states and the District of Columbia now require a higher minimum wage than the federal one.

Dozens of cities and counties have also raised their minimum wages beyond the state and federal levels. In some cases, the hikes have gone as high as $15 per hour ― the stated goal of the Fight for $15 campaign, the union-backed movement that began with striking fast-food workers in 2012 but soon spread to other low-wage industries.

All that success by activists has prompted a backlash from Republican state lawmakers seeking to rein in minimum wage hikes. More than two dozen states now have “preemption” laws on their books that block localities from implementing their own raises. Many of these laws were passed in just the last few years to thwart campaigns by workers and unions.

Just this year, Republicans in Missouri passed a preemption law to retroactively kill a minimum wage hike enacted by city leaders in St. Louis. Under the new law, no locality could have a wage floor higher than the one mandated by the state. As HuffPost reported in July, the new law had the effect of reversing St. Louis’ minimum wage, taking it from $10 to the current state level of $7.70.

More from HuffPost US:
Dustin Hoffman's Accusers Thank John Oliver For Confronting Him On Sexual Misconduct Allegations
How One Dying Man Changed The Debate About The Tax Bill
8 Photos Show Americans Coming Together Despite The Awfulness Of 2017