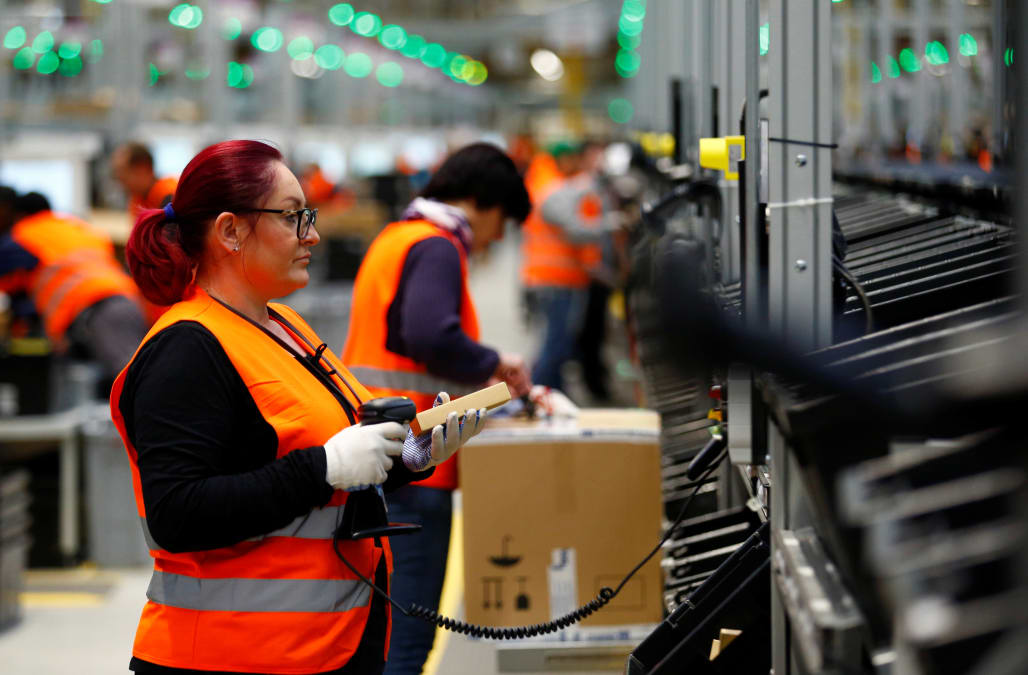 (Reuters) - Wal-Mart Stores Inc is within striking distance of matching Amazon.com Inc's online prices for the first time, a key milestone in its effort to regain the "low price leader" title.

Wal-Mart has aggressively invested in making its prices more competitive against brick-and-mortar rivals since the start of the year.

Now, the shrinking gap is also becoming noticeable across a broad range of product categories online, according to a price study conducted for Reuters, as well as interviews with pricing experts, retail consultants, vendors and company sources.

Prices at Walmart.com are now only 0.3 percent more expensive than Amazon on average, according to the study by retail data analytics firm Market Track, which analyzed prices of 213 products in 11 categories over a period of 700 days ending November 7, 2017.

By comparison, Wal-Mart's online prices were 3 percent higher than Amazon's on average in the first 350 days ending November 7, 2016, according to the study.

These findings indicate that Wal-Mart has managed to slash prices online across several product categories consistently, rather than with just temporary discounts.

Consistent lower pricing is key to boosting sales throughout the year. On Cyber Monday, the busiest day of the year for internet shopping, online deals and temporary promotions will overshadow pricing for both retail giants.

"We are committed to having online prices that meet or beat prices at other top sites," said Wal-Mart spokesman Dan Toporek. He said for some items the retailer now displays two prices online to show shoppers when they can get a lower price by picking up their order in a store, but declined to comment further on the company's pricing strategy.

25 PHOTOS
The 25 hottest toys of 2017, according to Walmart
See Gallery

Disney Junior Doc McStuffins Baby All in One Nursery

Details for this year's Hatchimals toy have not been released yet, but Walmart still expects it to be a big seller.

Amazon spokeswoman Kate Scarpa said nothing has changed in the retailer's approach to delivering low prices to customers.

"Amazon's prices are as low or lower than any other retailer and we work hard for customers to ensure that's true every day," she said, declining to comment further on the retailer's pricing strategy.

The consistent price cuts are one of several steps Wal-Mart is taking to boost its e-commerce business, including expanding its online offerings, acquiring smaller online retailers such as Jet.com, and offering free-two day shipping.

Burt Flickinger, managing director of retail consultancy Strategic Resources Group, conducted his own internal pricing study for clients in Texas last month. His data shows Wal-Mart is closing the gap with Amazon this year compared with a year ago when prices for a range of goods were between 5-12 percent higher at Wal-Mart.

"What we have started seeing recently is Wal-Mart lowering the gap with Amazon to a point where it is a photo finish," said Flickinger. "Consumers can't tell the difference anymore."

So far the strategy is paying off. Online sales at the world's largest retailer grew 50 percent year-over-year in the most recent quarter, helping it post its strongest quarterly U.S. revenue growth in nearly a decade. It now accounts for 3.6 percent of total U.S. online sales in the 12 months to October 2017, up from a 2.8 percent share a year ago, according to digital research firm eMarketer.

Even with this progress, Wal-Mart has a long way to go. Amazon's share of the U.S. e-commerce market stands at 43.5 percent. About half of U.S. households are estimated to have Amazon Prime subscriptions, Cowen and Co has predicted, making them less likely to comparison-shop.

But Wal-Mart is also vying for the online business of other brick-and-mortar rivals, from Target Corp to WayFair Inc , which have been targeting shoppers who compare prices on search engine such as Google. Wal-Mart could gain more market share at their expense through its price cuts, analysts say. "Wal-Mart's objective here may not be to unseat Amazon as much as it is to convince (Wal-Mart's) loyal store shoppers it is also a low-price leader online," said Keith Anderson, senior vice-president of strategy and insights at e-commerce analytics firm Profitero.

Analysts and consultants estimate the retailer will have to fork out around $6 billion over several years to maintain price parity with Amazon online and take on the rest of the retail pack.

These investments have already started to erode Wal-Mart's profitability. Operating margins fell for four straight quarters to 2.8 percent in the three months to Oct. 31.

However, Wal-Mart has a $6.9 billion cash pile to tap in order to invest in online prices. Investors have so far shown no concern that the cost of online price cuts could weigh on Wal-Mart's announced $20 billion share buyback program; the company's shares are up 1.5 percent since it reported stronger online sales on Nov 16.

What is more, the retailer said last year and again this October month that it would slow down the rollout of new stores and divert that capital expenditure towards becoming more competitive online.

"Right now the better use of cash is to compete with Amazon and invest that in the business, because if anyone has a fighting chance to stand up to Amazon, it is Wal-Mart," said Charles Sizemore, the chief investment officer at Sizemore Capital Management, which owns Wal-Mart shares.

More from Aol.com:
Is a Costco membership worth it for Black Friday alone?
Forget Black Friday -- you're better off shopping on Cyber Monday
Best Buy looks like it's crushing Black Friday as hundreds of people flood stores — but it may not be everything it seems