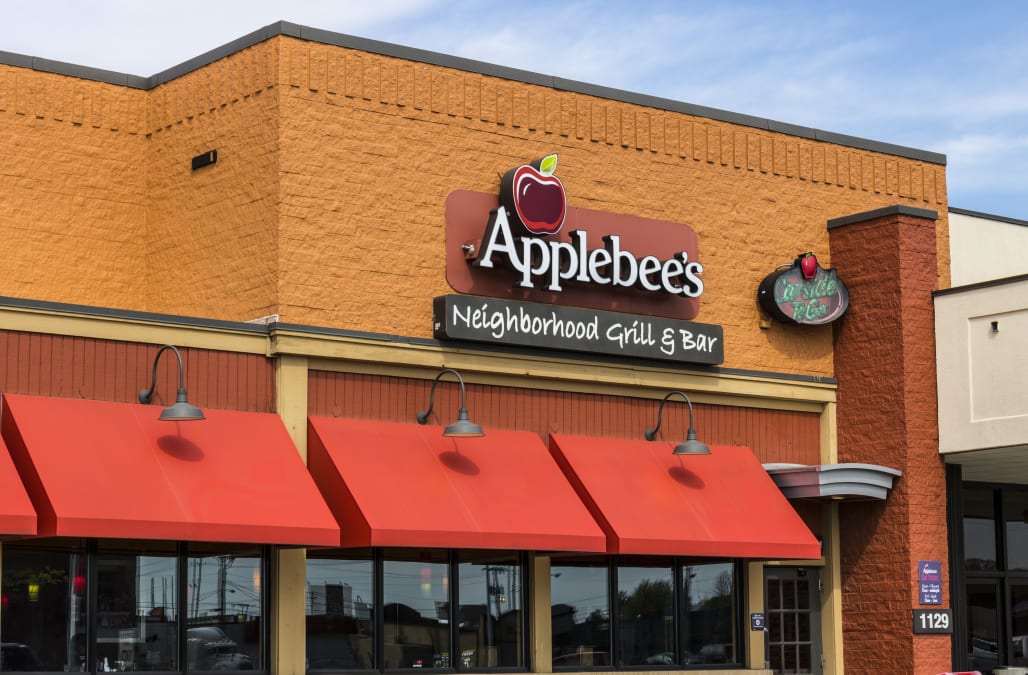 Applebee's locations are disappearing across the US.

On Thursday, executives announced that the chain plans to close between 105 and 135 locations this year.

"We are long overdue in rationalizing the size of our system and closing poorly performing restaurants," Dine Equity CEO Richard Dahl said in a call with investors.

Dine Equity, which also owns IHOP, reported that its net income in the second quarter was $20.9 million, down from $26.4 million in the same quarter last year. Applebee's same-store sales decreased 7% in the quarter.

Executives blamed difficulties in part on Applebee's attempt to win over millennial diners.

13 chains taking over the US:

"Over the past few years, the brand's set out to reposition or reinvent Applebee's as a modern bar and grill in overt pursuit of a more youthful and affluent demographic with a more independent or even sophisticated dining mindset, including a clear pendulum swing towards millennials," John Cywinski, Applebee's brand president, said Thursday.

"In my perspective, this pursuit led to decisions that created confusion among core guests, as Applebee's intentionally drifted from its what I'll call its Middle America roots and its abundant value position," he continued. "While we certainly hope to extend our reach, we can't alienate Boomers or Gen-Xers in the process."

In 2016, Applebee's launched what it called a "comprehensive business transformation" in an attempt to modernize the chain. Changes such as installing fire grills in all 2,000-plus locations across the US — a $40 million investment by the chain's franchisees — and redesigning locations were supposed to distinguish Applebee's from other casual dining chains.

Moving foward, Cywinski said that Applebee's will focus on "routine traditionalists" who actually enjoy casual dining chains and have favorite menu items, as well as "value seekers" who are looking for deals at sit-down restaurants.

Restaurants slated for closure are either in areas with declining traffic, such as restaurants near once bustling but now dead malls, or locations with low sales that offer customers a "substandard experience," according to executives.

Applebee's isn't the only casual dining chain struggling to win over customers. Brands such as TGI Fridays, Ruby Tuesday, and Olive Garden have faced sales slumps and dozens of restaurant closures in recent months.

RELATED: How to cut your next restaurant bill in half

How to cut your next restaurant bill in half

You can buy gift cards for less than their face value on websites that enable people to sell unwanted cards. Examples of these online marketplaces include Cardpool.com and Raise.com.To learn more about them, check out “How Unwanted Gift Cards Saved Me $300 Last Year.”

Here is an extra tip: Make any purchases from Restaurant.com or sites like Groupon and LivingSocial via a cash-back portal such as Ebates. These sites effectively pay you to shop online by giving you a percentage of your purchase cost back as a rebate.

3. Use a rewards credit card

If you eat out often, look into rewards credit cards that give a greater percentage of cash back for such purchases.

For help finding the perfect credit card, visit the Money Talks News Solutions Center. You can sort credit card offers by “Cash Back” and “Reward,” for example.

AARP membership benefits include discounts of 10 to 15 percent at certain restaurant chains.

Note that, as we report in “6 Fabulous Ways to Save After You Turn 50,” you can join AARP upon turning 50.

Many eateries — from sit-down restaurants to fast-food joints and ice-cream chains — have an email list they use to notify subscribers of deals. Look for a sign-up option on the websites of your favorite restaurants and other restaurants you would like to try.

One of my current favorite examples is P.F. Chang’s China Bistro. The restaurant sends me a coupon for an entire free entree with the purchase of one entree about once a month. That’s a savings of up to 50 percent — and all I have to do is show the server my emailed coupon on my phone.

6. Take advantage of your birthday

Some restaurants with email lists ask for your birthday upon sign-up and send you a freebie each year to celebrate.

For examples, check out “Happy Birthday — Get Free Food at These 27 Restaurants.”

Yes, hunger is what brings us to restaurants. But just as you’re liable to spend more on groceries when you go to the supermarket on an empty stomach, you’re likely to order too much if you walk into a restaurant famished.

This is especially smart if you prefer to eat a simple dessert such as ice cream. The carton you bought at the grocery store can be just as tasty for a fraction of the price.

Even if you’re in the mood for a slice of cake, single servings generally can be found in a grocery store’s bakery department or frozen-dessert aisle for less than the cost of a slice at a restaurant.

You might think bringing your own alcohol to a restaurant would save you money. But even if a restaurant allows you to bring your own booze, you still might end up paying more than you expect.

Jay Zagorsky, a research scientist at Ohio State University, explains on his economics blog that one reason some restaurants adopt BYOB policies is that many customers who bring alcohol then buy coffee to sober up before leaving the restaurant:

“Letting people bring their own bottle boosts coffee sales. Coffee has a very high markup and this increases profits. Plus, coffee drinkers sometimes order dessert, which has a higher markup than main courses.”

12. Use social media to get discounts

Other places offer discounts or freebies to customers who “check in” via location-based social media networks such as Foursquare, which calls them specials.

What’s your favorite way to save money when eating out? Let us know in the “Comments” section below or on our Facebook page.