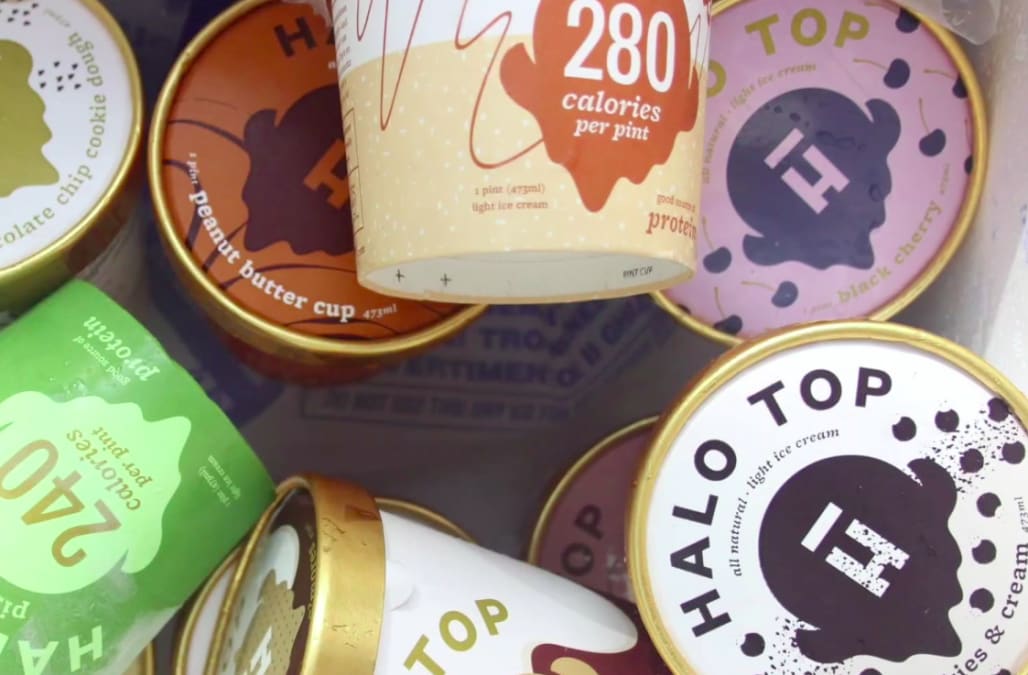 Halo Top is now the best-selling pint of ice cream in US grocery stores. But, a wave of backlash is building against the ice cream brand that markets itself as "healthy."

Fans have embraced Halo Top for its promise that customers can scarf down a pint of ice cream and still be healthy. Vanilla, for example, only has 240 calories — for the entire pint.

"We know it sounds too good to be true, so don't just take our word for it — dig in and see for yourself just how good healthy ice cream can be!" Halo Top's website reads.

However, some nutritionists are pushing back on the ice cream company's claims that its ice cream is truly "healthy."

"Marketing ice cream as healthy is an oxymoron if I've ever heard one," Marion Nestle, a professor of nutrition, food studies, and public health at New York University, told Fortune. "This fits perfectly in the category of 'just because it's a slightly better choice does not mean that it is a good choice.'"

Nestle was just one of a number of nutrition experts who spoke to Fortune in an article published Thursday to tear down Halo Top's self-proclaimed health benefits.

One professor of nutrition, Barry Popkin from the University of North Carolina, questioned the company's use of sugar alcohol additive erythritol that Halo Top uses to cut back on sugar. According to Popkin, too much erythritol can cause diarrhea and bloating, though Halo Top told Fortune that someone would have to eat three pints to be in danger of these symptoms.

Online, another wave of backlash has been brewing against Halo Top. According to some critics, the ice cream simply... doesn't taste that good.

Halo Top ice cream is terrible. Anyone who suggests otherwise is an idiot.

While Halo Top's Facebook reviews are overwhelmingly positive, there are a few critics giving the ice cream just one star.

"I've had so many ice cream brands and this was legit the worst," one person wrote. "My dog took 2 licks and walked away. Seriously. Never going to try again."

Halo Top was something of an instant success last summer, with sales rocketing by 2500% to sell 28.8 million pints in 2016. Now, the company is going to need to figure out how to battle backlash and cement its position as the No. 1 brand in ice cream.

RELATED: Companies that use colors in their logos to influence you

Companies that use colors in their logos to influence you

McDonald's uses red because it's seen as an energizing and stands out easily. It's even thought the color stimulates hunger, which may be why a number of other fast food brands use the color.

Red is also often used to signal a sale, so many brands will use it in combination with a softer color like white or yellow to convey the properties of red without risking the perception the brand may be going out of business.

With the use of green, which is often used to signal health and restoration, Subway looks to convey the values of freshness which it has put at the core of its brand.

Yellow is also another color that can easily be spotted from far away and draw consumers to its restaurants.

Blue and pink are often combined to promote sugary products since pink signals sweetness and playfulness.

Carol Austin, VP of marketing for the brand told CNBC the logo is "meant to convey the fun and energy of the Baskin-Robbins brand."

The logo also has a hidden message: The pink 31 in the logo stands for each day in the month that consumers can discover a new flavor.

Blue is used to signal trustworthiness, often demanded by consumers from airlines.

It's also associated with reliability and loyalty, which is why law enforcement uniforms are blue.

British Airways keeps the values of trustworthiness and reliability brands can get from using blue, but adds in red, signaling warmth and comfort.

The current logo was originally designed in 1997 and hasn't changed since.

Like many other airlines, Lufthansa uses blue but it's one of the few to add yellow, which stands for happiness and optimism.

The visual identity was introduced by the German graphic designer Olt Aicher and was considered one of the most successful rebrands of the 20th century. But Aicher himself never considered the design as mature, according to Disegno.

The color blue is often used by telecoms companies because it conveys clarity and security.

The current Nokia logo has been in place ever since it moved to telecommunications equipment — before that it was a paper mill company.

Qualcomm is a pioneer of many technologies found in smartphones today.

The chips it produces are used by the majority of smartphone brands, including Apple, Samsung, and LG among many others. The black in the logo signals strength and security, both essential to any smartphone manufacturer.

Chanel was the pioneer of the famous "little black dress" so it's only natural for the color black to be a core part of the brand's identity.

Black is considered to be a very fashionable color and stands for the sophistication in the retail world.

The use of black to signal elegance and red for passion falls in line with Vans' values of enabling people to do what they love.

The brand has recently started to look to appeal to audiences outside of skateboarding and its latest campaign is all about people following their creative passions.

Orange is thought to exude extroversion and confidence, which Hermes has every right to as the world's second most valuable luxury brand.

The brand reportedly chose the color orange out of necessity: It was the color of the only paperboard available to the company during the Second World War.

The different shades of silver often used in the automobile industry stand for quality and workmanship.

The Toyota logo took three years to design and is meant to be recognized head-on and in a rear view mirror. The two inner circles represent the relationship between the customer and the brand living together in the world, which is depicted by the bigger circle around them.

The red Audi script in the logo is meant to stand for masculinity of the brand and a love for driving.

While much can be read into the four rings logo, the reasoning behind it is practical: Audi was one of four car companies that merged in 1932. The logo of the new company became all four logos in circles linked together. The individual brands' logos were eventually dropped, leaving only the four rings.

With the blue in its logo, Volkswagen wants to convey the values that German cars have become known for: Reliability and consistency.

It also fits with the name of the brand, which translates to "car for the people."

The British improvement store chain decided to go with blue in its logo to help customers relax before taking on a big DIY project.

Orange is considered a youthful color, which evokes a feeling of excitement and fun.

The brightness of the color makes it easy to spot a Home Depot from far away.

Screwfix is the biggest British store in the country catering to professional handymen.

It uses red, which is thought to raise the heart rate and physically motivate people, in Screwfix's case, to get to work on construction projects.

Medical companies will often turn to blue because it stands for cleanliness and health.

The oval shape of Pfizer's logo, which was created in 1987, is meant to be similar to that of a medical pill.

GSK is a recently created company, formed out of a merger of two British pharmaceutical companies.

This edition of the logo was created in 2014, but the color orange has always been a part of the company's branding. The color is often associated with feelings of happiness and confidence.

The American pharma company, one of the largest in the world, has gone through multiple editions of its branding. The green logo is associated with feelings of health and healing.

Blue is considered a color that promotes feelings of trustworthiness and security.

The eagle in the USPS logo was always a part of the brand, but it's only since 1993 that the current "sonic eagle" has been on mail delivery trucks.

The Dutch parcel delivery company is one of the biggest in the world, with a presence in 61 countries and over $7 billion in sales in 2015.

The firm was acquired by FedEx in 2016. It used the color orange to signal its affordability to customers.

(Photo by Ben A. Pruchnie/Getty Images)

NOW WATCH: The company that makes Oreos just revealed a huge shift in how Americans eat

SEE ALSO: Halo Top is now the most popular pint of ice-cream in America – here's how it did it