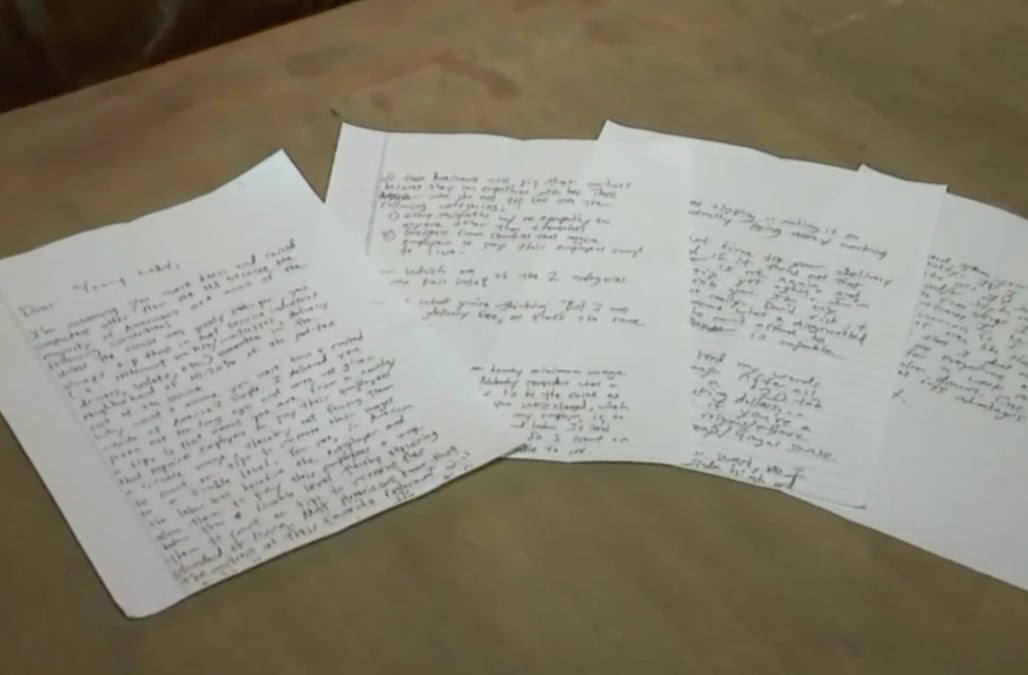 A delivery driver with Postmates threatened to "rob" a woman after she failed to leave him a $4 tip on a $20 pizza order.

Lauren Ledford found a four-page letter on her doorstep in Redondo Beach, California, after she didn't leave a tip for a Postmates driver who had delivered a pizza to her home the week before.

In the letter, the driver threatened to come back and rob Ledford if she does not tip in future.

"I'm only joking, but not really. Don't risk it though. Who knows what a disgruntled delivery driver who can't afford to eat that day is capable of," the letter read.

He then went on to make racist and derogatory comments about women and claimed that he was "high."

Ledford, who describes herself as a model on her Facebook page, posted the letter to social media after complaining that Postmates, an app that connects independent delivery drivers and couriers to customers to order almost anything — from restaurant meals to groceries — had not addressed the issue or called her back.

Ledford wrote on Facebook that she thought a tip was included in the delivery charges that had been added to her order by Postmates. She also confirmed that the order was indeed booked via Postmates, since this was the only pizza delivery she had received in the past two months.

In the letter, the driver identified himself as a man and confirms that he had delivered pizza to her house the week before.

Tipping should be based on your comfort level.

If you are getting your hair done for the first time by someone new, tipping 15% is absolutely ok. If you've developed a relationship with your hairstylists, we suggest you tip at least 20%, even 25%. While it may seem like too much, your hairstylist spends 1-2 hrs on your hair, they deserve a proper thank you!

While you may be focused on tipping your hairstylist, don't forget to give a few dollars to the other stylists who helped. If you had someone wash your hair that's different than your stylist, you should always give them $4-6 as a thank you.

They helped make you look beautiful!

Tipping for freebies?
Some salons will offer a free bang trim or complimentary trim that accompanies their original service. If this is the case, make sure you tip a little. They are giving you a free service (and let's face it, nothing is free) so by thanking them for going above and beyond is key.
Tipping on your manicure
Whether you are at the most high-end salon or the local nail salon down the street, you should always tip 15-20%. Consider the treatment you are getting done as well. If you are opting for gel manicures, we suggest you tip more (around 25%). The longer and more detailed manicure deserves a bigger tip.
Tipping on your pedicure
Tipping on your pedicure is similar to tipping on your manicure but we suggest tipping a little more on this service. If you are getting a pedicure tip roughly 22%. If you are getting a discounted manicure/pedicure combo, we suggest you tip 25%. Just because it's discounted doesn't mean you should tip less!
Tipping for a spa service
Prices for a spa services vary a lot between smaller services like a wax to more in-depth services like a massage or a facial. We suggest you tip at least 25% for most services. Of course, if you aren't happy with the service, tip less, but even small services take time.
Salon ettiquete
Get off your phones! If you're in the midst of a service, we suggest you keep your phone away. Not only should you enjoy your service but for the stylist there is nothing worse. Many have expressed concern that someone on their phone is a recipe for a haircut disaster.
One more thing!
BRING CASH! Most salons will not accept tips via credit cards or debit cards which means you'll need to bring cash for tip. Save yourself a unneccesary trip to the grocery store for cash and bring it with you.
Up Next

Postmates confirmed to Business Insider that it had suspended the driver and contacted Ledford personally to apologize. The company said that all of its contracted drivers go through background checks.

"Every Postmate is screened before they're permitted to deliver on our platform, starting with professional third-party background and DMV checks," a spokesperson for the app told Business Insider.

"The criminal background check includes national and county-level databases and records stretching back a minimum of 7 years for review of convictions in California, or as deemed appropriate in other jurisdictions. Among other things, Postmates denies access to applicants for violent crimes, felonies, sexual offenses, or drug-related convictions that appear on a background check," the spokesperson said.

Ledford contacted local police to get a restraining order, but Postmates has refused to release the driver's full identity.

"It's really scary knowing that they have suddenly cut this man's income off and will not help to ensure my protection from this psycho," Ledford wrote on her Facebook page.

NOW WATCH: We tried on Pizza Hut's new Bluetooth-enabled sneakers that let you order delivery with just a push of a button

SEE ALSO: The most successful fast-food chains in America