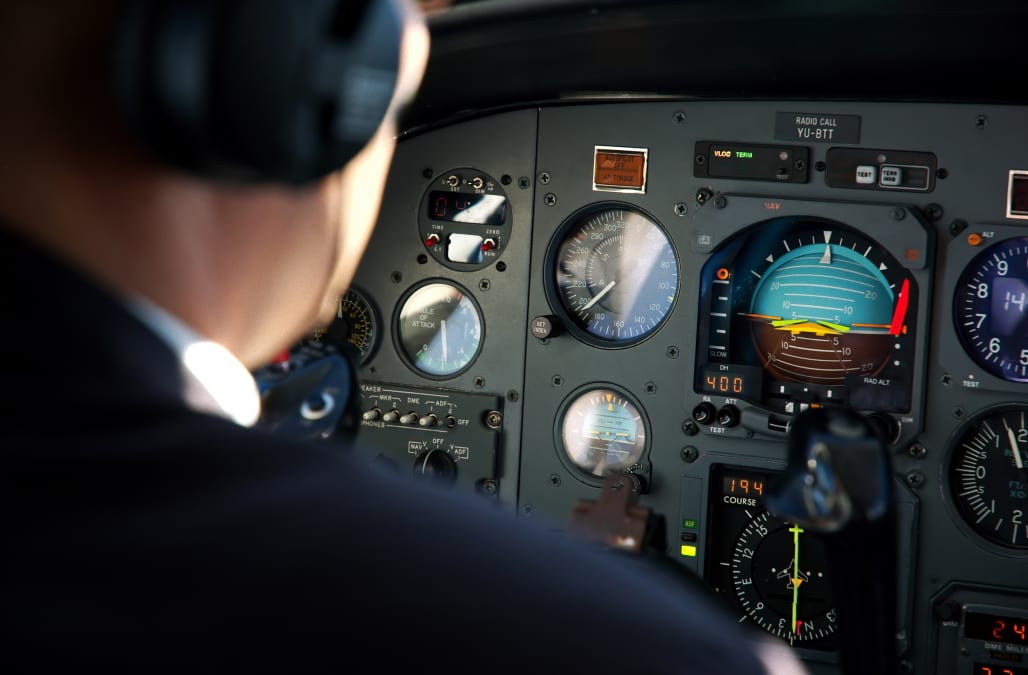 If you love flying and want to get paid to spend your days (and nights) zooming through the skies, your job prospects are about to get a lot better.

A perfect storm of circumstances is developing in the aviation industry that experts say could lead to 117,000 unfilled pilot jobs in the next 20 years.

A huge batch of longtime pilots are set to retire in the next few years, and there aren't enough new pilots to replace them all, according to CNN Money.

Meanwhile, cargo and passenger airlines are buying more planes to keep up with increased shipping and travel needs, but there aren't enough qualified pilots to fly them.

Though the need for pilots is on the rise, the number of people training for a pilot license is dropping.

Used in a sample sentence: "Flight attendants, doors to arrival and crosscheck."

Definition: The announcement, usually made by the lead flight attendant as the plane is approaching the gate, is to verify that the emergency escape slides attached to each door have been disarmed — otherwise the slide will deploy automatically as soon as the door is opened.

Used in a sample sentence: "Flight attendants, doors to arrival, crosscheck and all-call."

Definition: According to Smith, all-call is usually part of the door arming/disarming procedure. "This is a request that each flight attendant report via intercom from his or her station — a sort of flight attendant conference call," he wrote.

Definition: "A racetrack-shaped course flown during weather or traffic delays," Smith wrote. "Published holding patterns are depicted on aeronautical charts, but one can be improvised almost anywhere."

Used in a sample sentence: "We're just finishing up some last minute paperwork and should be underway shortly..."

Definition: For many of us, this announcement is a precursor to a delay. According to Smith, this "paperwork" is usually a revision of the flight plan, something to do with the plane's weight-and-balance record, or simply waiting for the maintenance staff to get the flight's logbook in order.

Used in a sample sentence: "Sorry folks, but there's a ground stop on all flights headed south from here."

Definition: "The point when departures to one or more destinations are curtailed by air traffic control; usually due to a traffic backlog," Smith wrote.

Definition: A colloquial term for a jolt of turbulence.

Used in a sample sentence: "Due to an equipment change, departure for Heathrow is delayed three hours."

Definition: The airplane. "Is there not something strange about the refusal to call the focal object of the entire industry by its real name?" Smith wrote.

Used in a sample sentence: "Ladies and gentlemen, we are now on our final approach into Miami."

Definition: "For pilots, an airplane is on final approach when it has reached the last, straight-in segment of the landing pattern — that is, aligned with the extended centerline of the runway, requiring no additional turns or maneuvering," Smith wrote. "Flight attendants speak of final approach on their own more general terms, in reference to the latter portion of the descent."

Definition: According to Smith, a pilot or flight attendant who is deadheading onboard a flight is one that is traveling to a destination to be repositioned as part of an on-duty assignment. "This is not the same as commuting to work or engaging in personal travel," he clarified.

Definition: Whether or not a flight is "direct" has nothing to do with how many stops it makes on the way to the destination. Instead, a direct flight is defined as a routing where the flight number does not change.

"This is a carryover from the days when flights between major cities routinely made intermediate stops, sometimes several of them," Smith wrote.

A flight that doesn't make any stops is a non-stop flight.

Used in a sample sentence: "We're sorry, your suitcase was crushed by a 747 out on the ramp."

Definition: The ramp is the area closest to the terminal where planes and vehicles are active such as the aircraft parking zones.

Why Are So Few People Becoming Pilots?

While it's tough to say for sure why interest in becoming a pilot is waning, Popular Mechanics suggests the reason is twofold.

Some industry insiders blame the rigorous training and expense of flight school, while pilots themselves say fewer pilots are joining their ranks because the pay is so low.

The Bureau of Labor Statistics places the median pay for airline and commercial pilots at $105,720 per year. Other surveys report significantly lower pay — about $20,000 to $40,000 per year — for regional airline starting salaries.

Pilot Mark Vanhoenacker acknowledges new pilots are likely to face large school loans and low wages, but says that the career is still worthwhile and that he has no regrets.

"Today, after 15 years of flying, I'm one of the few people I know who would happily keep working if I won the lottery," says Vanhoenacker.

What It Takes To Become a Pilot

If you have a bachelor's degree, consider joining the Air Force's Career Pilot Program.

Once your USAF contract is up, you may want to stick around a while longer to take advantage of a bonus program that pays out up to $455,000 over 13 years.

To learn commercial aviation without joining the military:

Once you obtain your private pilot license, your flight school will walk you through the certifications and testing you'll need to work for a passenger or cargo airline.

Passenger airlines have their own set of FAA, flight time and company requirements to be eligible to apply for a pilot job, so you'll need to look around to determine what's a good fit for your qualifications.

Lisa McGreevy is a staff writer at The Penny Hoarder. She's terrified of flying so she's got mad respect for all the pilots who calmly get people like her where she needs to go.