Why one Uber driver loves picking up puking passengers 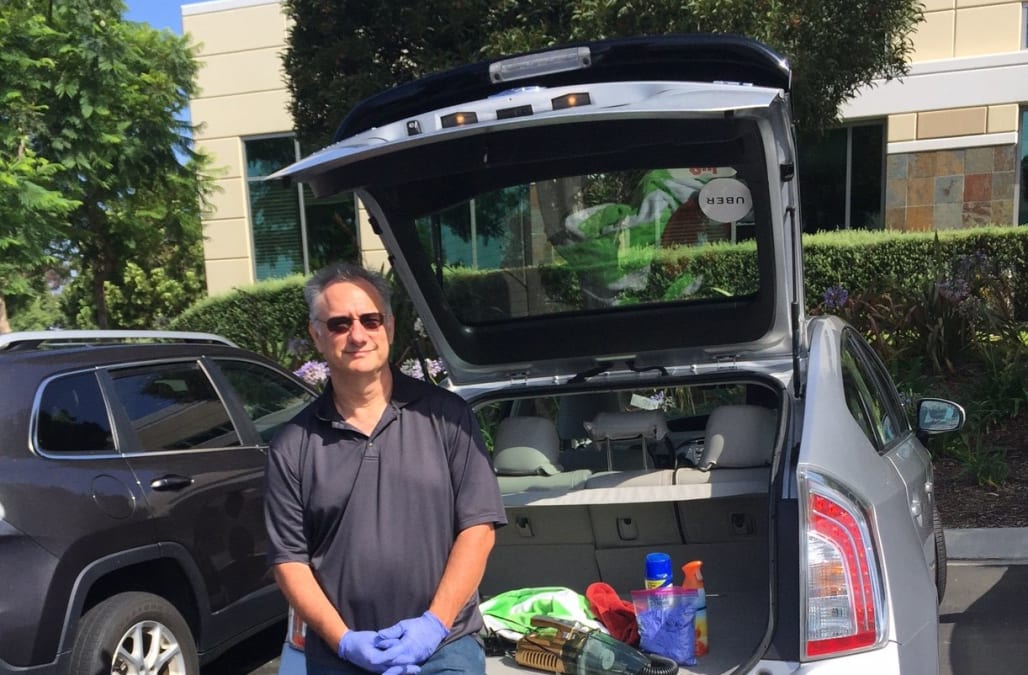 Uber driver Curtis Preston learned his lesson about inebriated passengers the hard way. The first time someone got sick in his car he wasn’t prepared, and the mess took him off the road and cost him $140 to get his car cleaned. Uber reimbursed him $150, but he lost a night of work.

After that first experience, he armored his car against anything a passenger with one too many drinks in them could throw at it.

And he had an important realization: The compensation fee Uber gives drivers whose vehicles get sullied by the boozy or the bilious is designed to cover the cost of getting the car cleaned professionally; if he just did the work himself  he’d be able to keep those cleaning fees and make a little extra money.

Preston now patrols the streets of San Diego in his grey Toyota Prius, equipped with medical gloves, cleaning solution, a portable wet vacuum cleaner, and most importantly, Febreze. Rather than steering clear of the inebriated, he cheerfully welcomes them aboard with the zeal of a Ferris wheel operator.

It's not that he seeks out drunk passengers, he insists. Rather, it's the surge pricing typically in effect during bar closing time that brings him out at that time. But he acknowledges that the customers at that hour tend to be the ones with weak stomachs.

“If you’re drunk enough to need a barf bag, you’re too drunk to use it,” he tells Business Insider, recounting one recent horror story involving a woozy passenger and an ill-fated Taco Bell meal.

Uber used to charge passengers a flat $250 vomit fee, but recently modified its service charge process. Now, the penalties for purging range between $25 and $150. If a passenger makes a noticeable mess, the driver must take multiple photos and email them to Uber, where the company's experts carefully evaluate the damage. Uber then compensates the driver for whatever they estimate a professional clean up would cost. However, Uber doesn't take into account the time that drivers have to spend off the road dealing with the mess — a costly pit stop during peak surge pricing hours. Preston estimates that getting taken off the road for even a half hour during surge hours can easily cost him $50 in lost fares.

With his new self-cleaning system, and the proficiency he's developed, Preston says his downtime is minimal. If someone does let their stomach loose in his car today he still has to take time off the road, but if he can quickly find a gas station to park at, he can be back driving within 10 minutes.

He sends in pictures of any mess that requires him to take his supplies out of the trunk. In a blog post, he details the fees he’s been given in return: $50 for melted chocolate on his seats, $80 for spilled dip, and $30 for the girl who ate two Taco Bell meals in under two miles.

His $40 investment in cleaning supplies was well worth it. Curtis the driver says he made $1500 in cleaning fees last year by having Curtis the cleaner do the work instead of paying for a professional service.

“Whether you’re going for the fees or not, it’s not a way to make extra money," he cautions any drivers interested in catering to a similar demographic. But for drivers who aren't afraid to roll up their sleeves, it's an ideal system.

NOW WATCH: Uber wants to carry you around in a flying car — here’s what it could look like

SEE ALSO: Uber employees are conflicted over Travis Kalanick's resignation — over 1,000 have petitioned for his return