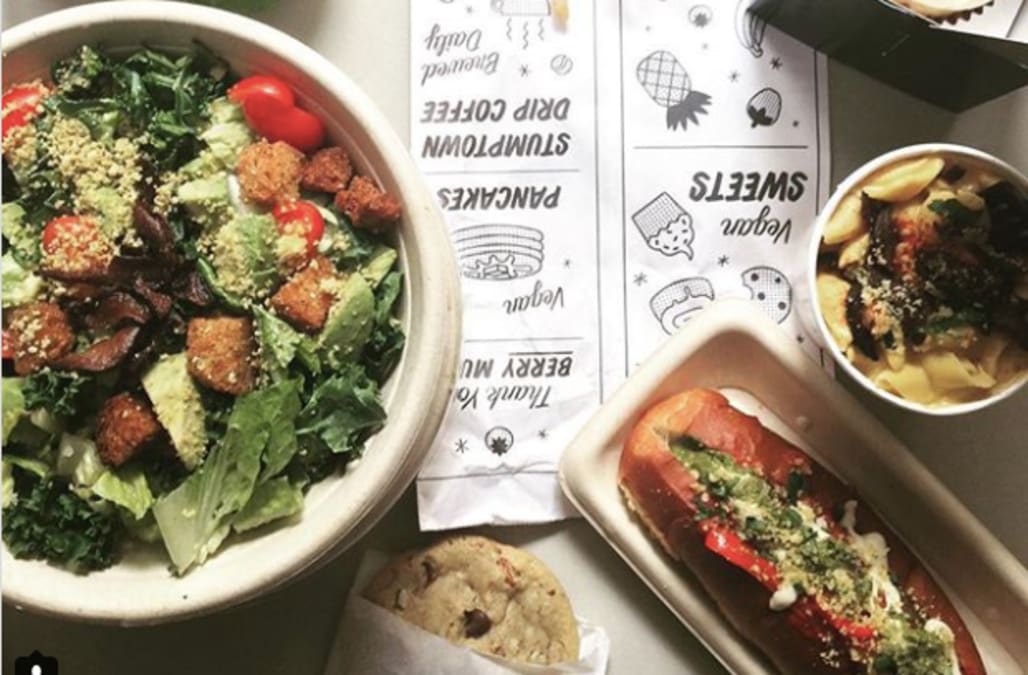 A vegan fast-food chain is winning over omnivores across the US.

In just two years, By Chloe has gone from a single New York City vegan cafe to a mini-chain with seven locations in New York City, Boston, and Los Angeles. The chain plans to open four more locations by the end of 2017.

That's significant for a chain that maintains a 100% vegan menu. That means no meat, milk, eggs, cheese — many of the things that give restaurants, especially fast-food chains, some of their biggest hits.

Despite the meat-free approach, the appeal of By Chloe is that menu items are intended to appeal to vegans and meat-eaters alike, with veggie burgers, french fries, and pasta.

All menu items are under $12, making it an inexpensive and relatively speedy options for people seeking meat-free options.

did we ever tell you about the time we went to @eatbychloe and had some of the best vegan food in the entire world? nope? well here's a picture of a thai salad, sweet potato fries and some beet ketchup to prove just how DELICIOUS this was. can't wait to go back and try more things on the menu! happy tuesday loves 💕

A black bean-quinoa-sweet potato burger, topped with guacamole, takes the place of the Big Mac. Instead of Heinz 57, you can dip fries in beet ketchup and chipotle mayo.

Ain't nobody dope as this @eatbychloe quinoa taco salad.

By Chloe doesn't merely stick with imitating fast-food classics. Some of the best items on the menu are the salads, such as quinoa taco and spicy Thai, which are piled high and incredibly filling.

All I do here is shop and eat✖️

Then, there's the sweets. In September 2016, By Chloe opened its first sweet shop in New York City, selling vegan cakes, pies, and cookies.

It's all incredibly Instagram-able.

By Chloe's rise has not been without its controversies.

In March, cofounders Chloe Coscarelli and Samantha Wasser split, with Coscarelli ousted for "gross negligence." Coscarelli — who once claimed that Wasser and ESquared Hospitality tried to force her to add meat to the menu — brought a certain degree of celebrity to the project, having won Food Network's "Cupcake Wars" at age 22, becoming the first contestant to win with vegan culinary creations.

"It has been very exciting to be able to focus on the uncompromised growth and expansion of the by CHLOE brand," Wasser told Business Insider on the company's growth post-lawsuit.

According to Wasser, the company is now looking forward.

By Chloe partnered with Whole Foods to open a location inside a 365 store in Los Angeles, providing a different avenue of growth for the chain as it expands. And, this fall, new locations are opening in New York City and Providence, Rhode Island.

"Seeing the brand grow and knowing the momentum has only gotten stronger is something I feel very proud to be a part of," Wasser said. "We could not have grown the brand By Chloe, which is now coast to coast, without the people that work with us daily, and guests that come back to see us again and again."

More from Business Insider:
Amazon just dealt a massive blow to Blue Apron
New York City resident reveals why he chooses Olive Garden over some of the best restaurants in the world
Chipotle shut down a restaurant after customers said they became violently ill — here's where you should eat instead

SEE ALSO: New York City resident reveals why he chooses Olive Garden over some of the best restaurants in the world