Americans want US goods, but not willing to pay more 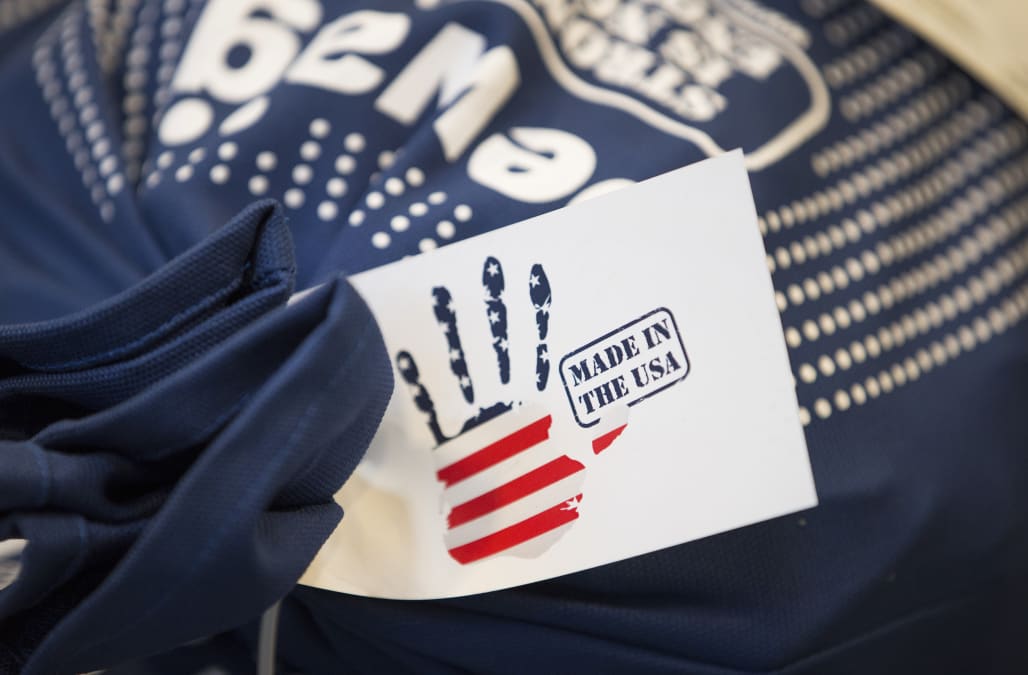 HARRISBURG, Pa., July 18 (Reuters) - Americans say they love U.S.-made goods. They are less enthusiastic, however, about paying a premium for them.

At the AMES Companies Inc factory here, the wheelbarrows coming off the assembly line once every six seconds cost the company more to make in the United States than abroad, but U.S. retailers generally will not charge more for them because consumers would balk, AMES President Mark Traylor said.

A Reuters/Ipsos poll released on Tuesday found 70 percent of Americans think it is "very important" or "somewhat important" to buy U.S.-made products.

RELATED: "American" products that are no longer made in the USA

American products that are no longer made in America

Don’t be fooled by Budweiser’s re-brand. The cans may say “America” on them, but this beer is now owned by a Belgian company.

Budweiser beer dates back to the 1880s when a German, Adolphus Busch, moved to St. Louis and married the daughter of a local brewer, Eberhard Anheuser. The two became partners, but Busch eventually took over the business and created the light, crisp lager we have today and his brewery became the nation’s largest producer.

America’s iconic ice cream brand Ben & Jerry’s was started by best friends Ben Cohen and Jerry Greenfield after they purchased an old gas station and turned it into a scoop shop in 1978.

In 2000, the brand was bought by multinational consumer goods company Unilever, for $326 million.

In 1967, the duo sold the chain to the Pillsbury Company and it became the second-largest burger chain in the US after McDonald's. In the decades that followed, the chain changed hands several times after a series of mergers and acquisitions with its parent company, before going public in 2006. In 2010 it was sold to private equity firm 3G Capital and went back to being privately owned.

Today, it's part of Restaurant Brands International, a Canadian fast food company that was formed when Burger King merged with Canadian coffee and donuts chain, Tim Horton’s. It is still backed by 3G Capital.

Trader Joe’s dates back to 1967 when California-based convenience store owner Joe Coulombe decided to start stocking obscure and discontinued foods in order to give himself an edge over impending competition from 7-Eleven.

The first Trader Joe’s store is still open in California but the business has since changed hands. It was bought by Theo Albrecht, the owner of German supermarket brand Aldi Nord, in 1979.

Lucky Strike, once America's top-selling cigarette brand, was established in 1871 in Virginia and subsequently taken over by a large American tobacco company.

It fell into the hands of the Brits in the '70s when the British American Tobacco company bought its former owner.

General Electric appliances have been a staple for US consumers for over a century, made special by their “Made in America” logo.

But this may change. In 2016, the brand was bought by the world’s biggest appliance company, Haier, a Chinese company, for $5.4 billion.

California brand American Apparel made a name for itself with its “Made in USA — Sweatshop Free,” slogan, and claimed that it was the largest clothing manufacturer in North America. This business model worked for two decades, but in 2015 the company filed for bankruptcy and spent two years trying to recover.

It didn’t work, and in 2017, Canadian clothing company Gildan bought the intellectual property rights and some of its manufacturing equipment for $88 million.

French’s mustard made its cameo appearance at the St. Louis World’s Fair, when the two sons of its founder, R.T. French, dished out the new mustard with hot dogs. It didn’t take long for the company to be bought; in 1926 it was acquired by a UK company.

Today, it’s owned by Reckitt Benckiser Group Plc, who also own other major brands such as Durex condoms and Strepsils.

We have Jefferson Green to thank for convenience stores. Green was a Southland Ice Company employee in 1927 when he started selling milk, bread, and eggs from the ice house on Sundays and holidays when everything else was closed, according to the 7-Eleven company website. He renamed his store 7-Eleven to reflect the store’s opening hours from 7am to 11pm. This laid the foundations of the all-hours stores that we have today.

After the financial crash in 1987, the company was bought by Ito-Yokado, part of Seven & I Holdings, the Japanese parent company of the store today.

Sunglass Hut has its roots in Miami where Optometrist Sanford Ziff set up a kiosk in a mall in the city in 1971. By 1986 he had opened his 100th store. The Ziff family sold their share of the business in 1991.

Today, it is owned by Italian eyewear company Luxottica, who bought the chain for $462 million in 2001.

The first Holiday Inn hotel was opened by businessman Kemmons Wilson in Memphis, Tennessee. Wilson came up with the idea while on a family trip to Washington D.C. after he found there were no comfortable and affordable places for families to stay. His business was taken over InterContinental Hotels Group (IHG) between 1988 and 1990, and IHG has stayed its parent company ever since.

The French may have been the first to invent mayonnaise but Hellman’s is responsible for making it a staple condiment in most American kitchens. German immigrant Richard Hellmann opened up a delicatessen in New York City in 1903 and found that his homemade condiment was so popular that he started to sell it separately.

U.S. President Donald Trump rode into office on promises of bringing back manufacturing jobs and boosting economic growth, and has criticized companies that move production overseas.

Trump has also been quick to promote U.S.-made goods, and on Monday released a state-by-state "Made in America Product Showcase" that included AMES wheelbarrows.

Lower-income Americans were the most enthusiastic about buying U.S. goods, the poll showed, despite being the least able to afford paying extra for them.

Indeed, the biggest U.S. retailer is well aware of the priority buyers place on price above all else. A spokesman for Wal-Mart Stores Inc said customers are telling them "that where products are made is most important second only to price."

The good news for U.S. factories is that Americans like the quality of many domestic goods.

Thirty-one percent in the poll said American-made cars are the best in the world. German cars were voted best by 23 percent of respondents. And thirty-eight percent said U.S.-made clothes were best.

Still, domestic manufacturers could be in trouble if they fail to capitalize on perceptions about the quality of their products while also keeping a tight lid on costs.

In order to compete, companies like AMES have to find ways to offset their disadvantage

"We don't have to be as cheap as imports," says Traylor, who estimated he sells his wheelbarrows to U.S. retailers for about 10 percent more than importers.

Factors like cheaper domestic freight and a desire among retailers to carry lower inventories can help make up some of the cost differential.

AMES is also better positioned than overseas suppliers to help retailers be agile. When spring comes early, for example, AMES can respond quickly to ship goods to stores, Traylor said, something importers with longer lead times on orders struggle to do.

Traylor said another secret to success for U.S. manufacturers is investing in technology to cut costs.

AMES, a subsidiary of New York-based Griffon Corp, is pouring $50 million into upgrades at several locations. The Harrisburg factory, built in 1921, is dotted with aged machinery that has been fitted with robotic attachments to reduce reliance on human labor.

The company said it recently convinced a major retailer, who they did not want to identify, to switch from Mexican-made wheelbarrows to carry their product.

AMES also said business is so strong that it is hiring 100 employees across its five Pennsylvania locations, including the Harrisburg factory.

Traylor says AMES wants to bring more work back from overseas. But that can be difficult.

And the production of certain components may prove impossible to ever bring back to U.S. soil.

In late April, Trump marked his 100th day in office with a visit to the AMES plant. With workers chanting "USA, USA," Trump asked if every part of the wheelbarrows was made in America.

Everything, he was told, except the Chinese-made tires.

U.S. manufacturers stopped large-scale production of air-filled tires for garden equipment years ago, and the cost of setting up production now would be hard to justify for the low-margin product.

Some rubber makers still manufacture solid rubber tires in the United States, but the last time AMES bought any they cost nearly twice the roughly $7 they pay for a Chinese tire, a big added cost for a wheelbarrow that often retails for less than $100.

"Is it feasible to get U.S.-made tires?" asked Mark D'Agostino, the company's vice president for supply chain. "We don't know yet."

To be sure, some manufacturers can command a big premium for American-made products.

Klein Tools Inc, a privately held company based outside Chicago with annual sales of $500 million, makes hand tools that are highly sought after by electricians and other workers.

A pair of 9-inch Klein pliers sells for about 30 percent more than a comparable import.

But betting on the allure of American-made goods can be risky.

In 2012, High Point, North Carolina-based Stanley Furniture Co brought back production of cribs and other baby furniture from China to a U.S. plant, wagering that parents worried about a string of Chinese factory quality scandals would pay $700 for cribs nearly identical to imports selling for $400.

Customers refused to bite, however, and the High Point factory closed in 2014.

Still, Stanley Chief Executive Glenn Prillaman said the Trump administration's emphasis on American-made goods is a hopeful sign that resonates with "people that work for a living," because they can see how it impacts their own jobs.

"The lower-end consumers certainly care, and that's a good thing," he said. "But they're also not in a position to pay the premium."