This $130,000 self-deploying building can unfold in just eight minutes 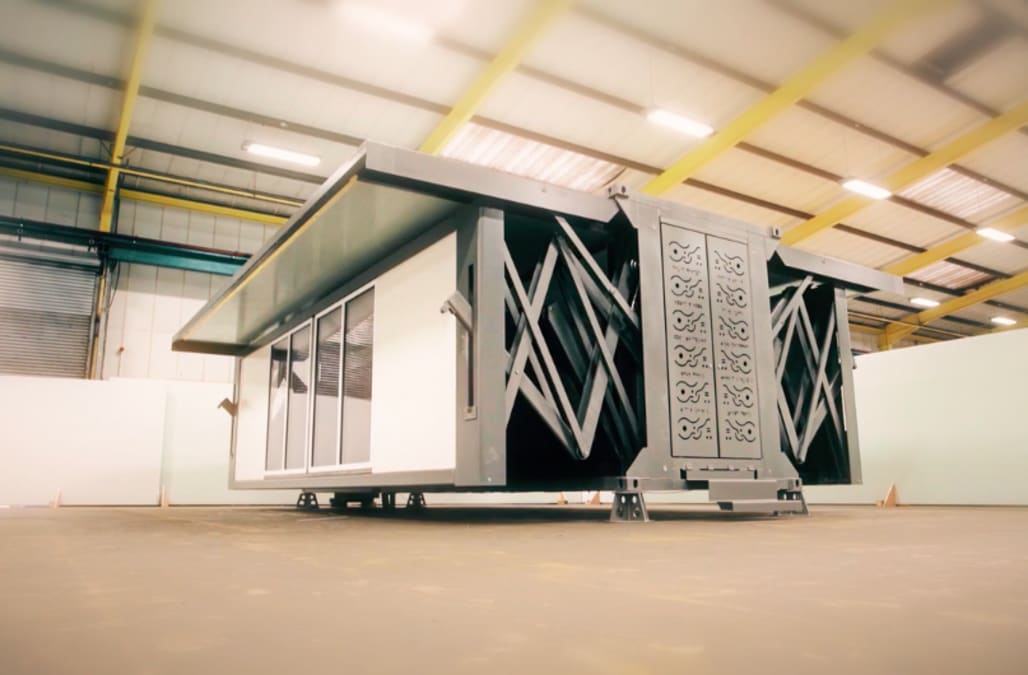 Building a home or temporary shelter by hand can be both time-consuming and expensive.

Ten Fold Engineering, a housing startup based in the UK, has created self-deploying buildings that can pop up in a matter of eight minutes. Owners push a button, and the rooms fold out like an accordion using a counterbalance system.

The company claims that once a home folds out, its parts only need to be secured with an electric drill.

The buildings each measure approximately 689-square-feet, and could have a variety of uses, from medical clinics to offices to camping shelters.

If a shotgun-style house and a cabin had a love child, this one-bedroom, one-bathroom modern cabin would be it. At 400 square feet, the home is adorably tiny and perfect for weekend retreats exploring neighboring Grand Teton National Park in rural Wyoming. Or take a day trip to Yellowstone!

Although this home, constructed in 1828, once cost only $600, today it’s listed at a cool $3.245 million. And though that price tag may seem outrageous, it’s actually a pretty good deal when you consider there are six apartments in the home, ranging from studios to two-bedroom units.

Between all the fan theories, spoilers, and episode reviews, if there’s anything that garners mass attention on the web, it’s Game of Thrones. So it’s no surprise that this mountainside home fit for Daenerys Targaryen generated a lot of views. (Seriously, did you see the dragons on the fireplace?)

Didn’t you hear? Beach homes are so 2016. Sound homes are all the rage now. Take this 5,893-square-foot home right on the Puget Sound. With an open floor plan, three bedrooms, a bonus room, and a convenient garage for your canoes, you won’t miss weekend trips to the beach.

One mermaid cottage for you: Galveston, TX

What, pray tell, is a mermaid-style commissary cottage? You’re looking at it! Galveston, TX, is known for a significant collection of 19th-century architecture, including commissary homes — which are more commonly known as shotgun homes in other areas of the country

And another mermaid cottage for your best friend: Galveston, TX

That’s right, there’s another bright Galveston cottage right next door — and it made our list! Fact: This little beauty got more likes on Trulia’s Instagram than its blue next-door neighbor. We’re digging the new finishings inside, including that on-trend sliding barn door. So chic.

Now a historical national landmark, the Granot Loma estate was built by financier Louis G. Kaufman in 1919. Kaufman intended for the log cabin, situated on a peninsula jutting into Lake Superior, to be a wilderness escape — hence the totem poles, taxidermy, and copious amounts of stonework inside. It’s said to be the biggest log cabin — 26,000 square feet — in the world.

Way before tiny homes were trendy, San Francisco, CA, championed the petite-home fad — out of necessity. The devastating 1906 earthquake and resulting fire destroyed 500 city blocks and left over half the city’s population homeless. The solution? Small wooden cottages. Although they’ve been moved and often altered in size, a few still exist — like this adorable example in Bernal Heights.

Nature lovers rejoice, this home is for you! The 17-acre property actually has three structures on it, with multiple patios, pergolas, ponds, and even a four-season, fully insulated yurt. Because of the property’s proximity to the Ashokan Reservoir, the state Department of Environmental Protection safeguards the area. Refreshing, eh?

Was it the Hilary Duff–inspired caption or the cuteness of this Portland, OR, cottage that endeared this home to Trulia’s Instagram followers? We’ll never know. In any case, the meticulously remodeled three-bedroom, one-bath cottage is the perfect starter home.

A style inspiration in the Lone Star State: Austin, TX

This loft-style Austin, TX, home can be summed up in two words: effortlessly stunning. From the vaulted, bamboo-covered ceilings to the exposed bathroom wall framing to the lofted bed and, finally, to the veiny marble backsplash, this home is a feast for the eyes.

Tucked in a lava rock canyon (impressive!), this four-story cabin near the Santa Clara River is a perfect escape from the hustle and bustle of everyday. Built in 2000, the 10,000-square-foot home is covered in pristine knotty pine. Who’s ready to roast marshmallows in the backyard?

If an owner want to move their building, they can push another button to fold it back up. The structures are also lightweight enough to be transported by truck, according to the company.

People can order one, starting at $129,330, by contacting Ten Fold through its site.

Check out how the technology works below (This home extends to about three times its original size):

NOW WATCH: Here's how Google Maps knows when there is traffic