Jamie Fertsch, Founder of NextDesk, revolutionized the standing desk market -- All while pregnant with twins 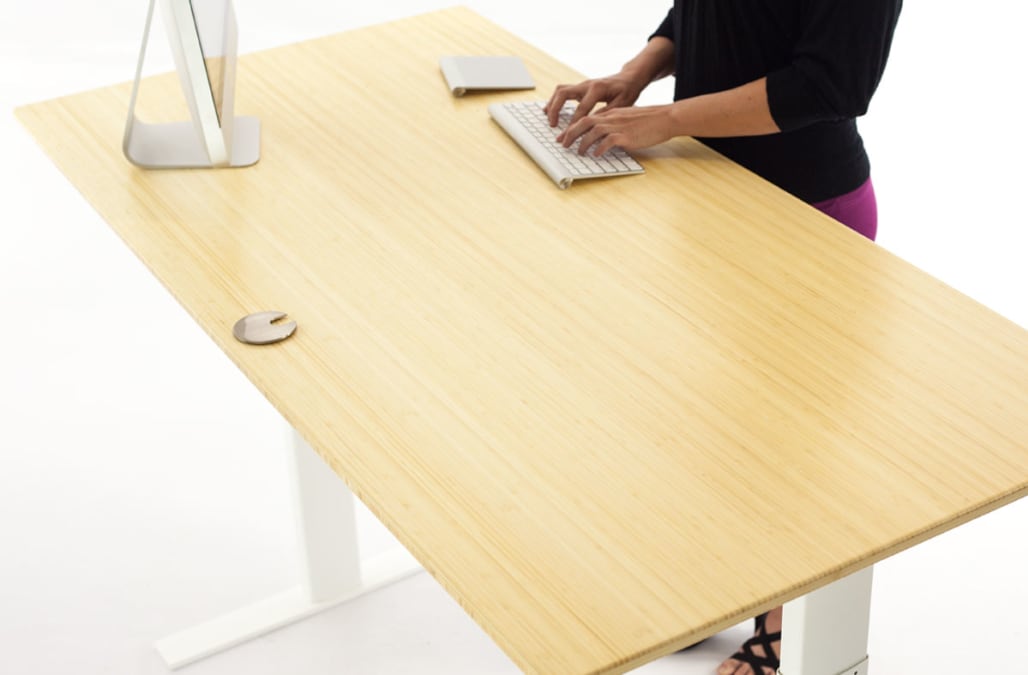 No matter what excuse you use, one thing's for certain — working a 9-5 can make it extremely difficult to prioritize health and making the workplace somewhere that's conducive to a healthy lifestyle

Then sprinkle in being a wife, entrepreneur and finding out you're pregnant with twins and you have yourself a nearly impossible feat.

But not for Jamie Fertsch, co-founder and director of NextDesk, the start-up that has revolutionized the standing desk, allowing employees to switch their desks via a microprocessor-controlled lift system from seat level to standing level in a matter of seconds.

The desks are crafted from environmentally-friendly material, and designed in a sleek, minimalist fashion, making them both aesthetically-appealing and completely functional.

Six short months after building the first model in her living room with her husband, Jamie left her 9-5 job at a wealth management firm to focus solely on NextDesk, which has since grown to a team of over 30, showing nearly 600 percent growth in demand for the desks themselves.

We had the chance to chat with Jamie about quitting a stable job to pursue a startup, doing so while pregnant, and how to keep that balance between being a mom and a career powerhouse.

AOL: Was being an entrepreneur something you always knew you would end up doing or did it just happen by chance?

Jamie Fertsch: "Right after college, I was working for a financial management group...I was basically in charge of people's retirement plans, retirement accounts, managing those, administering them and for big companies, but also for entrepreneurs — A lot of the company owners were some of my clients. That's kind of where it all started probably — When I was 22, that was something that in the future, I wanted to do.

NextDesk took about a year to kind of plan out while I was still at work at the financial management group. It was about a year-long process between the initial idea and doing the research before I actually made that transition."

AOL: Where did you find the inner confidence to make that jump? How did you deal with any sense of doubt/ambivalence you may have had in making this decision?

JF: "Surrounding yourself with people who are like-minded, who are hard workers, who are very driven, is a huge motivating factor. But at the same time, growing up, I've always just been [a person who will] do what I want, and what I need to do, and get to where I need to be. So, I would say it was definitley a combination."

AOL: How did the idea for NextDesk come about?

JF: "In my prior job, i worked a lot with our lifestyle department...they went into different employers' offices looking for ways to make [companies'] workforce a little bit better, a little more healthy. That's when the whole 'standing' trend started, back in 2010 and 2011. And there was nothing on the market at that time that was a beautiful desk that people would really want to work at. So that's where the idea came from — there was a very big need for a really nice office space desk where you could stand up."

AOL: How did finding out you were pregnant affect the beginning of NextDesk? Where in the timeline did you find out you'd be becoming a mother?

JF: "The funny part about my pregnancy was that I actually found out my very last day at the financial management group. I was on my way home when my nurse called me and said 'We're pretty sure you're pregnant with twins' — It was literally one transition into another! There really wasn't anytime to think about it, it was just like 'Alright, I'm pregnant with twins! Let's see what we're gonna do here!' There was no thought, it was just 'Keep going.'"

AOL: Did you ever consider taking any time off to juggle?

JF: "I don't even think I really thought about it. I had a pretty easy twin pregnancy...I just kept going, you surround yourself with people who are there to help you, as well — That was the most important part of everything, to be able to keep going, that I was surrounded by people who were willing to jump in and help."

AOL: Who did you find yourself leaning on the most while trying to balance new motherhood and being an entrepreneur, mostly people in your professional life or personal life?

JF: "It was honestly always the people who were closest to me that really helped, just somebody that you can lean on and trust."

AOL: How has being a mom impacted the culture of your company as a whole? How do you see it affecting the NextDesk work environment?

JF: "Being a mom changes your perspective on everything. It makes you more maternal, it makes you more empathetic and sympathetic. It opened me up to our employees — I like to think that they can come to me with anything and I think most of them feel that way as well. Most of them have even told me that they're really glad that they can come to me, and I think that being a mom has softened that part of me quite a bit."

AOL: What qualities do you think are crucial to being both a successful mom AND entrepreneur?

AOL: If someone was on the fence about maintaining a career while having children, and weren't sure they would be able to balance both, what would be the advice that you would give them?

JF: "You can definitley do both, and succeed at both! And I honestly believe that women who are stay-at-home moms are just as hard of workers — It is a big job and you know, if that's what you want to do, definitley go ahead! You're setting your child up for a lifelong role model at that point."

AOL: What's next for NextDesk — do you see yourself slowing down as your kids get older?

JF: "I think the fun part about [my twins] getting older is that I'm able to do more. Having newborn twins is very time-consuming, so as they're getting older it's getting much easier. And it's getting easier to launch new ideas, and really start going full-force again."

More on AOL.com:
HubSpot is going to give one lucky person $100,000 to start his or her dream business
Science says your oldest child will be a CEO (and younger kids will be entrepreneurs)
1 trait great leaders possess more than any other