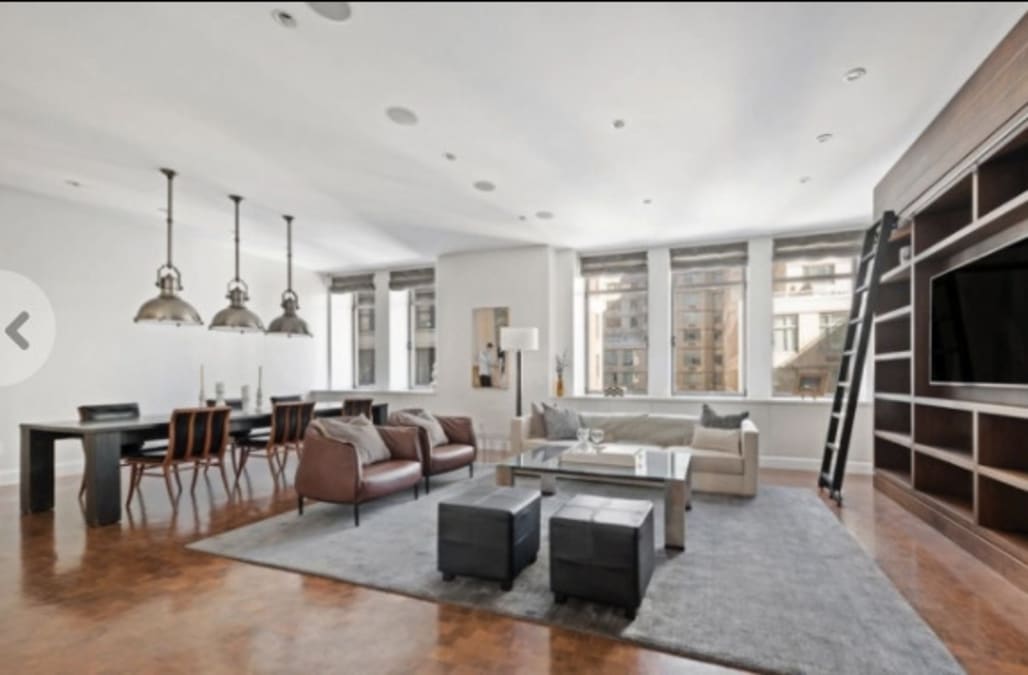 Celebrity chef and international restaurateur Bobby Flay, host and exec producer of reality TV cooking competition "Beat Bobby Flay," has had a tough time selling off a luxury duplex condo in New York City's Chelsea neighborhood. But rather than going the customary route of a price reduction to entice potential buyers, he raised the asking price from $7 million to $7.25 million.

The duplex condo, in the same building where Katie Holmes holed up after she split from Tom Cruise, is a combination of two units, the first acquired in September 2000 for $815,000, and the second in early 2005 for $1.5 million. Together, they measure in at a bit more than 3,200 square feet with three bedrooms and three bathrooms.

Get an inside look of the digs by clicking through the slideshow below:

The lower level offers a foyer with custom switchback staircase, a combination living and dining room with a full wall of floor-to-ceiling bookcases and an open-plan kitchen cleverly designed to keep work areas out of view of the living and dining area. There's an oversize walk-in pantry tucked up under the stairs, and just off the kitchen, behind a wall of steel-trimmed casement windows, an office is lined along three walls with built-in desks and bookshelves. There's one bedroom and a bathroom downstairs; upstairs, along with a 27-foot-long family/media room with zinc-topped built-in bar, there's another guest bedroom and bathroom plus a master suite with two walk-in closets and an en suite marble bathroom.

Property records indicate Flay continues to own a one-bedroom and one-bathroom, Hudson River-view apartment in a Trump-branded building on the Upper West Side of Manhattan purchased in 2008 for $1.45 million, as well as a nearly three-acre estate secreted down a private lane in a thickly wooded area of East Hampton, N.Y., picked up over the summer of 2009 for just about $1.5 million.

More from AOL.com:
John Legend and Chrissy Teigen's former Hollywood Hills home is for sale
Emma Stone is 'grateful' to male co-stars for taking pay cuts to make things 'equal and fair'
James Harden signs the richest extension in NBA history and will make $47 million in the final season of the deal