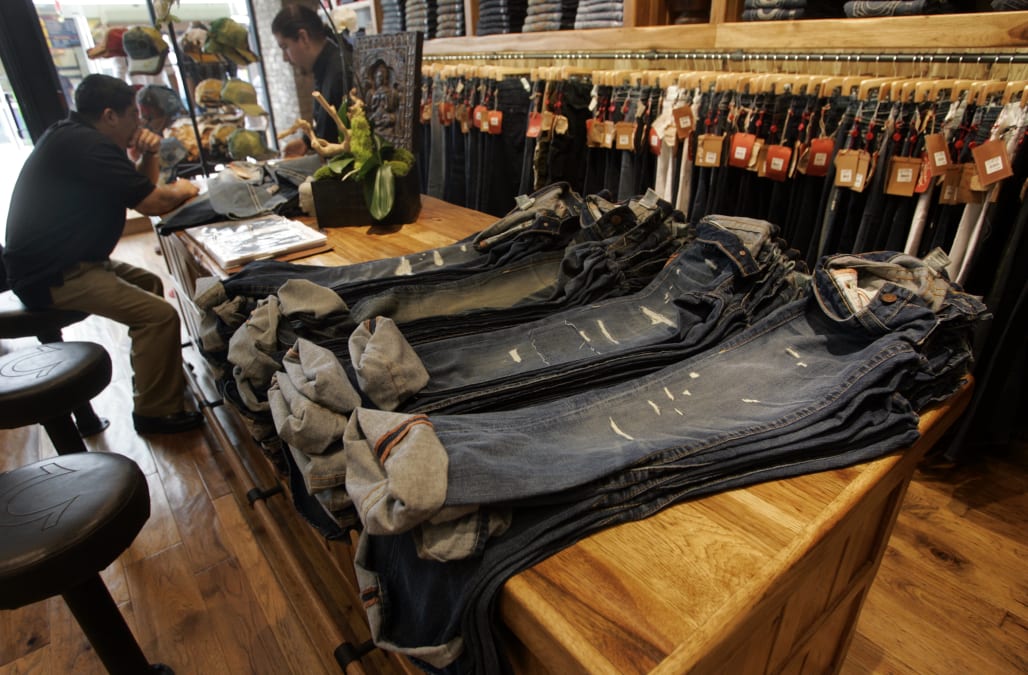 July 5 (Reuters) - U.S. denim retailer True Religion Apparel Inc said on Wednesday it filed for bankruptcy protection and signed a restructuring agreement with a majority of its lenders.

True Religion, a company whose denims have gradually fallen out of style, filed for creditor protection under Chapter 11 in the U.S. bankruptcy court in the District of Delaware, and listed assets and liabilities in the range of $100 million to $500 million.

The restructuring agreement with lenders, including TowerBrook Capital Partners, will slash the company's debt by over $350 million, it said in a statement.

"After a careful review, we are taking an important step to reduce our debt, reinvigorate True Religion's iconic brand and position the company for future growth and success," True Religion Chief Executive John Ermatinger said in a statement.

True Religion said its trade creditors critical to the business were expected to be paid in full and the company would continue to operate business as usual.

Formerly knows as Quiksilver, Boardriders sells apparel for ocean sports, winter activities, and skaters. The company has already survived one bankruptcy in February 2016, and at the time CEO Pierre Agnes seemed confident in a revival.

"The renaming of our company signifies the beginning of a new day at Boardriders," he said then in a press release. "Our teams around the world have been building our resurgence brick by brick. Their passion and tireless execution, along with the loyalty of our customers, suppliers, and partners, has allowed us to complete the restructuring phase of our turnaround and to begin shifting our focus to growth."

Bon-Ton operates under a variety of names.

The so-called "retail apocalypse" has hit department stores especially hard. Bon-Ton, which has 261 stores, including nine furniture galleries and five clearance centers in 25 states, has been no exception. The company operates under a number of names, including Bon-Ton, Boston Store, Bergner's, Carson's, Elder-Beerman, Herberger's, and Younkers.

Supermarkets are not immune to the ongoing retail turmoil.

A supermarket chain that operates Fairway Markets, Fairway Group Holdings has already declared bankruptcy once, in 2016. The chain, which bills itself as "like no other market," emerged from that filing in June 2016 with "approximately $50 million in cash, a substantial reduction of its debt by $140 million, and a reduction of Fairway's annual debt service obligations by up to $8 million," according to a press release.

That appears to have not been enough, as growing competition has put the company in dire straits once again.

Tops Markets are teetering on the edge like many chains. Image source: Getty Images.

Another supermarket chain, Tops Holding II, operates as Tops Friendly Markets. The chain, which uses the tagline "your neighborhood store and more," runs 172 corporate full-service supermarkets under the banners of Tops and Orchard Fresh, with an additional five supermarkets operated by franchisees.

Just because a chain offers low prices does not guarantee success.

Discount chains have largely done well as full-price retailers have struggled. That's not true for 99 Cents Only Stores, which has struggled to compete with rivals such as Dollar General. The chain, which began in the 1960s, operates 350 stores in California, Texas, Arizona, and Nevada.

Toms was founded on the idea of giving back.

The footwear company that was built on a charitable model of donating one pair of shoes for each one it sells may soon need some charity of its own. Toms has given away over 60 million pairs of shoes to children in need since its founding in 2006, and it has increased its charitable efforts into other areas, including creating jobs by making its shoes in countries where it has donated them.

A chain that sells wedding and bridesmaid dresses along with other wedding items, David's Bridal has 300 stores in the U.S., along with locations in Canada and the United Kingdom. The company sells in a variety of price ranges but would be considered "affordable," at least compared with most chains and independent shops in the wedding space.

Savers takes donations and then resells them.

Evergreen AcqCo 1 LP operates Savers, a retail chain that takes community donations and then resells them. It's a secondhand store that pays local non-profits a portion of its proceeds as directed by the consumers who make the donations.

The chain has over 330 locations in the U.S. and Canada. It helps "more than 120 nonprofit organizations by paying them for donated goods," according to the company's website, and it " keeps more than 700 million pounds of used goods from landfills each year."

A mall staple, Charming Charlie has been hurt by the fact that fewer people are shopping in malls. The chain, which caters to younger consumers, is particularly vulnerable, given that that group has been the most willing to take its business online.

The company currently has over 350 locations, all in the U.S., built around the idea of offering "a breathtaking volume and variety of accessories," according to the chain's website.

A luxury brand that, according to its website, is known for using "luxe fabrications and innovative techniques to create a product assortment that combines urban utility and modern effortless style," Vince operates 40 stores and 14 outlet locations. The company has distribution in 40 countries in addition to its own retail locations.

The owner of the Cole Haan footwear company took over the footwear brand named after its founders, Trafton Cole and Eddie Haan. With a history that dates to 1928, the company has suffered in recent quarters as more consumers have been willing to buy shoes online. That's an emerging trend that's only likely to increase as technology makes things like sizing easier for consumers to do.

A chain specializing in trendy retail clothing, Charlotte Russe offers women's fashion, including a plus-size line. The chain focuses on younger shoppers, which may explain its vulnerability in the current retail environment. In addition, like many other brands on this list, the decline in mall traffic along with the rise of discount trendy clothing brands, has undercut its business.

Malls and department stores are not drawing the traffic they once did.

Large department stores are hurting, and Neiman Marcus has been unable to avoid the fate of its rival anchoring malls. The chain flirted with the idea of going public, but it dropped that idea given how challenging it would be in this retail climate. The chain has also had talks with Canadian retailer Hudson's Bay (NASDAQ: HDSN) about a buyout, though no offer has publicly emerged. In addition to Neiman Marcus, the chain owns Bergdorf Goodman, Last Call, and other retail/digital brands.

An iconic American brand, Sears Holdings (NASDAQ: SHLD) has been a sort of poster child for the current retail collapse. The chain, which operates Sears and Kmart, has been selling off assets, closing stores, and generally doing whatever it can to put off bankruptcy. That effort has so far been a failure, as despite being in full-on panic mode, there are few, if any, signs that the company's turnaround efforts will work.

Umbrellas have become easier to buy which makes it hard for Totes to compete. Image source: Getty Images.

The parent company of the Totes and Isotoner brands, Indra Holdings has suffered from the overall rise of the internet. Products such as Totes umbrellas or Isotoner gloves have essentially become commodities because they're so easy to buy online. That has diminished the value of these brands, which may be something that's hard for the company to recover from.

Operating under the name Motorpsort Aftermarket Group (MAG), Velocity Pooling Vehicle has put together numerous brands that make aftermarket parts for motorcycles, cars, and trucks. That's a challenging business now that the internet has made price comparisons easier, allowing for more competition from both major and minor players.

Chinos Intermediate Holdings owns J. Crew, yet another struggling mall retailer. The chain has suffered from the same mall trends affecting other members of this list. In addition, the company has faced increased competition from retailers including H&M, which specializes in trendy but inexpensive clothing, which makes J. Crew seem pricey in comparison.

The company recently replaced its longtime CEO, Mickey Drexler, who remains as chairman. Drexler admitted that his biggest mistake was pushing the brand into higher-priced items when the industry trended toward cheaper products, CNBC reported.

Everest Holdings operates the Eddie Bauer brand through a subsidiary. The retail chain has been hit by the same retail headwinds that have decimated the sporting-goods and outdoor-products industries. That has already led to the end of Sports Authority and bankruptcies at Gander Mountain, MC Sports, Golfsmith, Eastern Outfitters, and Sports Chalet.

Perhaps the phenomenon was best summed up by MC Sports CEO Bruce Ullery in a court filing reported on by USA Today.

"The rapid migration of sales from traditional brick-and-mortar retailers to online resellers, competing distributors, specialty retailers, and changing consumer preferences" contributed to his company's demise, according to Ullery. That's exactly what's bringing Eddie Bauer down and what makes a comeback unlikely.

Selling shoes has become a challenge for physical retailers.

A maker of shoes and accessories for women, Nine West is yet another mall retailer fighting for its life. The chain has a retail presence in 78 countries, according to its website, and it operates both full-price and outlet locations in the U.S.

Like the other shoe and accessory companies on this list, the company has struggled to compete in the digital era. That's a problem that's compounded by slowing traffic to the malls, where many of its stores are located.

Claire's sells a variety of jewelry and other accessories.

A chain that specializes in low-cost, impulse-buy jewelry for teenagers and younger girls, Claire's Stores, which also operates the Icing Brand, lives and dies based on mall traffic. The company had 2,680 stores in 17 countries as of April 2017, as well as 901 concession store locations, and 647 franchised shops in 26 countries.

If more customers don't go to stores than more chains will fail.

Another mall-based chain selling clothing largely to younger shoppers, True Religion has struggled for many of the reasons already mentioned. It also suffers from the fact that it's a once-trendy brand that's fallen somewhat out of favor. That's a difficult problem for many companies to navigate, as it's not easy to transition from hip trend-setter to long-term retailer, or even to ride the ebbs and flows of public opinion. Of course, it's also not helping True Religion that it sells $89 T-shirts and $189 men's shorts at a time when cheaper, trendier options are available.

The denim retailer's financial struggles are due in part to consumer tastes shifting toward online shopping and away from the brick-and-mortar shops and department stores where the company's jeans have been primarily sold.

True Religion has secured post-petition debtor-in-possession (DIP) financing from Citizens Bank for up to $60 million, the retailer said.

True Religion said the pre-arranged plan could take about 90 to 120 days to receive confirmation from the bankruptcy court.

Reuters reported in October that the retailer had hired a legal adviser to explore several debt restructuring options. (Reporting by Subrat Patnaik in Bengaluru; Editing by Amrutha Gayathri)