The coal industry is collapsing, and coal workers allege that executives are making the situation worse 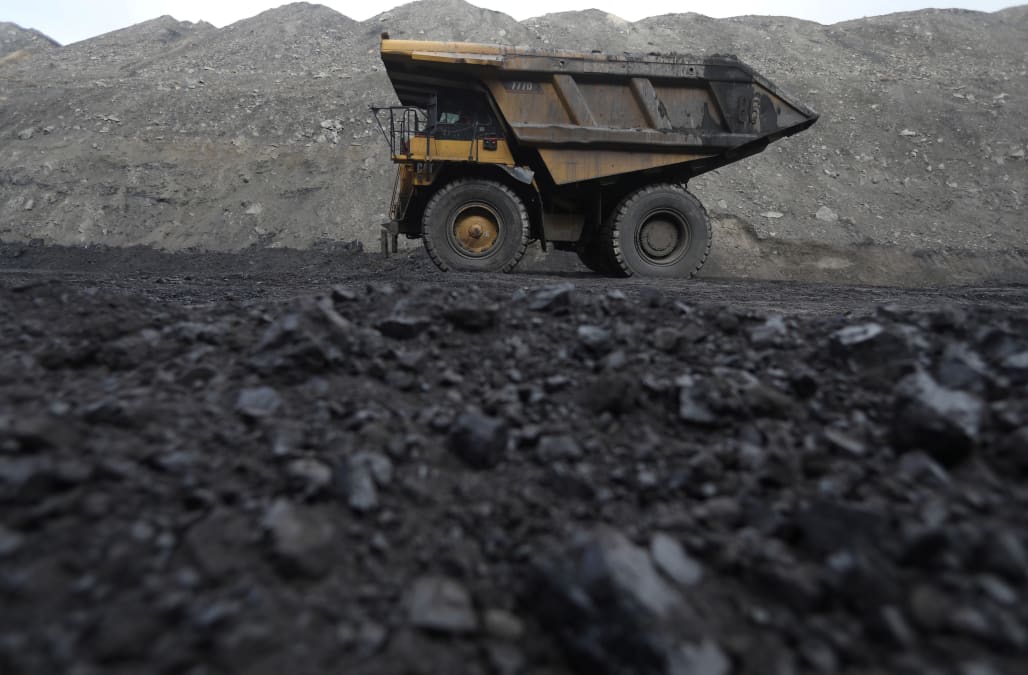 What's a coal miner to do when they're laid off, leaving them without much-needed insurance or their pension? What if it happens to the whole community at the same time?

"We knew it was coming, we just didn't know how hard it was gonna be. We're losin' everything," Regina Lilly, wife of a West Virginia coal miner who was laid off after their child was born, said in a new National Geographic documentary about coal mining.

The documentary, called "From the Ashes," explores the past, present, and future of coal mining, and is currently free on YouTube.

When mining companies move to new locations with cheaper coal, local residents like Lilly believe the coal companies "failed" them.

Coal mining in America
circa 1935: Two miners at work in an anthracite mine near Scranton, Pennsylvania. (Photo by MPI/Getty Images)
Blaine Sergent, coal leader, putting up his check at end of day's work. Lejunior, Harlan Co., Ky. Sept. 13, 1946. | Location: Lejunior, Kentucky, USA. (Photo by ï¿½ CORBIS/Corbis via Getty Images)
Row of Coal miners shanties on Elk River at Bream, W. Va. Location: Bream, West Virginia (Photo by Lewis W. Hine/Buyenlarge/Getty Images)
A coal miner stands on his front porch with his wife and their two children, in Bertha Hill, West Virginia, September, 1938. (Photo via Smith Collection/Gado/Getty Images).
(Original Caption) One of the earliest battlegrounds in the current strike of Miners of the steel companies 'captive' coal mines is pictured here. The scene is the captive mine of the united States Coal and Coke Company in Gary, West Virginia. Various weapons were brought into play, as members of an Independent Miner's Union engaged in a free for all with striking United Mine worker's pickets who sought to bar their entry. Two men were shot here. A skirmish is shown in progress on the battleground, as the men in the center of the photograph are being wetted down by a stream of water from a fire hose directed from inside the building.
Group portrait of boys working in #9 Breaker Pennsylvania Coal Company, Hughestown Borough, Pittston, PA, 1908. (Photo by Lewis W. Hine/Buyenlarge/Getty Images)
Photograph of Breaker Boys and Woodward Coal Breakers, Kingston, Pennsylvania. Dated 1906. (Photo by: Universal History Archive/UIG via Getty Images)
UNITED KINGDOM - MAY 31: Photograph by Herbert William Hughes (d 1937). Hughes was elected a member of the Royal Photographic Society in 1893, and became a fellow two years later. (Photo by SSPL/Getty Images)
Coal Miners Using Automatic Conveyor (Photo by George Rinhart/Corbis via Getty Images)
(Original Caption) Coal mining: Young boys working in Pennsylvania coal mine before the introduction of the child labor laws. Photograph ca. 1895 shows them standing with horses at mine entrances.
Red Jacket, West Virginia. Miner and wife with 5 children outside of tent.
Three Coal Breaker Boys, Woodward Coal Mines, Kingston, Pennsylvania, USA, circa 1890. (Photo by: Universal History Archive/UIG via Getty Images)
(Original Caption) Mine 'Tipple Boy', West Virginia coal mine. Photograph by Lewis Hine, 1908. BPA 2 #3116.
Portrait of 15-year Old Boy Working as Trapper at Coal Mine, His only Job is to Open and Close the Door, West Virginia, USA, circa 1908. (Photo by: Universal History Archive/UIG via Getty Images)
Striking coal miners return to work at the Haveco Mine in West Virginia. (Photo by Library of Congress/Corbis/VCG via Getty Images)
(Original Caption) 12/29/1951-West Frankfurt, IL- Weary and covered with coal dust after spending eight hours in the New Orient mine at West Frankfort, IL, John L. Lewis, United Mine Workers' head, pauses to answer reporters' questions. Lewis and other investigators are seeking the cause of the blast which recently took the lives of 119 miners.
Up Next

In one example portrayed in the documentary, Alpha Natural Resources sent letters to 100 workers about upcoming layoffs. These "WARN notices" are generally sent to workers two months before a round of layoffs, giving them time to find new jobs. However, some coal workers still face unexpected layoffs, like Lilly's husband Cecil, who didn't know he was laid off until he went into work.

"It's just heartbreaking now that they closed down they take their workers' pensions, they take their retirements, their savings, anything they had in the company. They file bankruptcy...As long as they got their money in their pocket they don't care," said Lilly. In the documentary, Mary Anne Hitt, director of Sierra Club's Beyond Coal campaign and a West Virginia resident, described the aftermath of a mine layoff as a "life and death struggle" for local communities. She described the scene as one she's seen time and again, where coal companies "want to shed their obligations to workers, that includes pensions and healthcare commitments."

When coal mining jobs go, entire communities lose their livelihoods, making it hard to bounce back. Hitt alleged that this is now happening on an "unprecedented scale."

After "From the Ashes" came out, John Oliver dedicated an episodeof his show "Last Week Tonight" to exposing the corruption in the coal industry, based partially on the documentary.

In a tale familiar to coal communities, Oliver highlighted the story of when Alpha Natural Resources filed for bankruptcy two years ago. CEO Kevin Crutchfield appeared on television with tears in his eyes talking about how he felt for his coal workers. However, Oliver found court documents stating Alpha later asked its bankruptcy trustee if the coal company could save $3 million by cutting health and life insurance benefits of around 1,200 non-union retirees — so that the company could then pay $11.9 million in bonuses to fifteen top executives, including Crutchfield.

Coal miners overwhelmingly supported President Trump in the 2016 election. Trump appealed to the loss of coal jobs in Appalachia, and blamed the loss on environmental regulations — but statistics show natural gas is pricing coal out of the market, not regulations.

"From the Ashes" will be available free on YouTube until July 3rd.

Watch the full From the Ashes documentary free below:

NOW WATCH: This Yale biologist has a fascinating theory of how women changed human evolution