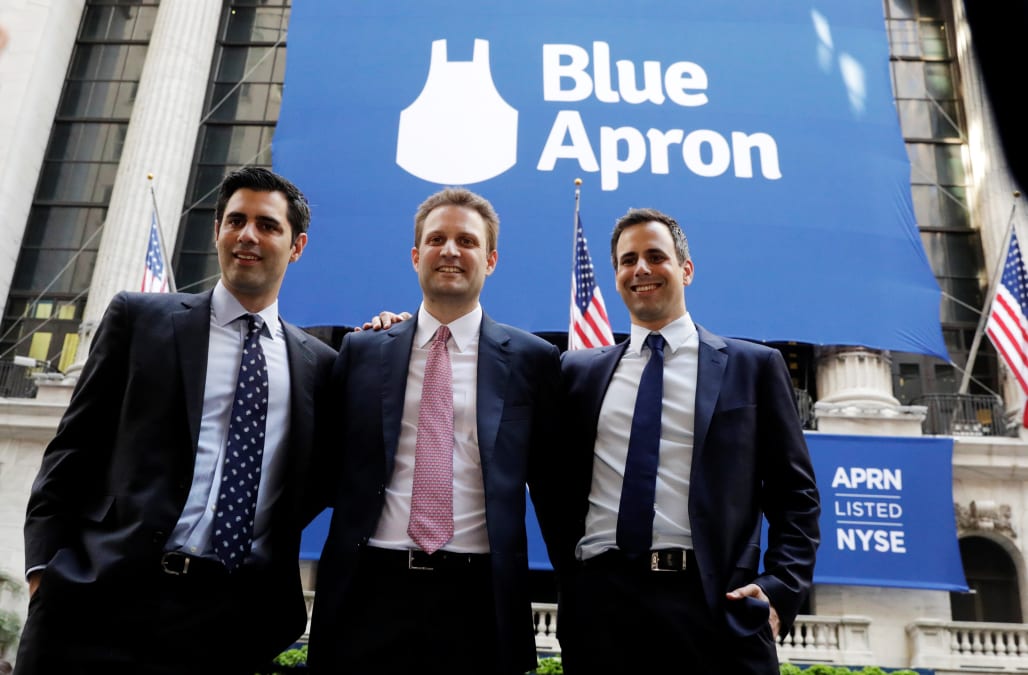 June 29 (Reuters) - Blue Apron Holdings Inc's shares rose as much as 10 percent in their market debut on Thursday following the meal-kit delivery company's watered down IPO under the shadow of Amazon.com's deal to buy Whole Foods Market.

The stock touched a high of $11, giving the company a market capitalization of about $2 billion, before paring gains to trade at $10.17.

The 30-million share offering was priced at $10 per share late on Wednesday, after the company slashed its valuation expectations by a third.

Blue Apron's IPO, the first for a U.S. meal-kit company, was expected to create a buzz around smaller peers, which are either looking to go public or be acquired at rich valuations.

However, Amazon.com's $13.7 billion deal to buy Whole Foods Market Inc has left potential investors worried about the prospects of the meal-kit industry.

Blue Apron spent roughly 18 percent of its $795.4 million revenue in 2016 on marketing, posting a net loss of $54.9 million. It has also faced steep costs of building out delivery infrastructure for fresh food.

Some analysts say even after the valuation cut, Blue Apron's stock is still over-valued considering the immense pressure on its ability to turn a profit and retain customers.

According to the company's IPO filing, 90 percent of the meal-kit delivery service's customers abandon the service within a year of their first purchase.

It is also only making about 5 percent of profit margin per customer even before considering other fixed costs like R&D, spending around $175 to acquire a customer that yields only $190 of gross profit on $600 of revenue, consumer research firm ValuePenguin said.

"Assuming this trend continues, Blue Apron will have to acquire more than 4 million new customers, which is about 3 percent of American households, every year, just to break even," said DJ Kang, senior vice president at ValuePenguin.

Kang also said the founder and chief executive of the company, Matthew Salzberg, has been selling his shares since 2014 even as his sale prices have been declining.

Salzberg, who founded Blue Apron in 2012 with Matt Wadiak and Ilia Papas, sold his shares at $16.66 per share in 2014, and again in October 2015 at $13.33 per share, according to the filing. (Reporting by Aparajita Saxena in Bengaluru and Angela Moon in New York; Editing by Anil D'Silva)