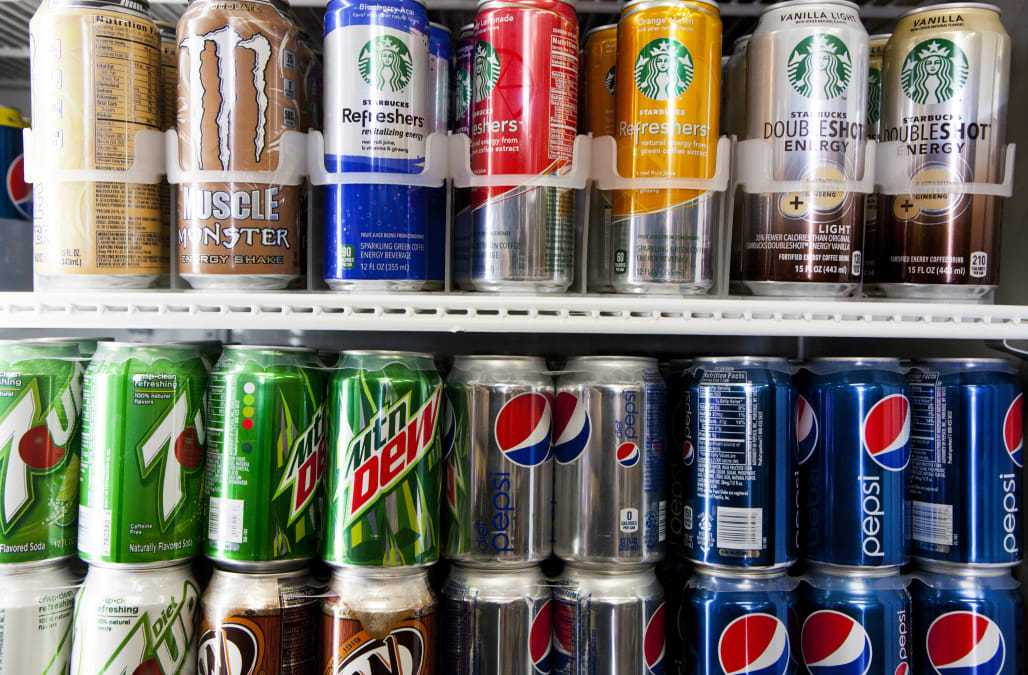 Americans have learned that while Coke may be "it" and that "nothing else is a Pepsi," drinking a lot of soda has negative health consequences.

That's an obvious lesson, but it's one that has led to not only a drop in sales for Coca-Cola (NYSE: KO) and PepsiCo (NYSE: PEP), but also for water to have overtaken soft drinks in 2016 sales. It's been a major fall for some well-loved drinks, which has included some stunning drops for America's fastest-declining soda brands.

The biggest losers, Diet Coke and Diet Pepsi, may seem like healthy alternatives to their full-sugar sister brands, but changing attitudes has led them to being America's fastest-declining soda brands at a time when the overall market for sodas in general has declined steeply.

What's happening in the beverage market?

Americans have finally accepted the idea that soda can harm their heath. That has led to an increase in bottled-water consumption.

In 2016, each person in the United States drank 39.3 gallons of bottled water, compared with 38.5 gallons of carbonated soft drinks, according to data from Beverage Marketing Corp., Reuters reported. That's a dramatic drop for soda consumption from its heights in the late 1990s and early 2000s of over 50 gallons per person.

"When Perrier first entered the country in the 1970s, few would have predicted the heights to which bottled water would eventually climb," Beverage Marketing Corp. CEO Michael Bellas told Reuters.

Which brands are America's fastest-declining sodas?

In the 1980s, 1990s, and even some of the 2000s, people believed that substituting diet soda for regular counted as being healthy. That made sense on a pure-calorie basis, but it proved to not be true when people began considering what went into diet sodas. That led to a rejection of diet sodas, which knocked the two industry leaders -- Diet Coke and Diet Pepsi -- off their thrones.

In 2016, Diet Pepsi was America's fastest-declining soda, seeing sales slip 9.2%, according to data from Beverage Digest, as reported on by Fortune. That was more than twice the drop for the second-fastest decliner, Diet Coke, which dropped by 4.3%.

The carbonated-soft-drink industry has lost 1.6 billion cases in volume since 2004, according to Fortune, but the news isn't all bad. While sales by volume has fallen, revenue has increased because Coca-Cola, PepsiCo, and other soda brands have smartly marketed higher-priced-per-ounce smaller servings to cater to consumers who are concerned about health but still want soda.

Diet soda may come back

While it's unlikely that the growth of bottled water slows down in the short term, it's not impossible to see Diet Coke and Diet Pepsi making a comeback. For that to happen, Coca-Cola and PepsiCo will have to find a way to make their product better for people.

That's a difficult, but not impossible, challenge in a nation where people have swapped smoking for vaping -- essentially trading one unhealthy habit for another that seems like it's a little better for you. Americans probably still want to drink soda; they just need a reason to feel better about doing so.

10 stocks we like better than Coca-Cola
When investing geniuses David and Tom Gardner have a stock tip, it can pay to listen. After all, the newsletter they have run for over a decade, Motley Fool Stock Advisor, has tripled the market.*

David and Tom just revealed what they believe are the 10 best stocks for investors to buy right now... and Coca-Cola wasn't one of them! That's right -- they think these 10 stocks are even better buys.

More from The Motley Fool:
6 Things You Didn't Know About Coca-Cola
How Far Could LaCroix Drive National Beverage?
3 of the Cheapest Gold and Silver Stocks on the Planet