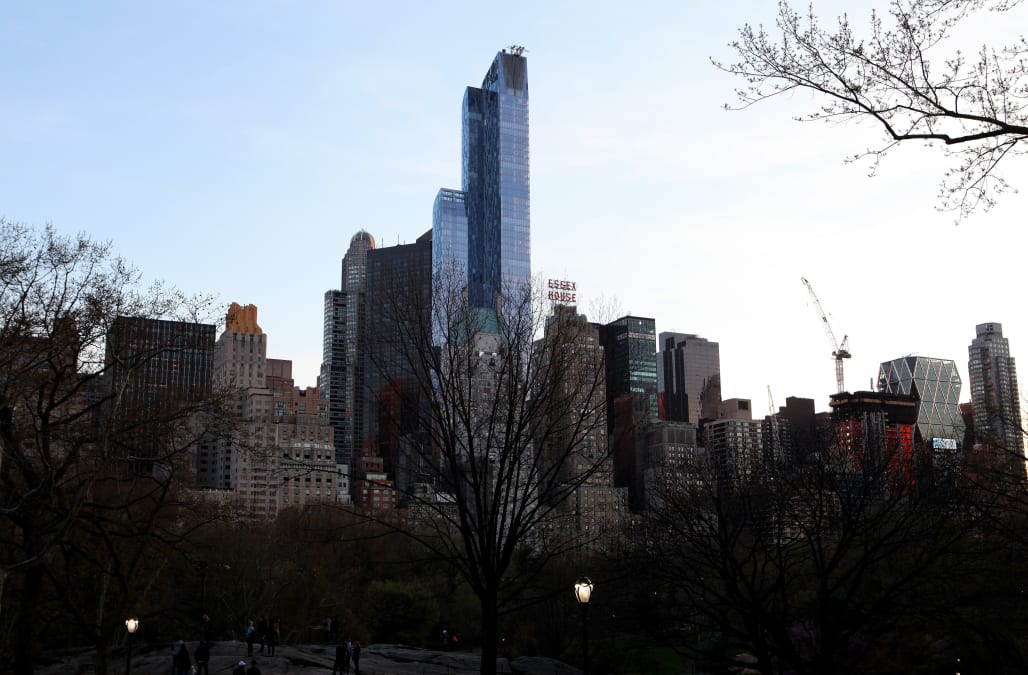 A full-floor penthouse in the landmark One57 condo building is headed to the auction block after it was seized under foreclosure, Bloomberg reported.

This is most likely the largest foreclosure in the history of high-end real estate in New York City, experts say.

"I don't know of a foreclosure that's larger than that," Donna Olshan, president of Olshan Realty, told Bloomberg.

The apartment, which was the eighth-priciest sold in the building, will go to auction on July 19.

It was purchased for $50.9 million in 2014, with a $35.3 million mortgage loan from Banque Havilland. It was due to be paid in full a year after purchase, but no such payment was made by the shell company the unit was registered under. Havilland is now forcing the auction to recoup the funds it's missing, plus interest, according to court filings.

One57 is emblematic of New York City's Billionaire's Row, a stretch of 57th Street near Central Park, which in recent years has become a magnet for new condos courting high-priced investment. One57 is considered the most expensive of the new buildings, with record-breaking sales that included a $100.5 million top-floor penthouse.

Bloomberg has bought five of the six apartment units in the building next to his 7,500-square-foot townhouse over the last two decades. After connecting the floors in 2009, he grew his home to 12,500 square feet, according to The New York Post. The buildings are within steps of Central Park.

A $19.75 million pair of townhouses is currently on the market.

The Missionary Sisters of the Immaculate Heart of Mary, an NYC-based convent of nuns, acquired the townhome on the right in 1948. Four years later, the group bought the one next door and connected them via a doorway on each floor.

Throughout the years, the order has rented some of the complex's 25 bedrooms to other congregations or young women in need. But the Frankenmansion may soon find a new owner — the 15,600-square-foot space went on the market for $19.75 million in 2016, according to the New York Times.

Sarah Jessica Parker lives in a pair of twin townhouses worth $34.5 million.

The star of Sex and the City snatched the two brick townhouses above from the nonprofit United Methodist Women, then fused them together. The organization listed the pair of buildings (which were not connected) for $44 million in 2016, but Parker paid $34.5 million, according to The Real Deal.

Once a factory and showroom, this set of buildings will soon be one Frankenmansion.

Billionaire Jon Stryker is the rumored owner of the three brick buildings above, which NYC-based architecture firm Steven Harris Architects is working to turn into one residence. Curbed reported that Styker was probably the buyer of the $32 million set in 2012. The renovation project is still undergoing an approval process from the city.

In their former lives, the buildings were an ice cream factory, a Steinway piano showroom, and a garage. If the plans go through, the property's facade will stretch 41 feet from end to end.

Roman Abramovich is working to connect a trio of townhouses worth $78 million.

In late 2016, Russian billionaire Roman Abramovich got approval to connect three townhouses on the Upper East Side, according to 6sqft. He purchased the buildings in 2015 for a reported $78 million.

The facades will be preserved, and the center house will become the mansion's main entrance after construction is complete. The interiors will be completely renovated, and the backyard will feature a private garden.

A pair of limestone townhouses is listed for $75 million.

Owned by the billionaire Safra family, the two limestone townhouses above were listed for sale in 2015 as a trio with the building on the far right. The asking price was $120 million, but the owners are now asking $75 million for just the pair, which will likely be combined by its future owner, according to Curbed.

A total of 25,641 square feet, the soon-to-be Frankenmansion would feature 18 bedrooms.

Feinstein bought the townhome on the left for $3 million in 2004, according to The New York Times. A year later, the one next door went up for sale for $3.825 million, and Feinstein purchased, gutted, and renovated it to connect the two.

The finished product features 18 rooms, twin staircases, seven bathrooms, two bathrooms, eight fireplaces, a 25-foot-wide backyard, and two pagodas, which serve as outdoor living and dining areas. He put the mansion on the market for $17.9 million in 2013, but later decided to keep it.

In 2009, Madonna bought three connected townhouses on Manhattan's Upper East Side. The $32 million mansion features 13 bedrooms, a dance studio, multiple dining rooms, a 3,000-square-foot garden, two garages, an elevator, and a private gym, according to Curbed.

This is the second apartment in the building to face foreclosure in the last two months. A unit on the 56th floor, which sold for $21.4 million in July 2015, hit the auction block on June 14. It's unclear if the property has changed hands yet.

The foreclosures come as another sign that Billionaire's Row is dead as the Manhattan real estate market above $10 million continues to cool.

A glut of units available with no buyers, combined withan increase of scrutiny on shadowy, identity-hiding corporations by the US Treasury Department, cooled the market considerably last year. With new regulations on capital outflow abroad (especially in China), it's becoming harder for foreign investors to use these apartments as investment properties. Pair that with an uncertain global market, and it's clear why the developers of these unique buildings are feeling the pinch.

On Billionaire's Row, "it's not just slow — it's come to a complete halt," Dolly Lenz, a real-estate broker catering to super-rich individuals, told the New York Times last year.

NOW WATCH: Learning to celebrate failure at a young age led to this billionaire's success

SEE ALSO: The Obamas just shelled out $8.1 million for the DC mansion they've been renting since leaving the White House