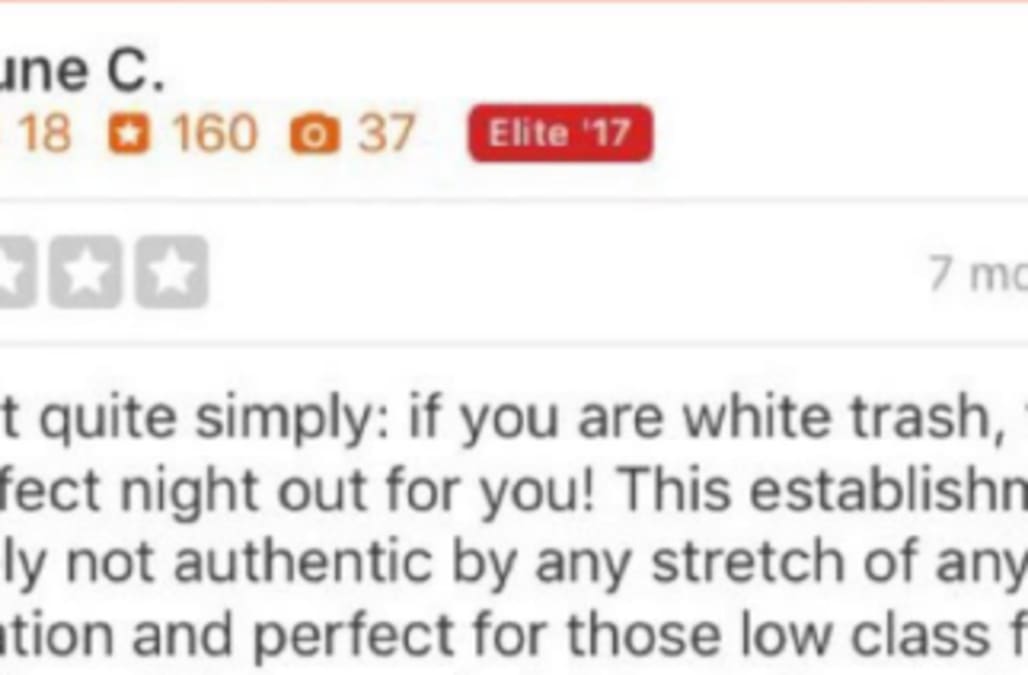 June Y. Chu, the Dean of Pierson College, one of Yale's residential colleges, was placed on leave a month ago after her rude and inappropriate Yelp reviews came to light. Yale announced that she has permanently left the position. Chu officially resigned, but this resignation undoubtedly wouldn't have happened had she not written the offensive Yelp Reviews.

Chu's problems began when the Yale News published screenshots of her Yelp reviews. Chu wrote, among other things, these things:

After these reviews came to light, Chu apologized saying, "My remarks were wrong.There are no two ways about it. Not only were they insensitive in matters related to class and race; they demean the values to which I hold myself and which I offer as a member of this community."

What about free speech?

Yale is a private institution, and the first amendment applies to governments--federal, state and local. So, a state university would be a different situation than Yale. You don't have the right to free speech at work. There are some things that are protected, such as discussing working conditions, but Chu wasn't doing that.

Additionally, as the dean of a residential college, Chu needed to set an example for students. Yale certainly doesn't want students to think their leaders think of them as "white trash." Amy X. Wang, writing at Quartz, wrote: "Given that Chu has a Ph.D. in social psychology, she perhaps should have seen the backlash coming." Wang is right--this indicates that Chu couldn't see the consequences of her statements, which she should have seen coming. Remember, even if you don't write under your full name, everything you put on the internet can be traced back to you if someone cares enough.

Do you have to always be nice on social media?

INC. TODAY'S MUST READS: Want to Be a Lot Happier? Never Do Any of These 9 Things

Of course, you should be. This doesn't mean you have to agree or like everything, but you just need to be nice. While your bosses certainly shouldn't set out to monitor your social media accounts, if things like this come to light, you should be concerned for your job. Racial discrimination is illegal in employment, and your boss can reasonably assume that if you are using prejudiced and discriminatory language on the internet, you'll be inclined to use that at work.

Sometimes rudeness is protected speech. Employment Attorney Jon Hyman detailed a case where an employee won a claim after his employer fired him for posting "Bob is such a [redacted] don't know how to talk to people!!!!! [Redacted] his mother and his entire [redacted] family!!!! what a LOSER!!!!"The difference is, Hyman explains, was that Bob was his boss.

Unfortunately for this employer: 1) the company was facing a union election two days later; 2) this employee supported the union; and 3) he ended his post, "Vote YES for the UNION!!!!!!!"

Because Chu's posts were not in any way, shape or form a discussion of her working conditions, and weren't directed towards any of her co-workers, this is not protected speech when she works for a non-governmental organization.

INC. TODAY'S MUST READS: Why Do People Quit Their Jobs, Exactly? Here's the Entire Reason, Summed Up in 1 Sentence

Should you fire employees for their social media posts?

Mostly, you should actively avoid your employee's social media accounts, but when something comes to your attention, you need to decide how to proceed. Does this reflect poorly on your business? Is it likely to be public? How bad and offensive was it? Is it covered as protected speech because it's related to working conditions? When in doubt, consult your own employment attorney. It's always better to spend the money to ask your lawyer before you act than it is to have to pay your attorney to fight a lawsuit.

What can you do to avoid making the same mistake?

My Inc. colleague, Justin Bariso, gave some practical tips on how to make sure you don't fall into the same trap as Chu. Check out his tips.

RELATED: 13 signs you're about to be fired

13 PHOTOS
13 signs you're about to be fired
See Gallery

1. Your instincts are telling you something's wrong

"If you feel you've done everything you can, but still have that 'I might get fired' feeling, you're probably right, and it's likely time to move on," Andy Bailey of business coaching service Petra Coach says. "You may be an 'A' player, but it might have to be somewhere else. Begin seeking out other positions that better reflect your personality and work ethic."

Ketti Salemme of TINYPulse, an employee survey product, says that it's important not to disregard your own instincts.

"Sometimes the sign can be nothing more than a gut feeling," Salemme says. "Whether it be a shift in the company culture, your job duties, or your relationship with colleagues, this can be indicative enough that you may soon be let go."

Leah Machado, a director at Paychex, Inc. — a payroll and HR outsourcing company — says that a number of different factors typically snowball into a firing.

Here's one obvious sign: Your boss tells you that you haven't been doing stellar work.

"Any sign that you're not meeting performance expectations — verbal, written, or otherwise — should be an indicator that you need to change your actions, behaviors, and results, as well as develop the competencies and skills to combat those identified shortcomings," Machado says.

Lynn Taylor, a workplace expert and the author of "Tame Your Terrible Office Tyrant: How to Manage Childish Boss Behavior and Thrive in Your Job," notes that formal warnings are never good news.

If you've received one, know that more bad news may be coming your way.

3. Communication has broken down

"For a manager, there's nothing worse than being asked to jump in on something in the eleventh hour when an employee has been saying 'I got this' for weeks," Duggan says. "Clue them in right away."

People used to listen up when you gave your perspective on the topic at hand. Now, you get the feeling that you're not being heard.

TopResume career expert Amanda Augustine says that not being included in important discussions is a red flag.

"Not being invited to one meeting isn't cause for concern," Augustine says. "However, if you're repeatedly left off email threads or meeting invites, you have cause for alarm. This might be a sign that you're being phased out."

5. Your job has become impossible

If you feel like your job has become overwhelming all of a sudden, you might have a terrible manager — or the organization may be intentionally trying to shed you, according to Mike Kerr, an international business speaker and author of "The Humor Advantage."

"You're being set up to fail," Kerr says. "Sometimes this is due to lousy leadership, but occasionally it can be because a company wants to get rid of you, but they need solid evidence to do so, and setting you up for disaster is one way of getting the 'proof' you longer belong there."

6. Your relationship with your boss has deteriorated

Some managers have a less warm and friendly style, but you should definitely be concerned if things have gotten tense all of a sudden.

"These days, your manager sees you filling that coffee cup and basically leaves the zone with only a brief nod and minimal eye contact. Feeling the ice every time you see your superior?" says Nora Heer, cofounder of Loopline Systems — a company that deals with HR solutions. "This could be a sign you're about to be let go. Even the most professional and socially capable people tend to avoid situations that are uncomfortable — and firing someone is never easy."

7. Your license to spend has been revoked

Robert Dilenschneider, author of "50 Plus!: Critical Career Decisions for the Rest of Your Life," notes that any reduction in spending authority is a bad sign.

"Increased scrutiny is a phenomenon that is rarely initiated by the accounting department," Dilenschneide says. "The boss believes that you have wasted time or inflated expenses. Even if you are 100% innocent, it doesn't matter. Find out if you are the only person being scrutinized."

8. You have less work to do

This one's a pretty major warning sign. The fact is, your manager doesn't want a ton of loose ends to deal with after you're gone.

Heer says that a sudden reduction in workload is an especially dire sign if your requests for more work go unanswered.

"Asking for more work, but hearing crickets in response?" Heer says. "This might be a sign your exit is coming."

Meanwhile, Bruce Tulgan, the founder of RainmakerThinking and author of "It's Okay to Manage Your Boss," told Business Insider that employees shouldn't panic if business is just slow.

Steve Hunt of SAP SuccessFactors, which provides cloud solutions for HR, says that a change in leadership is especially risky for one certain type of worker — executives.

"When CEOs and other high level executives are brought into an organization from the outside they are often hired to change things," Hunt says. "So if you are on an executive team and your boss was just replaced by someone new from outside the company, then you may want to be prepared to be let go."

Digital marketing firm YouthNoise's Ajay Paghda notes that if you're worried about getting fired, you should keep an eye out for potential replacements. If your supervisors start cross-training you with a subordinate, that might be a bad sign.

"This might be a sign that management is considering letting you go. They want the new employee to learn as much from you before they show you the door," Paghdal says.

11. There's recently been a merger

After a merger, it's not uncommon for a company to make layoffs.

Salemme adds that employees should especially watch their backs during mergers. As redundant employees are rooted out, you might find yourself fired through no fault of your own.

"Sometimes it doesn't come down to anything more than profitability and the acquiring company's trust in its people," Salemme told Business Insider.

12. You notice more gossip and strange behavior from your coworkers or boss

"Your colleagues are avoiding you. The chatter around the water cooler goes quiet when you walk by," Augustine says. "Your coworkers stop inviting you to lunch."

Do your coworkers seem to scurry away anytime you get close? That may be a subtle hint that something's up (or maybe they just hate you).

It's important to fit into the company's culture. That means taking one for the team, sometimes, as HR consultant Laurie Ruettimann told Reader's Digest: "If we ask you to travel for your job or attend a conference, it’s not really a question. Say no, and it can be career-ending."

Jacquelyn Smith contributed to a previous version of this article.

More on Inc.com:
Should You Declare July 3rd an Additional Holiday This Year?
When Helicopter Parents Crash the Workplace
The 50 Most Annoying Office Jargon Phrases