Smashburger will soon let you pay with your iPhone 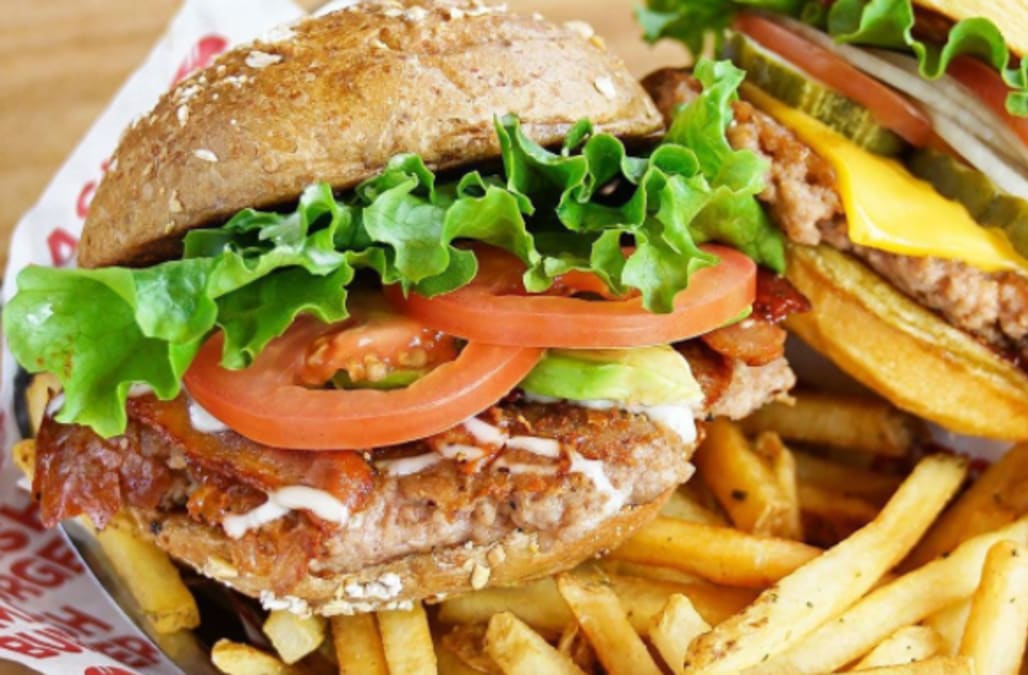 Apple is slowly but surely growing the list of places where you can pay hands-free with your iPhone and Apple Pay.

The latest addition: Smashburger, which announced that it will begin accepting Apple Pay later this year.

SEE ALSO: This could be our first look at the iPhone 8's glorious edge-to-edge screen

Once it's live in store, you'll be able to tap-to-pay just as you would at any other business or retailer that takes Apple. Additionally, Apple Pay will also be integrated with Smashburger's loyalty program.

Once you've paid, your phone will prompt you to join the restaurant's loyalty program, which lets you earn discounts and credit toward future orders. Apple's Wallet app will keep tabs on your points as part of the loyalty program.

The entire integration is coming thanks to a partnership with marketing company Punchh, which powers restaurants' in-store loyalty programs. Sandwich chain Quiznos and Mod Pizza will also be accepting Apple Pay later this year, thanks to Punchh.

Surprisingly, even though Apple Pay has been out for a few years now, the list of national restaurant chains that support it is relatively short. That may be because it's taken restaurants longer to adopt the NFC technology necessary for Apple Pay than retailers, or simply because there hasn't been much incentive for them to do so until now.

But by adding loyalty programs into the mix, which can have a big impact on an establishment's ability to draw in new customers, we might finally start to see more casual chains follow suit.

RELATED: Best burgers in every state

Best burgers in every state

OK, the original van has retired and this shop is more of a lunch stand, but it still serves some of the tastiest no-frills burgers ever, slathered with mayo, ketchup, mustard and cheese.

Shhh, the secret to the deliciousness is the Cajun seasoning added to each patty before it’s cooked.

As guilt-free as a big, sloppy burger gets: It’s made from 100 percent local, range-raised, antibiotic-free and hormone-free beef from the sustainability-thinking Diablo Trust ranches.

The secret to this juicy burger that doesn't skimp on toppings is that they grind their beef on site every day. The retro '50s décor isn't too shabby, either.

This heavenly creation made with dry-aged beef, arugula, Gruyère cheese and a bacon-onion compote is like eating French onion soup in burger form. Word to the wise: Do not ask for ketchup here; they’ll laugh you away.

You’re the boss at this build-your-own-burger joint--you could even top your patty with grilled pineapple and peanut butter. (But, um, we wouldn’t recommend it.)

We’re obsessed with the amazing burgers at Plan B Burger Bar, but we’ve gotta give a shout-out to Louis’ Lunch, the first-ever restaurant to serve hamburgers in the U.S. (They’re still super old-school, so if you want ketchup or mustard, you’re out of luck.)

How amazing are these diner-style burgers? Just ask Obama.

Locations in North Wilmington and Prices Corner; 302-998-8853 or charcoalpit.net

Ready for the most epic breakfast ever? Sink your teeth into the Big Sloppy, served with double meat, double cheese, double bacon, a hash brown and a fried egg.

RELATED: THE MOST ICONIC RESTAURANT IN EVERY SINGLE U.S. STATE

Live a little and order the Ghetto Burger, a double cheeseburger topped with chili, bacon, grilled onions, ketchup and mustard on a toasted bun. Then take a nap.

Before you hit the beach, grab a Royal B.B.Q. Burger with lettuce, tomato, onions and cheese. (But like your mom always says, eat it at least an hour before you go swimming.)

Breaking news: You can get the Savage Burger with a side of tots. When in Idaho…eat potatoes.

This trendy Chicago diner actually slips a third patty onto the double cheeseburger to achieve optimum cheese-to-meat ratios. Thanks, guys.

Double cheeseburger + onion rings = a match made in burger heaven.

Local farm-raised beef is seasoned with dry farmhouse cider to create this epic plate of deliciousness.

RELATED: THE ONE DISH YOU HAVE TO TRY IN EVERY U.S. STATE

This masterpiece made with house-ground brisket and chuck is, hands down, the best burger in New Orleans, if not the entire state.

These tasty burgers are dished up without lettuce, tomato or mayo but don't fret—there's a reason why this joint has been a local favorite since 1960.

When we’re in Balti, we’re ordering the Bistro Burger, made with Roseda Farm beef and topped with cheddar, bacon and a gooey sunny-side-up egg.

Locations in Baltimore and Ocean City; 443-453-9698 or abbeyburgerbistro.com

Make sure you lift your pinky while eating this burger because it’s fancy, like chuck, brisket and rib lifter fancy.

We’re not saying this burger made the list because it comes with a side of hush puppies, but it certainly doesn’t hurt.

This old-school joint was originally a saloon, but it became a grocery store (that also serves delicious burgers) in 1919. Go for the cheeseburger and jalapeño corn nuggets.

We think we have a crush on the Gateway Burger, with smoked bacon, cheddar, onion rings and homemade barbecue sauce. (Is it weird to have a crush on a burger? Yes? Too bad.)

Come for the elk burger, stay for the crinkle-cut sweet potato fries.

You miiiight want to split the decadent pastrami burger--with five slices of brined meat on an already towering burger with Swiss cheese, mustard and lettuce--with a buddy.

Multiple locations in Rochester; 603-332-1193 or wildwillysburgers.com

OK, you might not want to eat this for breakfast every day, but this ooey-gooey burger with homemade corned beef hash, bacon and fried eggs is a must-try.

The green chile cheeseburger at this low-key spot is so famous, burger fans travel from all over the country to try a bite.

There’s tons of competition for the greatest burger in NYC (we still love you, Minetta Tavern), but even Shake Shack’s head chef Mark Rosati agrees--the Spotted Pig’s chargrilled masterpiece is where it’s at.

This old-school fast-food joint has been serving burgers and fries to locals for the last 70 years--and the prices are so low, you’ll think you’re still in 1946.

Yes, that’s an eggs Benedict burger with a side of tots. No, we’re not sharing.

Founded in 1923, this burger institution is the second-ever fast-food chain in the U.S. (White Castle was the first). Wendy’s founder Dave Thomas ate here as a kid and loved it so much, he decided to go into the burger business. So try a bite of history.

Ever had an Oklahoma Onion Burger? They were popularized during the Great Depression, when beef was combined with onions so restaurants could make more burgers with less meat. Now it’s a tasty local tradition you have to try.

This throwback drive-in has all sorts of classic diner fare, but we’re partial to the 18-ounce burger piled with mayo, lettuce, tomatoes, pickles and onions on a handmade bun.

It’s all about the sliders at this Providence favorite. You’re looking at the M.O.A.B. (short for “Mother of All Burgers,”) with cheese, bacon, mushrooms and fried onion strings.

This charmingly divey spot is home to the Redneck Cheeseburger, drenched in a secret pimento cheese sauce. We could never stay mad at you, cheese…

In addition to the classics, this low-key restaurant features a rotating (and always offbeat) burger of the week--Pork Thai Burger with peanut sauce, anyone?

If a Jalapeño Popper Burger is wrong, then we don’t wanna be right.

Multiple locations in Nashville; 615-915-1943 or burgerrepublic.com

It’s all about perfecting the basics at Chester’s…and then smothering them in chili.

RELATED: THE 5 BEST BURGERS IN DALLAS

Tip: Try to resist ordering the Breath Enhancer on a date. (It’s topped with chunks of garlic.)

We’re not worthy of this cute little grass-fed patty with all the fixin’s! But we will definitely order one.

With half a pound of hand-ground Oregon county chuck and a bun from Seattle’s Dahlia Bakery, the Palace Burger Royale is definitely worthy of its name.

With half a pound of hand-ground Oregon county chuck and a bun from Seattle’s Dahlia Bakery, the Palace Burger Royale is definitely worthy of its name.

Before this chain popped up all over the U.S., it was a tiny family business in nearby Arlington. Keep the Cajun-style fries coming, guys.

RELATED: THE BEST SANDWICH SHOP IN EVERY STATE (OK, AND D.C.)

Hey, don’t knock the Brie and Grilled Pear Burger until you’ve tried it.

No trip to Wisconsin is complete without a butter burger (yep, that’s a burger with a bun drenched in butter), and this Green Bay institution is the spot to get 'em.

Which burger is the best at this Jackson Hole hot spot? With names like Ghetto on a Good Day, Filthy Harry and Polish Lawn-Mower, you really can’t go wrong.

RELATED: THE OLDEST RESTAURANT IN EVERY STATE

More on AOL.com:
There's a chance Walmart will go head-to-head with Amazon to buy Whole Foods
Chick-fil-A is launching a new bun for a group of customers ignored by most fast-food chains
The most popular shopping chain in each state