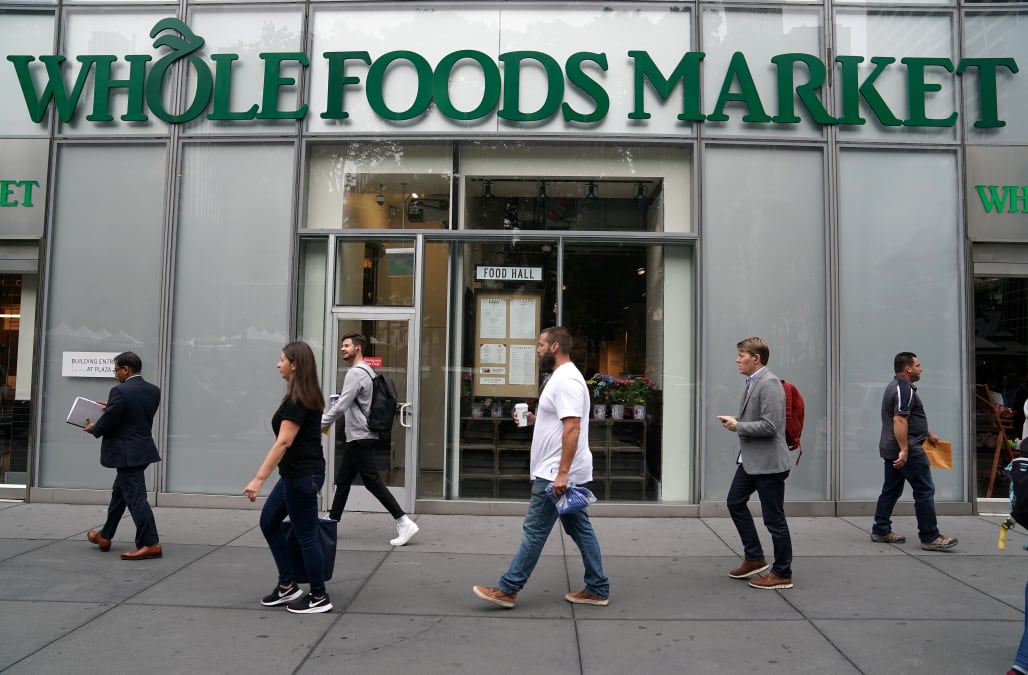 Amazon's deal to acquire Whole Foods merger may seem like a dream come true to some, but there's a realistic chance Walmart could still swoop in to trump Amazon's $13.7 billion offer, according to JPMorgan.

Whole Foods stock has been trading above Amazon's offer of $42 a share, signaling that investors believe a bidding war could emerge and drive up the final price for Whole Foods.

Competitors like Target, Costco, and Kroger have been rumored as potential suitors, and they'd do anything to make this deal harder for Amazon, according to Barclays analyst Karen Short.

Strawberries were expensive across the board.

Three medium-sized bananas weighed around a pound, so this was a close call.

Buying two loaves of bread at Whole Foods would have brought the cost down to a comparable $3 per loaf.

There was a big difference, though the white bread at Whole Foods was organic.

Again, the cheapest option at Whole Foods was organic.

Whole Foods is the winner here and there was a good selection on sale.

Trader Joe's ice cream was cheaper but the 365 version at Whole Foods was organic.

The milk at Trader Joe's is organic.

Both stores stock Almond Breeze almond milk, we did a direct comparison of the product: Trader Joe's was $0.20 cheaper.

Note that Whole Foods' eggs are organic and Trader Joe's are cage free.

According to JPMorgan, Walmart is the only retailer with a legitimate shot of entering the fray.

"From our perspective, we have a hard time seeing Kroger, Costco, or Target coming in over the top. We do think there is a chance that Walmart makes a bid. There are compelling reasons for it to do so (adding new, generally wealthier customers; acquiring a strong brand; generating synergies and efficiencies; et al), in addition to keeping Amazon out of its wheelhouse."

Walmart is the only company with the financial might to play ball with Amazon. The current offer for Whole Foods comprises only 3% of Amazon's market cap and only 6% of Walmart's. It would match 64% of Kroger's. Walmart also has plenty of incentives to make a move for Whole Foods, according to JPMorgan. Among them:

That's not to say that a Walmart bid would be a slam dunk. While JPMorgan thinks Walmart is the only competitor in the group "with the means and motive to counterbid," doing so would have serious downsides.

For starters, it puts Walmart in a defensive position rather than offensive: It already owns a colossal network of brick and mortar grocery stores; what it really needs to improve is its online platform.

"Given Walmart's 20%+ share in grocery, why should the company spend $14B+ on what it's already good at (selling food via brick-and-mortar) when the money instead could be used to expand and improve Jet.com and Walmart.com? Jet.com is Walmart's urban/millennial alternative to Amazon Prime, and Walmart.com is in many ways the 'forgotten man's' alternative to Prime."

It would also be very difficult to overcome the culture clash. For instance, Whole Foods CEO John Mackey has focused intently on employee welfare — even to the detriment of shareholders, he acknowledges — while Walmart is notoriously stingy on benefits and has reputation for paying minimum wage, JPMorgan notes.

When Walmart spent $310 million last Friday to acquire Bonobos — a high-end brand like Whole Foods — fans of the hip fashion brand were furious, saying it was "no longer cool." It's hard to imagine Whole Foods loyalists would be more subdued.

"As cultural similarity is often a key determinant of a successful merger, we think WMT and WFM have conclusively different guiding principles for the two entities to combine and thrive," JPMorgan wrote in the note.

Walmart is probably the only company out there with the financial firepower and the motive to compete with Amazon for Whole Foods. But it wouldn't be easy, and Amazon, with a cash war chest nearly $20 billion larger than Walmart's, will have the right to match or beat any offer that comes in.

NOW WATCH: JIM ROGERS: The worst crash in our lifetime is coming