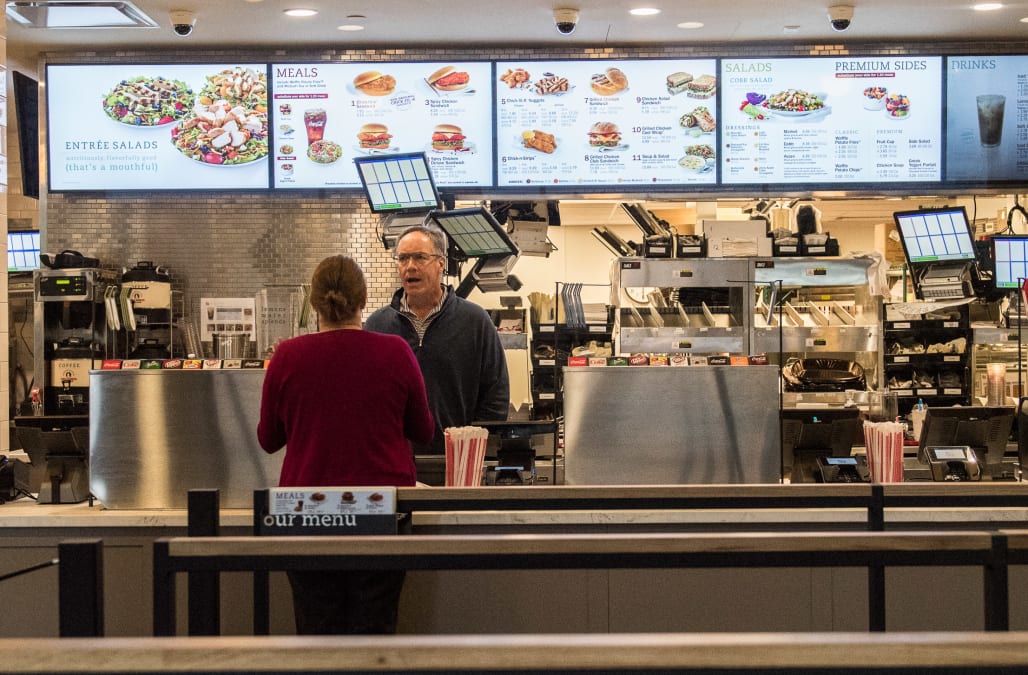 When I first heard Chick-fil-A was launching a gluten-free bun, I was thrilled.

Gluten-free eaters like me are largely ignored by fast food chains, so when Chick-fil-A started serving its new buns on Monday, I had to get my hands on one.

The bun,made with quinoa and amaranth and sweetened with molasses and raisins, contains 150 calories and costs an additional $1.15.

It seemed like a small price to pay to finally be able to try a chicken sandwich from one of the most popular chains in the US.

We went to Chick-fil-A to test out the new bun. Here's what happened:

Take a look at the new Chick Fil A burger

I visited Chick-fil-A's 6th Avenue location in New York on the first day that the gluten-free bun was rolled out nationwide. This is one of its three locations in Manhattan.

When I arrived, there was a long line that stretched outside the door, which is common for this location. The new bun hadn't been added to physical menus yet and there was some confusion about whether or not it was available.

As this was supposedly the first day the gluten-free bun was available in stores, I persisted and asked the manager of the store if it did indeed exist.

The workers couldn't have been more accommodating. Next thing I know, I was being ushered to the front of the line and ordered a gluten-free meal directly from the manager.

This treatment was in-keeping with the chicken chain's stellar reputation for polite customer service. According to QSR Magazine's annual drive-thru report released in October, Chick-fil-A is statistically the most polite chain in the restaurant business.

According to the report, Chick-fil-A employees said "thank you" in 95.2% of drive-thru encounters, based on data from nearly 2,000 visits to 15 restaurant chains.

I ordered a grilled chicken sandwich on a gluten-free bun with a side of superfood salad, which is made with broccolini and kale. The total cost was $11.46, including tax. The sandwich alone would cost $6.94, before tax.

I rushed back to the office to try the meal. My first impression was it looked pretty good.

One of the biggest problems with gluten-free bread is that it often crumbles easily because it lacks the gluten proteins that hold the bread together. This was definitely the case with the Chick-fil-A bun. As soon as I took a bite of the sandwich, it fell apart.

Luckily the superfood salad saved the day — it was little sweet thanks to its maple dressing but wasn't overdressed and felt light and healthy.

Overall, I was very disappointed by Chick-fil-A's new gluten-free bun, especially after trying Shake Shack's version. The Shake Shack bun, which I ordered a breakfast sandwich on earlier in the week, wasn't sweet and it held together well. It showed that is in fact possible to make gluten-free bread taste good.

More from Business Insider:
McDonald's is taking its biggest risk in history
Thousands of Americans are going to church in dead malls
Chick-fil-A is launching a new bun for a group of customers ignored by most fast-food chains

SEE ALSO: Chick-fil-A is launching a new bun for a group of customers ignored by most fast-food chains