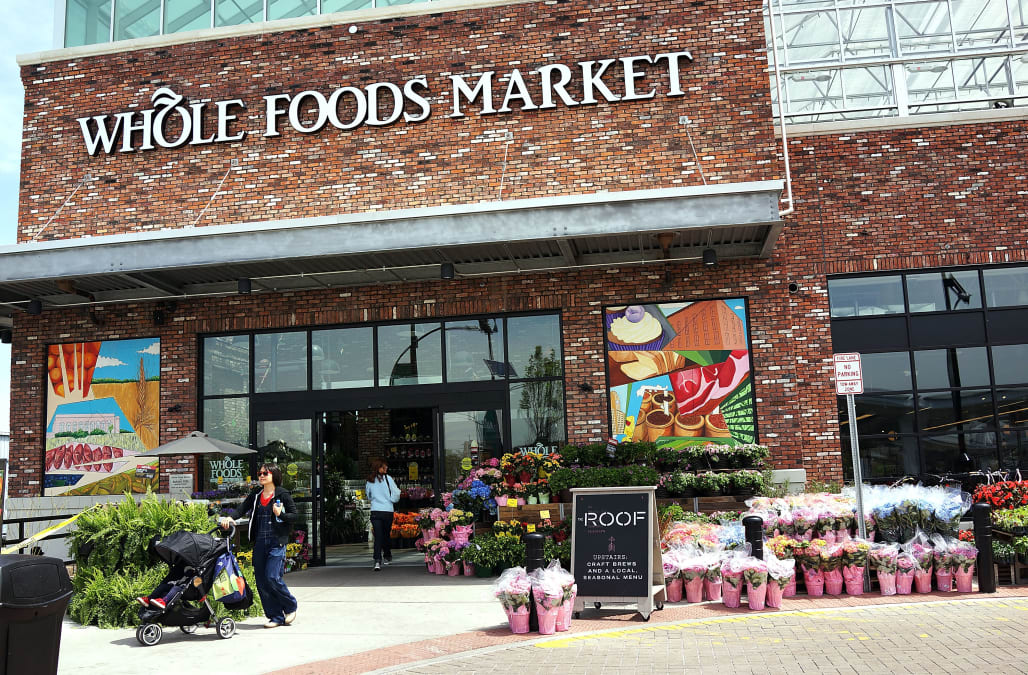 Amazon's (NASDAQ: AMZN)purchase of Whole Foods (NASDAQ: WFM) started the way so many marriages do. "How did we meet?" said John Mackey, CEO and founder of the grocery chain. "It was actually mutual friends who set us up on a blind date. [Whole Foods executives] Jason Buechel and Ken Meyer and David Lannon and I flew up to Seattle a little over six weeks ago. And I, we just fell in love. It was truly love at first sight," Mackey said on Friday, according to a transcript.

The Whole Foods CEO, who will keep his position after the deal closes, made those remarks in a "town hall" meeting with employees where he tried to share his enthusiasm for the deal and assuage employee fears. He explained that things came together quickly, with the agreement being announced less than six weeks after the first casual discussion. Mackey tried to make it clear that this is not a marriage of convenience, but a logical long-term opportunity for his company.

"This is not a Tinder relationship," he said, according to a transcript of the meeting filed with the SEC. "I am, like, super excited. And so I also wanna reassure you that we're keeping our corporate headquarters here in Austin. We're not gonna be moving out to Seattle."

RELATED: Get them while you still can! Here are the best things to buy at Whole Foods

Mackey said the sale of the company will bring changes and opportunities. He repeatedly referred to plans he could not talk about until the deal closes, but he did share some specifics.

"I can't say there's not gonna ever be any changes," he said. "Because you already know we're evolving. We are, we've sent out, publicly, we're doing category management... We're gonna take $300 million out of our cost structure."

To help make that happen, Whole Foods has hired Boston Consulting Group to analyze how it spends money. The goal of that project, according to Mackey, is helping the company lower its costs while also improving its service to customers.

"We do think our partnership with Amazon is gonna help us do that more skillfully and, hopefully, faster," he added.

Public companies often struggle with balancing a need to hit quarterly numbers with building for longer-term success. That's something Amazon has seemingly not been bothered by, with the company being willing to have a "bad" quarter or even a few if it was in the best interest of the company's long-term thinking.

"They have had the courage that almost no other public company has had the courage to, basically, resist the drumbeat of short-term, quarterly earnings that have had us trapped here for a couple of years, as our same-store sales came down," Mackey said.

Mackey made it very clear that he believes Amazon's ability to innovate can help Whole Foods do much more than keep costs down. He also tried to reassure his employees that saving money would not mean compromising what the brand has represented since its launch.

"Whole Foods Market's quality standards are not gonna change," he said. "We've got a lot invested in our brand. And these guys are really smart people. They're not stupid enough to go change that." He also said the two companies could create formats not labelled with the Whole Foods name.

Strawberries were expensive across the board.

Three medium-sized bananas weighed around a pound, so this was a close call.

Buying two loaves of bread at Whole Foods would have brought the cost down to a comparable $3 per loaf.

There was a big difference, though the white bread at Whole Foods was organic.

Again, the cheapest option at Whole Foods was organic.

Whole Foods is the winner here and there was a good selection on sale.

Trader Joe's ice cream was cheaper but the 365 version at Whole Foods was organic.

The milk at Trader Joe's is organic.

Both stores stock Almond Breeze almond milk, we did a direct comparison of the product: Trader Joe's was $0.20 cheaper.

Note that Whole Foods' eggs are organic and Trader Joe's are cage free.

Mackey said he did not know if Amazon had plans to install someone on his executive leadership team, but he sees a merging of talent.

Most marriages begin hopefully. That early optimism, however, eventually gets replaced by reality. Every relationship has problems and it's how you handle those that determine whether things work out in the long term.

Amazon and Whole Foods appear to be a good match and Mackey seems to be going into the deal understanding that it means change for him as well as his brand. That seems to give the deal a better chance for success than most.

10 stocks we like better than Whole Foods Market
When investing geniuses David and Tom Gardner have a stock tip, it can pay to listen. After all, the newsletter they have run for over a decade, Motley Fool Stock Advisor, has tripled the market.*

David and Tom just revealed what they believe are the 10 best stocks for investors to buy right now... and Whole Foods Market wasn't one of them! That's right -- they think these 10 stocks are even better buys.