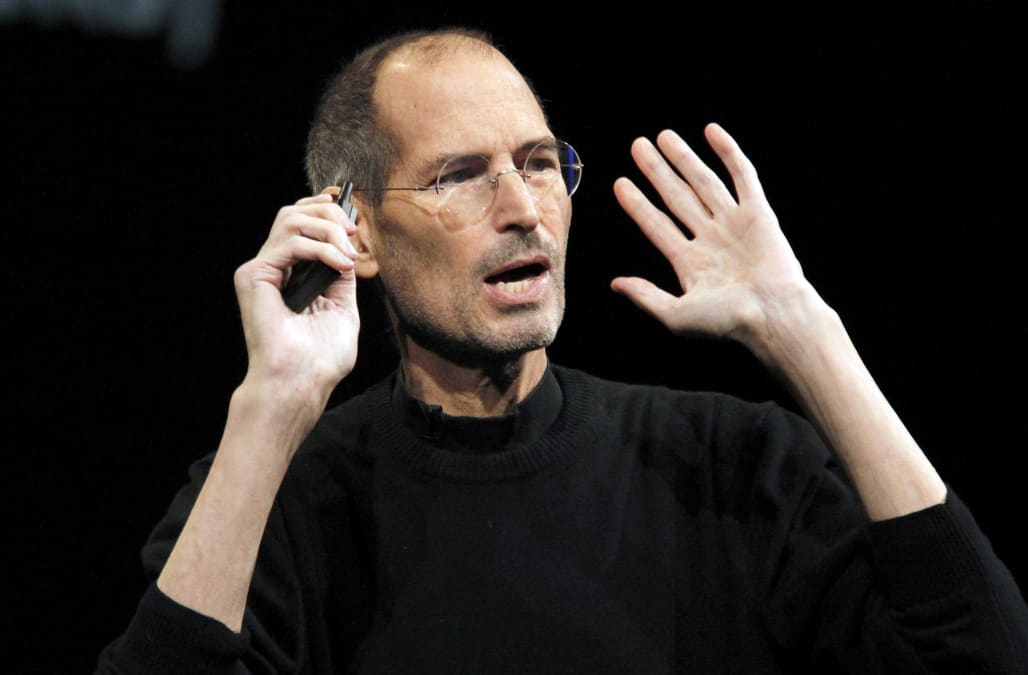 While at Apple, Scott Forstall was in charge of developing the software that runs on iPhones, and he was a close friend of late CEO Steve Jobs.

Jobs has a famously deserved reputation as a difficult person to work with, but during an on-stage talk at the Computer History Museum on Tuesday, Forstall said Jobs also had a great sense of humor.

Apple is well-known in Silicon Valley for making its employees pay for coffee and food from its cafeterias, in contrast to companies like Google that provide meals for free.

In late 1996, Apple announced plans to bring cofounder Steve Jobs back into the fold 11 years after he left the company by acquiring his startup NeXT for $429 million — just in time for Jobs to join then-Apple CEO Gil Amelio on stage at January 1997's Macworld Expo, a convention for Mac enthusiasts, as a keynote speaker.

Steve Jobs' NeXT found its niche selling graphically intensive PCs with cutting-edge screens to universities and banks. Apple hoped that Jobs would revitalize the Mac maker, whose stock had hit a 12-year low under Amelio's leadership and experienced crippling losses.

On July 4, 1997, Jobs persuaded Apple's board to oust Amelio and make Jobs the interim, and then permanent, CEO. In August 1997, Jobs took the stage at another Macworld Expo to announce that Apple had taken a $150 million investment from its long-time rivals at Microsoft. "We need all the help we can get," Jobs said, to boos from the audience.

In fact, by 1997, Apple's financial situation was so dire that Dell CEO and founder Michael Dell, one of Microsoft's biggest partners, once said that if he were in Jobs' shoes, he'd "shut it down and give the money back to the shareholders."

But in early 1998, at yet another Macworld Expo in San Francisco, Jobs ended his keynote with the first of his soon-to-be ubiquitous "One More Thing" announcements: Thanks to Jobs' product direction and Microsoft's help, Apple was finally profitable again.

Jobs needed the help. At this point, Jobs was CEO of both Apple and Pixar Studios, of which he had become chief investor in 1986 after funding it with $10 million. Jobs is actually credited as an executive producer on 1995's "Toy Story."

Behind the scenes, Jobs was making some big changes for Apple employees, too: Under Jobs, the Apple cafeteria got much better food, and employees were barred from bringing their pets to the campus. He wanted everybody focused on Apple.

Almost exactly a year after that Microsoft cash came in, in August 1998, Apple would release the iMac, an all-in-one, high-performance computer codesigned by Jobs and new talent Jonathan Ive.

The iMac came in multiple colors, the first time the world would get a taste of Ive's computer design sensibilities. This first iMac was a much-needed hit, selling 800,000 units in its first five months.

Jobs had originally pitched the name "MacMan" for this new Mac. It was Ken Segall, an executive with Apple's ad agency at the time, who suggested "iMac." The "i" is for "internet," since it took only two steps to connect to the web, in case you were wondering. But Apple has also said it stands for "individuality" and "innovation."

The naming scheme would stick around. In 1999, Apple introduced the "iBook," a funky machine that tried to replicate the iMac's success as an entry-level laptop.

But Apple's next really dramatic move would come in 2001, when Mac OS X was released. Where Apple had been treading water with Mac OS 8 and 9, OS X was a drastic redesign, based largely on the Unix and BSD technology at the core of Jobs' NeXT Computers.

From here, things started moving fast and furious for Apple. Later in 2001 Apple would open its first retail stores, in Virginia and California.

In October, Jobs' Apple would take its first steps beyond the Mac with the iPod, a digital music player that promised "1,000 songs in your pocket." The iPod actually got off to a slow start, largely because it started at a pricey $399 and worked only on Macs.

In 2003, Apple opened up the iTunes Music Store, with its novel pricing model of $0.99 per song, to turn the iPod into the center of a digital media universe. Around the same time, both iTunes and the iPod hit Windows, jump-starting Apple's music play.

But in 2003 Jobs received some news that would cast a shadow over the good times at Apple: He had pancreatic cancer. He kept it a secret until sharing the news with employees in 2004.

In just six years, Apple had gone from a laughing stock in tech to a serious player. And from 2003 to 2006, it went from around $6 per share to about $80 per share. Apple was still lagging behind Microsoft in marketshare, but it was making serious money. Celebrities like U2 and John Mayer were tapped to help out at company events.

Over the years, Jobs' Apple had been asked to extend its design expertise to creating a new touch-screen device. In 2004, Jobs convened Project Purple, under his supervision with Ive in charge, to develop a touch-screen device. Originally, Jobs was envisioning a tablet, but it eventually turned into a concept for a cell phone.

The iPod lineup slowly grew, too. By 2005, there was the iPod, the iPod Mini, the iPad Nano, and the iPod Shuffle, in descending size order. That same year also saw the introduction of the first iPod with video, alongside the ability to buy movies and videos on iTunes.

In 2005, Motorola introduced the ROKR, a phone that it made in partnership with Apple. It was the first phone that could play music from the iTunes Music Store. But it was limited to being able to store only 100 songs because of a limit in its software.

In 2006, Jobs made a big move that probably saved the Mac. Former CEO John Sculley had banked Apple's future on the pricey PowerPC processor, while the major Windows PC manufacturers stuck with Intel. It meant Macs were both more expensive to buy and harder to develop software for. But in 2006, Apple introduced the first MacBook Pro alongside a new iMac, both of which came with Intel processors.

It also meant that for the first time you could install Windows on a Mac.

Apple was on the upswing. In 2006, the flagship Apple Store opened in Midtown Manhattan. Its unique glass-cube structure makes it a modern New York City landmark.

But at this point, Jobs' health was starting to fade, and observers started to take notice. Note how thin Jobs looks here, shaking hands with Disney CEO Bob Iger at a 2006 Apple event.

Still, 2006 also marked a personal victory for Jobs. He got to send this email to every Apple employee: "Team, it turned out that Michael Dell wasn't perfect at predicting the future. Based on today's stock market close, Apple is worth more than Dell. Stocks go up and down, and things may be different tomorrow, but I thought it was worth a moment of reflection today. Steve."

After years of speculation, Jobs would officially unveil the iPhone at January 2007's Macworld Expo. It combined the music features of the iPod with a slick, responsive touch screen that didn't need a stylus, unlike most mobile devices at the time. And the iPhone's Safari was the first full-featured web browser on a phone.

An excited media dubbed it the "Jesus Phone." Excited fans camped out in front of Apple Stores nationwide.

The iPhone was a massive hit, taking only 74 days from its August 2007 launch to sell a million units.

In 2008, Apple released the first big iPhone update: the iPhone 3GS. It had faster network speeds, sure, but the biggest change was that it came with this thing called an App Store to let you install software from non-Apple developers. At launch, the App Store had 500 applications.

Famed venture investor John Doerr of Kleiner, Perkins, Caufield & Byers took the stage to announce a $100 million iFund for app developers. It was the start of the app economy, and Apple was leaving Microsoft in the dust.

Still, Jobs' health continued to loom over Apple. In August 2008, Bloomberg accidentally published a 2,500 word obituary of Jobs. At a September 2008 keynote, Jobs poked fun at the idea.

In 2009, Tim Cook was tapped as interim CEO while Jobs took the first of three extended medical leaves. Even on Jobs' return, Cook became a regular at Apple keynotes. When Jobs returned, his prognosis was listed as "excellent."

In 2010, Jobs finally introduced the Apple iPad, the tablet he had been wanting since the early 2000s.

The iPhone and the iPad accidentally started an internet standards war. Jobs thought Adobe's Flash, then the de facto standard for interactive web content, was slow and insecure. And so Apple's mobile devices didn't support it. A jilted Adobe, recognizing the threat this posed to its business, took out magazine ads begging Apple to reconsider, to no avail.

In early 2011, during the last of his medical leaves, Jobs would give his final two product-announcement presentations: one in March for the iPad 2, and one in June for the iCloud service.

Jobs made his last public appearance in June 2011. He proposed a new Apple Campus to the Cupertino City Council. After years of construction, Apple is planning to move into the "spaceship campus" in early 2017.

Jobs stepped down as Apple CEO on August 24, 2011, accepting a role as chairman, after his pancreatic cancer relapsed. Not long after, Jobs died on October 5, 2011, working for Apple until the day before his death. That night, the flags at Apple flew at half-mast.

Tim Cook got the nod as full-time CEO after Jobs' resignation. Apple has continued to grow under Cook, becoming the most valuable company in the world. And the rest, as they say, is history.

But even though the lunches were inexpensive — around $8 according to Forstall — multi-billionaire CEO Steve Jobs still found a way to get around paying for them.

Here's the story in Forstall's words:

"He and I would go to the cafeteria at Apple all the time, and he would insist on paying. I was like, you're paying me enough that I can afford the $8 lunch, but he'd always, if he got his food before he'd wait at the line for me to get up there and he'd pay. And he made it so you could pay with your [Apple] badge. So you'd come up there and you'd badge in, and it would be directly withdrawn from your paycheck. Somehow, I was like, 'Why are you, really, go sit down, I feel like an ass when you're sitting up there waiting for me and I can't get any long-cooking food,' and he said 'No, no, no, this is great. I only get paid $1 per year. I don't know who's paying every time I badge!' He was a multi-billionaire scamming Apple!"

This funny little anecdote was only one of several never-before revealed stories that Forstall told about working at Apple during the Jobs era and the invention of the iPhone.

The entire video is worth watching for any Apple enthusiast. Forstall's interview starts at 1:07 and the lunch story is at 1:56.

SEE ALSO: The ex-Apple exec behind iOS tells the story of the time Steve Jobs saved his life