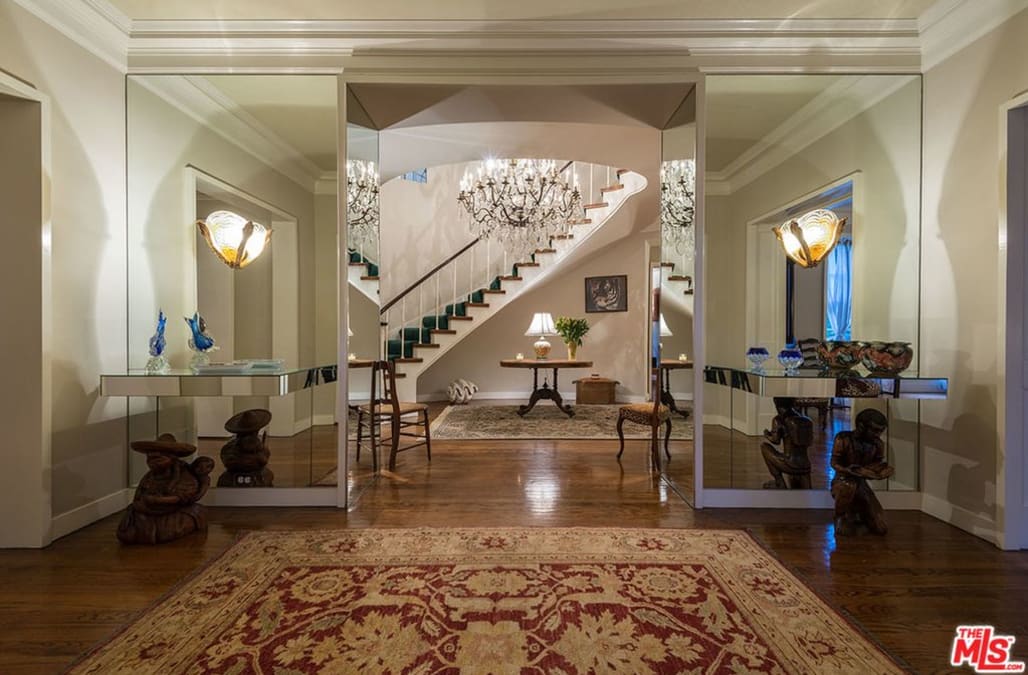 A classic mansion located in the affluent Holmby Hills neighborhood in Los Angeles has hit the market for $14 million -- and the hefty price tag comes with whole lot of Hollywood history.

Known as the Eva Gabor Estate for the iconic socialite who once graced its halls, the 7,000-square-foot property has also been owned by the likes of Audrey Hepburn, Mia Farrow and David Niven.

Perhaps it's no surprise, then, that the home boasts countless luxurious amenities.

Peek inside the stunning home:

Upon entering the gated estate, guests are greeted by a grand foyer with a sweeping staircase and sizable chandelier. Traditional molding and built-in accents are featured throughout the home, and floor-to-ceiling windows frame the estate's magnificent grounds.

The home's 1.1 acres include the main house, a 700-square-foot guest house and a 1,000-square-foot staff apartment. Outdoor amenities include a unique, assymetrical pool and a private tennis court.

See photos of Audrey Hepburn through the years:

The stunning Audrey Hepburn, with a classic swept hair style.

Nautical style for Audrey involves a fun hat and some seriously stylish shades.

A young Audrey takes a stroll through Kew Gardens, in a large-print plaid dress.

Audrey with her fiancee, industrialist James Hanson, wearing a pretty shirt with a high collar.

Audrey poses on a bridge, wearing striped crops and a dark sweater with a peter pan collar.

Audrey cut into a 'Welcome Home' cake, wearing an impeccable belted dress. She had just arrived back in London after the filming of 'Roman Holiday.'

Audrey signed an autograph book for two young girls on the set of director Billy Wilder's film, 'Sabrina'. Hepburn was wearing a skirt suit designed by Hubert de Givenchy with a hat and hoop earrings.

Audrey Hepburn touches up her make-up off the set of 'Sabrina.'

Audrey married Mel Ferrer in a beautiful Balmain dress.  The dress had a tea-length skirt and tiny waist, with wide chiffon shoulders to complement her perfectly.

This looks like a perfect day... Audrey was classically chic in this sweet dress, writing a letter in a palm grove.

Audrey knew how to rock a robe, too -- we love the fun pattern.

Audrey browsing through the wardrobe at a photographer's studio, but we're more interested in what she was wearing!  You probably remember this look: a full length red coat dress with a white poodle motif.

Audrey in a floral-print day dress and sun hat.

Even when she's casual, Audrey looks chic.  Sitting below the Eiffel Tower in Paris, she's wearing a coat we just need to have... stat.

Audrey stands in a park with a poodle and her director Billy Wilder, wearing a shawl with a plaid shirt and shorts.

Possibly the most iconic look of Audrey's, she takes a lunch break while wearing a black dress, gloves and pearls.

Audrey looked impeccable stepping out of a car in this tweed skirt suit.

Audrey looked lovely on stage at the Cinema Festival.

Audrey in a butterfly-patterned dress, standing with Rob Wolders during the 4th Annual Kennedy Center Honors.

Audrey was stunning in this patterned silk dress and coat with matching earrings.

If anyone can rock stripes and polka dots to the Academy Awards, it's Audrey.

We love the pop of pink in the shrug Audrey chose to pair with this sleek strapless gown.

Audrey definitely fell in love with volume in her later years, wearing this material-heavy gown in attendance of the American Film Institute honoring Gregory Peck.

As a UNICEF Goodwill Ambassador, Audrey walks down a village pathway with Vietnamese "Dao" hill tribe children.  She is wearing an ethnic minority traditional costume given to her by the women of this village in northern Vietnam.

The Film Society of Lincoln Center honored Audrey Hepburn in 1991, and she absolutely popped in this brightly patterned coat.

Audrey wore a similar dress to the Casita Maria Fiesta Benefit, but this one paired bright green with a black and gold embellished top.

More from AOL.com:
Egol village in Isle of Skye on the market for $1.5M
'House of Cards' power mansion hits market at $500K
Tiny Boston apartment hits market for a whopping $410,000