KFC is launching a sandwich to the edge of space, and I don't want to live on this planet anymore 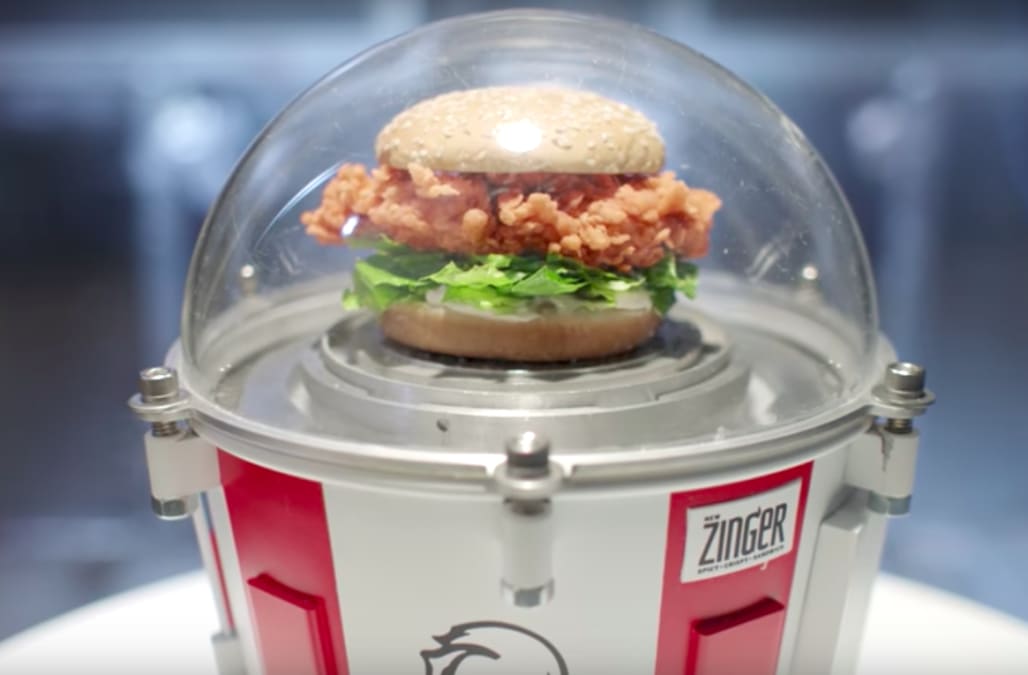 This isn't what President Kennedy had in mind when he ushered in the space age.

In a move that could probably be fairly described as "peak capitalism," KFC and the private spaceflight company World View are teaming up to send a chicken sandwich to the edge of space for a four-day trip into the stratosphere, at about 7 to 30 miles off the ground.

SEE ALSO: Adorable children's letters adorably fly to the edge of space and back

"But in all seriousness, we're proud to support World View's commitment to advancing space research and trust them to take our world famous Zinger sandwich to space."

The Zinger chicken sandwich is scheduled to take flight on June 21. The launch will be broadcast live online.

This whole thing sounds completely ridiculous and frivolous, but it marks an important moment for World View.

"When we were first contacted by KFC to send a Zinger into space, we obviously thought it was quite funny," said Jane Poynter, World View CEO, via email.

"But we quickly realized this was a great opportunity for us to publicly demonstrate our breakthrough Stratollite technology to a large audience while simultaneously financing a significant portion of the vehicle's development."

The system is designed to bring small payloads into the stratosphere for months at a time to deliver internet, Earth-imaging, disaster relief and other applications for a fraction of the cost of a typical rocket launch.

The Stratollite makes use of a large balloon that lofts payloads into the upper stratosphere, which is the layer of the atmosphere immediately above the troposphere, where most weather occurs. The vehicle is designed to navigate while in the air, as it rides the wind to steer.

This Zinger flight will help World View test a lot of technology needed for future flights.

"We're going to learn a lot about long-duration stratospheric flight, while at the same time developing and testing some core systems capabilities that we've never had before," Poynter added.

"For example, this is the first time we'll be testing our solar power system, which is the on-board, regenerative power system that will allow the Stratollite vehicle to ultimately fly for months at a time without interruption. We're also developing and testing a real-time HD video downlink system, among other critical systems improvements."

Eventually, World View wants to fly paying space tourists up to the stratosphere aboard its planned Voyager capsule.

Those hours-long trips will bring people to the edge of space and deliver them back to Earth after showing off the the planet from up to 30 miles above, suspended under a giant balloon.

Strangely enough, KFC has a history of involvement with the U.S. space program.

For its part, KFC, which has been teasing this launch in advertisements for a couple months, isn't new to spaceflight.

"In 1986, KFC underwrote 'Chix in Space,' a student-designed space experiment that was focused on chicken embryo development in microgravity," Robert Pearlman, a space historian and editor of collectSPACE.com, said in an interview.

RELATED: KFC trolls the internet with a 'clean-eating burger'

More on AOL.com:
Millennials are ditching chains like McDonald's for different kinds of fast food
A vegan fast-casual chain you've never heard of is expanding nationwide — and that should scare legacy brands
Mac n' Cheetos are back at Burger King for a cheesy round two