Here's what could happen to America's hundreds of dead malls 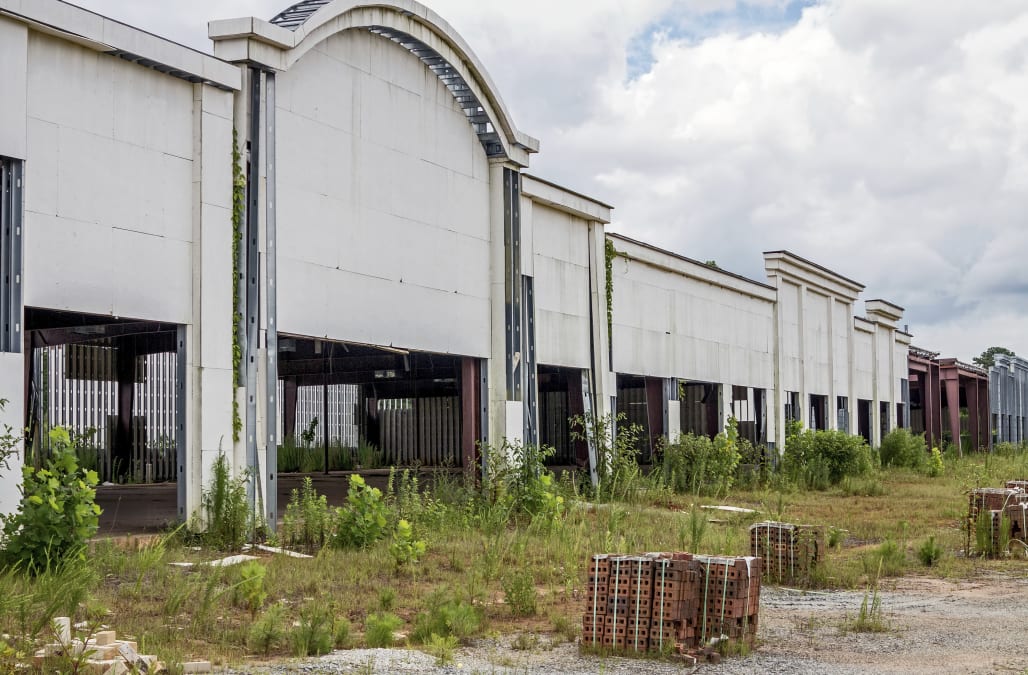 As one of the first post-war suburban shopping centers in the US, the Northgate Mall in northern Seattle defines classic mall architecture.

Its architect, John Graham Jr., pioneered the dumbbell, big-box shape for malls, in which two rows of stores face each other and two department stores anchor each end. Graham also gave the Northgate Mall a grocery store (which later became a food court) and a huge parking lot. In the decades that followed, malls around the country copied Northgate's layout. It became the model for most American malls through the late 20th century.

This design may not be working in the 21st century, however. Hundreds of malls and thousands of mall-based stores have shuttered in the past two decades, and many more may close in coming years. Approximately 2,000 store locations have announced closures since mid-April, and Credit Suisse analysts expect that number to swell to 8,600 by the end of 2017. In a new report, the research firm predicts that 20% to 25% of malls — or about 220 to 275 shopping centers — will shutter over the next five years, largely due to the store closures.

Traditional malls need to transform themselves to stay alive, and many, including Northgate, are making changes to attract more business.

Developers are now turning many of Northgate Mall's parking spaces into a light rail station, which will connect the neighborhood to downtown Seattle. Other parts of the lot have been turned into LEED-certified apartments, senior housing, a medical center, more retail space, and a bioswale that keeps runoff away from the nearby creek.

Malls of the future have an opportunity to fulfill other community needs besides commerce, June Williamson, a City College of New York architecture professor and the author of "Retrofitting Suburbia," tells Business Insider.

Here are what may become of the many failing malls of today:

Before: The department store Nearly every major department store (including Macy's, Kohl's, Walmart, and Sears) has shuttered stores in recent years to reduce losses from unprofitable locations and the rise of online shopping.

The US also just built too many malls, Williamson says. In the mid-'90s, the number of American malls peaked at around 1,500. Today, there are only about 1,000 left.

As more new malls get built, department stores (which often pay a large part of the lease) will move out, making it harder for the mall to survive.

"The development climate of malls were driven less by demand and more by opportunity," Williamson says. "As new centers get built, anchor stores are lured away, and a cannibalization process begins ... Only so many consumers are going to malls, and they will flock to newer ones. If developers build a new mall, they are inevitably undercutting another property. So older properties have to get re-positioned every decade, or they will die."

Closed department stores will likely become other businesses that can benefit from the large square-footage, like fitness centers, churches, offices, public libraries, and even medical clinics, Williamson says.

The number of walk-in clinics in malls rose 15% from 2011 to 2016, according to the Urgent Care Association of America. Last year, Bloomberg reported that a third of all urgent care is now located inside shopping centers.

In 2007, the 100 Oaks Mall redeveloped one of its department stores into the Vanderbilt University Medical Center, which leases over half of 850,000-square-foot building. (The other half is still retail space today.)

In late 2016, the Milpitas Planning Commission in California also approved a plan to turn the abandoned department store in the Milpitas Town Center into a 24-hour gym.

Before: The food court Retail stores are not the only mall businesses that are struggling. Those in the food court are having a hard time, too.

In 2014, Sbarro — the Italian chain that was a food court staple — filed for bankruptcy, and closed 155 of its 400 American locations, most of which were in malls.

As The New York Times noted at the time, "The company is in financial trouble because one of its big bets on real estate — that Americans will keep going to mall food courts en masse — has turned out to be wrong."

Since most food courts have a lot of natural light, they could be used as gathering spaces for community groups or child daycare centers if they close down, Williamson says.

Most failing food courts, however, are redeveloping into clusters of high-priced restaurants right now, like the one at Miami's Aventura Mall, which will get rid of the cheap chains and open a revamped eatery this fall.

When a mall doesn't draw a ton of shoppers, the atrium becomes under-utilized space (that the owner is still paying lease on).

After: Car showrooms and event spaces

Mall atriums are wide-open spaces that can allow for events, like concerts or fashion shows, or serve as showrooms for cars — all of which generate revenue, Williamson says.

In 2000, the atrium at Penn-Can Mall in Syracuse, New York turned into a car dealership, called Driver's Village. Today, the only retail spaces in the mall are a café, a children's party space, an auto accessory store, and insurance companies.

Though not in the US, Toronto's largely abandoned Galleria Mall has come up with another clever use for its atrium: hosting dance parties. As Vice reports, the mall periodically turns itself into a club, called "Shoppers Dance Mart." In the 1990s, the average American shopper would spent multiple hours in a mall, but today, people barely stay for an hour, David Smiley, the assistant director of Columbia University's Urban Design graduate program, tells BI.

When anchor stores pull out, the leases for the other smaller stores often become too high. So they will re-locate to another, more thriving mall, or they close.

Many dead retail spaces will likely morph into businesses that have community-based functions, like apartments, public libraries, indoor farms, and refrigerated spaces for processing food (for local restaurants or grocery stores), Williamson says.

"You'll find DMVs, town halls, and libraries in malls increasingly, the type of place where the public government can interact with the public," Williamson says.

Some public spaces, like libraries, don't bring in much rent, so they mainly serve as a way to attract people to the mall, she says.

"If the mall owners can't keep the place fully leased, this at least keeps people coming who could keep the other leasees from fleeing," she says. "The 'Main Street' was killed by the mall, so developers are trying to build new downtowns inside the malls."

In St. Louis, Missouri, one large store in the Chesterfield Mall became an illustrated children's book museum and a puppet theater, while another in the CoolSprings Galleria in Franklin, Tennessee turned into a gallery that showcases local artists. Since it opened in 2005, the gallery says it has sold over $20 million in artwork.

The three-story Providence Arcade in Rhode Island — America's oldest mall — transformed the majority of its shops into 48 micro-apartments in 2016 (with a hair salon and cafés still on the ground floor). Similarly, New York's White Plains Mall will be torn down and redeveloped into a 20-story residential tower within the next five years.

Smiley says that if a mall is being redeveloped into housing, most of the building will usually get demolished. Most malls have little plumbing and electrical capacity, which residential buildings demand.

Before: The parking lot Huge amounts of surface-level parking can cost malls money and space — and they could use the space for other businesses that bring in revenue, according to the Urban Land Institute. Large lots are more susceptible to flooding, as well.

Mall surface level parking can cost anywhere from $670 to $4,000 annually per space in the US (depending on the location and land costs — in suburban areas, it averages around $900 annually per space), according to a recent report by the Victoria Transport Policy Institute.

Malls may increasingly (and somewhat ironically) turn their surface parking lots into space that emphasizes walking over cars. This, in some ways, would be a nod to the original intended use of a "mall," Smiley says. Until the 1960s, shopping centers had green plazas called "malls," until it became a term for the enclosed center itself.

"The genealogy of the word 'mall' is a landscape term — a pedestrian space. But we've co-opted that term and linked it to retail," Williamson says.

In coming years, she predicts that many malls will downsize the amount of surface parking they offer, and turn it into public space that can benefit the surrounding community.

Everett Mall in Washington, for example, hosts a weekly farmer's market in its parking lot. And in Seattle, Northgate Mall devoted its two southern parking quadrants into a condo building for residents 55 and up. The Smith Haven Mall in Lake Grove, New York holds a summer concert series in its parking lot every year.

Other malls are completely transforming into what Williamson calls "ethnic malls."

Williamson describes ethnic malls as shopping centers that target a specific ethnic demographic in the community. She says this type of customized mall can thrive more than a traditional mall, because it better meets local shoppers' needs.

Located in Forth Worth, Texas, Seminary South Shopping Center turned into La Gran Plaza — a mall aimed at the city's Hispanic community — in the mid-2000s. Instead of a food court with mega-chains like McDonald's and KFC, it now features an eatery of local purveyors who serve Latin food.

The majority of stores were broken up into smaller retail spaces where people can send money abroad, make travel arrangements, and find Spanish-speaking lawyers. One of the department stores also turned into a dance hall where teen girls throw quinceañeras.

Finally, another common mall evolution is to become a "destination mall."

Unlike small suburban centers aimed at shoppers who live nearby, destination malls look to attract shoppers from the entire region.

"The emergence of entertainment as part of the shopping mall is becoming very important," Smiley says. "It keeps people in the center longer. And even if they weren't going to shop for something, they get lured in."

In 2012 and 2013, the Carousel Center in Syracuse, New York re-branded as Destiny USA, and added higher-end restaurants, IMAX screens, an arcade, and indoor go-carting and obstacle courses. According to the mall, the 2.4-million-square-foot complex draws around 29 million people (both from the US and Canada) every year.

Developers in New Jersey are also building a gigantic mega-mall, called American Dream Meadowlands, that will include a Nickelodeon theme park (similar to the one at Minnesota's Mall of America). It's set to open in 2018.

"People will drive miles to these malls, because they will be destinations," Williamson says.

SEE ALSO: The retail apocalypse has officially descended on America