Millennials are killing chains like Buffalo Wild Wings and Applebee's 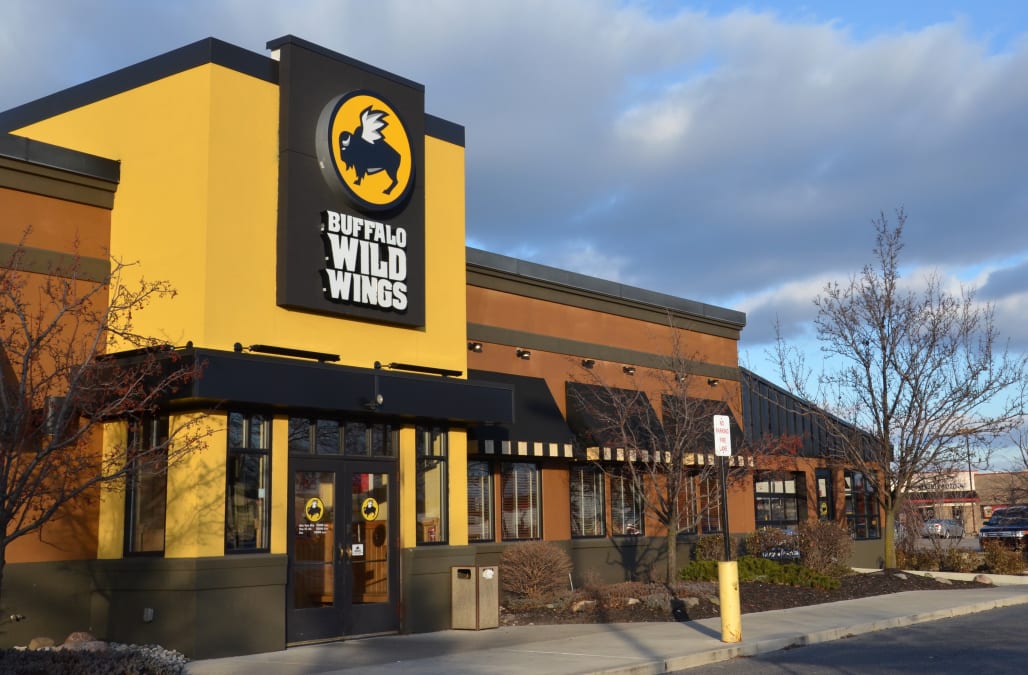 Casual dining is in danger — and millennials are to blame.

Brands such as TGI Fridays, Ruby Tuesday, and Applebee's have faced sales slumps and dozens of restaurant closures, as casual dining chains have struggled to attract customers and grow sales.

According to Smith, these sit-down restaurants' struggles can blamed on the most-frequently besmirched generation: millennials.

Sign up for the email list at Arby’s, and you’ll get a free Roast Beef Classic with the purchase of a beverage.

Register for the email list at Bakers Square, and you’ll get a free entree with the purchase of a second entree and two drinks.

Sign up for the Buca di Beppo e-club, and you’ll get free pasta, plus a $20 gift on your birthday.

Become a member of the Flavorhood at Checkers, and you’ll land a coupon for a free order of large french fries with any purchase.

Brave the elements and join the Blizzard Fan Club at Dairy Queen, and you’ll receive a coupon for a buy one, get one Blizzard treat free.

Sign up for the Raving Fan EClub at Del Taco, and you’ll enjoy two free grilled chicken tacos, plus a complimentary premium shake on your birthday.

Give Houlihan’s your email address, and you’ll score $10 off, plus a free entree on your birthday.

Enlist in the Pancake Revolution at IHOP, and you’ll secure a free full stack of Rooty Tooty Fresh ‘N Fruity Pancakes, plus a gratis meal on your birthday.

Surf over to sign up for the Joe’s Catch E-Club at Joe’s Crab Shack, and you’ll get a free appetizer.

Saddle up for the Steakholders Club at LongHorn Steakhouse, and you’ll get a free appetizer with the purchase of an entree.

Join the Olive Garden E-Club, and enjoy a complimentary appetizer or dessert when you order two adult entrees.

Sign up for the e-club at Maggiano’s Little Italy, and you’ll receive $10 off your next visit.

Say “I do” to the Hut Lovers at Pizza Hut, and you’ll get free cheese sticks with a future online order.

Join the crew of the Fresh Catch Club at Red Lobster, and choose a free appetizer or dessert when you order two adult entrees. You’ll also get a surprise birthday offer.

Catch the wave with Rubio’s Beach Club, and you’ll savor the flavor of a free taco.

Sign up for So Connected at Ruby Tuesday, and you will receive a free appetizer when you join, plus a free burger or Garden Bar entree on your birthday.

Sign up at Subway and agree to receive weekly text offers, and you will get a free 6-inch sandwich with the purchase of a 30-ounce drink.

Join Fridays Rewards, and you’ll get “free food like chips and salsa with every Fridays visit,” according to the chain’s website.

Join the Village Inn e-club, and you’ll enjoy a slice of pie on the house with an adult entree purchase.

"Millennial consumers are more attracted than their elders to cooking at home, ordering delivery from restaurants and eating quickly, in fast-casual or quick-serve restaurants," Smith wrote.

While blaming millennials has become a trend to the point of cliche in retail, Smith isn't wrong to zero in on younger customers' changing tastes as a major factor in casual dining's downfall.

Many of these options involve cooking at home. Grocery chains are increasingly competing with restaurants, thanks to lower prices and perks such as pick-up and delivery, new technology, and trendy features like wine bars and to-go meals. Plus, meal delivery kits such as Blue Apron are focused on getting millennials on a subscription plan that will convince them to stay in and cook a certain number of days a week.

Convenience is also a factor, both when it comes to delivery and speed of service. And casual dining chains are still playing catch-up with regards to delivery.

Cheesecake Factory announced earlier this year it is expanding delivery to half of its 194 US locations through DoorDash, a third party delivery service. T.G.I. Fridays, Chili's, and Maggiano's are all now on Grubhub, and Buffalo Wild Wings and Red Robin are testing the service. Outback Steakhouse is using both third-party services and building its own delivery service.

Then, there are the more convenient chains that have drawn millennial customers away from casual dining options.

The growth of fast-casual chains such as Chipotle and Panera have been especially harmful. These chains manage to bring both convenience and lower prices to millennial customers, who are less enthused about spending more money just for the "experience" of sitting in a booth at a casual dining joint.

The fast-casual industry grew by 550% from 1999 to 2014, The Washington Post reported. By 2020, the fast-casual market in the US is expected to reach $66.9 billion, according to the market-research company Technavio.

"They have more of a healthy perception, there's quicker service times," Wedbush analyst Colin Radke told Business Insider in March. "The healthiness and the speed of service — that's been taking market share from casual dining."

"When you look at the alternatives out there in the marketplace today and who's creating buzz and creating excitement, it's gone away from chain casual dining," John Antioco, TGI Fridays CEO who is attempting to rebrand the chain as a gastropub, told Business Insider.