The antiquing capital of America

Antique dealer Tex Johnson, age 98, shows off a child's dress hoop from the 1800s. She operates one of the longest running single-owner shops in the area, "Tex Jonhson Antiques." Tex's husband is 106, and she has been in the business since the 1970s.

A farm house on the outskirts of Adamstown, Pennsylvania.

A sign for Renninger's Antique Market. Adamstown is home to a 7-mile strip of antique malls with over 5,000 dealers, known as "Antiques Capital USA."

Harold the groundhog is the official mascot of Heritage Antiques in Adamstown, Pennyslvania. Harold has been the Heritage mascot for over 20 years and is dressed differently for each "Antiques Extravaganza."

Customers take a break from antiquing at the cafe inside Renninger's Antique Market in Adamstown, Pennsylvania.

Antiques and collectibles for sale at Reninger's Antique Market.

Vintage masks and collectibles for sale at Renninger's Antique Market in Adamstown, Pennsylvania.

Antiques and collectibles for sale at the Schupp's Grove Outdoor Antique Market.

Shadows and a collectible in a tent in Schupp's Grove Outdoor Antique Market in Adamstown, Pennsylvania.

Extravaganza probably isn't a word you automatically associate with antiquing — but Tex Johnson will make you think twice about that.

"I used to be open from six in the morning until way after midnight, and I'd have a bar upstairs," says the 97-year-old antiques dealer, who's owned Tex Johnson Antiques since the early '70s. She's regaling me with tales of past Antiques Extravaganzas. Known to local old-timers as "Extravs," the three-day events hit the sleepy community of Adamstown, Pennyslvania, every April, June, and September, drawing antique sellers from all over the country.

I traveled to the first Extrav of 2017, where sellers showcase the wares they've been gathering during the long winter. But I'm not just shopping for antiques — I'm also picking up the many life lessons antiquers have to offer.

First lesson: how to maintain good health and high energy for nearly a century of life. Johnson, with her contagious smile, boundless vitality, and impeccably-styled grey hair, elucidates: "Be active."

Also: keep some spare parts around. "I was in a terrible automobile accident, and I'm put together with steel rods — but I'm alive!" she says. "When they stop making spare parts, I'm in trouble!"

For Johnson and the other dealers I meet, collecting the "spare parts" of the world is both a passion and profession. She operates one of the longest-running, single-owner shops in the southeastern area of the state known as Pennsylvania Dutch Country. In her staging room, where she archives and sorts through her inventory, the seasoned dealer explains how the objects themselves sucked her in.

"All you need to do is get one article and learn the history of it, and it leads to a million, million things," Johnson says. "And then you really are hooked."

Adamstown's seven-mile stretch of antique shops and flea markets first became an antiquing hub in 1962, when dealer Charles Weik began filling a tree-lined field with purveyors of various wares. In the winter, sellers moved indoors to stalls at Renninger's, a local farmer's market. As the years passed, other markets popped up on the Adamstown strip. In the 1970s, the town's citizens began calling it the "Antiques Capital of the USA."

As dealers flocked to the area, the town built a community of mismatched folks, drawn together by a love of dusty objects. At Shupp's Grove, the outdoor market where it all began, I meet Marilyn Gehman, the market's owner and operator for the last 25 years. Gehman's father was in the auction business in Pennsylvania. She has a long history with the wares — and the people selling them.

"It's really not about the stuff." Marilyn Gehman, Market owner

"Behind all of the vendors there's a story," Gehman says. "This is more than a market—this is a community... [an] opportunity for kids to have their first job, through high school and college ... for older people, people who have been disenfranchised, [or] who don't fit into the workforce. It's really not about the stuff."

Pennsylvania was a hotly contested battleground state in the 2016 presidential election — Donald Trump beat Hillary Clinton here by less than a percent. In so divided a state, you can't understate the power of antiques to bring people together. Gehman's seen all kinds of friendships blossom here.

"It's a whole mix," she says. "We've had a federal judge setting up next to somebody who's been living in their van for years, and they're perfectly compatible because they have a love of something that they can share."

As if to prove Gehman's point, while I'm standing outside Renninger's Antique Market, a red pickup truck drives down a crowded path with "HILLARY FOR PRISON" and "OBAMA SUCKS" scrawled in Sharpie on the sides of the truck. As it slows to a stop, a weathered man in lumberjack flannel emerges. I brace myself for an awkward encounter.

"Can you believe I'm getting driven around by a Trump supporter?!" dealer Ed Payne asks me. His Trump-loving friend and chauffeur for the day is helping him transport restored pieces of art and pottery — Payne's specialty.

Later, I join a campfire gathering in an area by the flea market entrance called "The Island"— named after a rowdy bunch of Extrav veterans who moved to the higher ground during a particularly soggy year.

I find three dealers who have all been coming to Shupp's to sell their finds since the mid-1960s: Harry Steeles, Clayton Wainwright, and Carl Von Rhine. Usually, The Island's campfire crew is much larger, they explain.

"Most of the time, there's anywhere between eight and 12 of us up here," Von Rhine says. "This is an off day, but also we're getting older ... things happen," adds Steele.

As they roast sausages and peppers on a giant skillet, they share some thoughts on a life spent peddling antiques.

"Every day as an antique dealer is a hunt," says Steeles, who comes from a family of "pickers"—both his mother and father were dealers, too. Von Rhine chimes in: "The stuff don't grow in your garden, you gotta go out and find it."

Von Rhine got into the industry by chance.

"I was workin' construction and my landlord said he was a junkman. So I started going to a flea market and I was making more money buying crap and selling it at a flea market on the weekends than I was workin' 60 hours a week," he says. "So I said, 'alright, time to learn some stuff.'" Picking is a lifetime of learning since carrying certain items requires an understanding of their history and value.

"Every day you learn something new," Von Rhine notes.

Related: See some other top flea markets in the country: 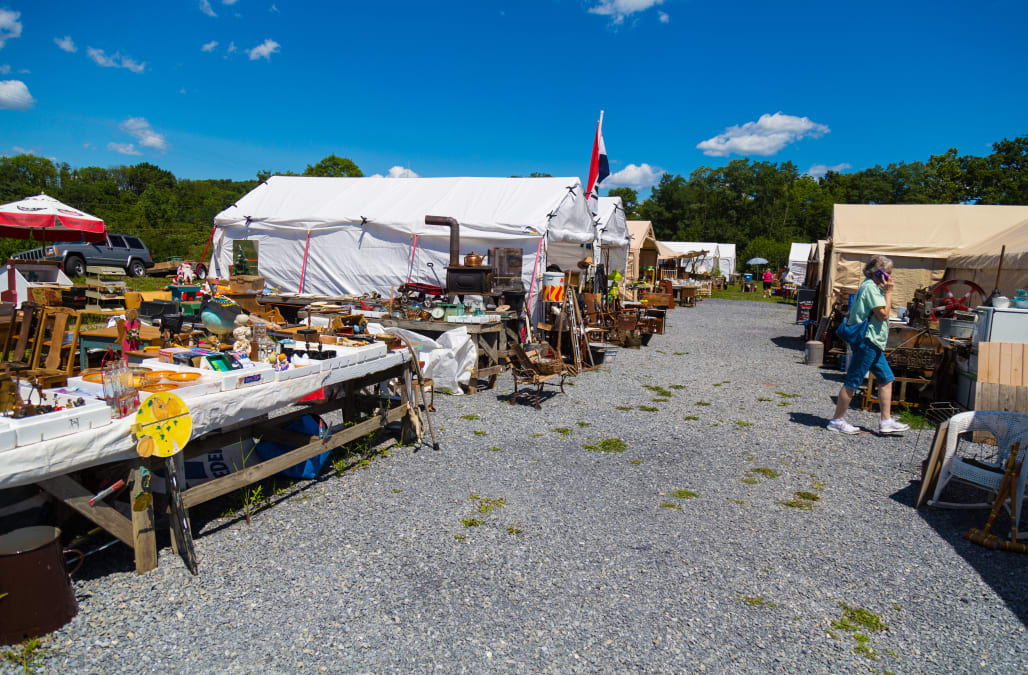 Despite the many virtues of antique dealing, Extravaganza crowds have decreased over time. In its heyday, sellers arrived at Shupp's by 4 a.m., and pickers would already be out with flashlights, looking for treasures.

"It was flashlight madness. Everybody was hungry. Now, the excitement isn't there." Steeles says. Wainwright agrees, adding, "Setting up here, there was about 20 years where you'd have to worry about people bangin' on the back of your truck at 4 o'clock in the morning," he says. "When I was a young man, I used to come up here with a big van full of oak furniture and I'd sell the whole works and make tons of money. But right now, if you've got a piece of oak furniture, you can't give it away."

I can't help but recall a conversation I had earlier that day with Kristine Landis, president of the Antiques Capital USA Association, and manager of one of Adamstown's most prominent antique malls, The Mad Hatter. While she's noticed a decline in collectors, she's also noted newer trends: young people seeking recycled goods to reduce their ecological footprint, or unique objects that can't be found anywhere else.

"There's a lot of sameness in the world — we all have an iPhone, everybody has IKEA," she says. "But you come out here and you can find that one piece to put in your house that's different than everybody else's." And of course, she adds, antiquing offers an experience that can't be found in a box store — or on eBay.

The value of the experience lies in uncovering the stories — of both the objects and the dealers. In that way, it's a bit like photography. Like good photos, the best antiques are found when we go out and look for them, and their stories imbue them with meaning. In this business, people like Steeles and Von Rhine are an essential part of those stories.

When asked what they love most about antiques, Steeles said, "This," while motioning to the rest of the group. "This is the best."