Insurance companies are freaking out about Trump's Obamacare threats 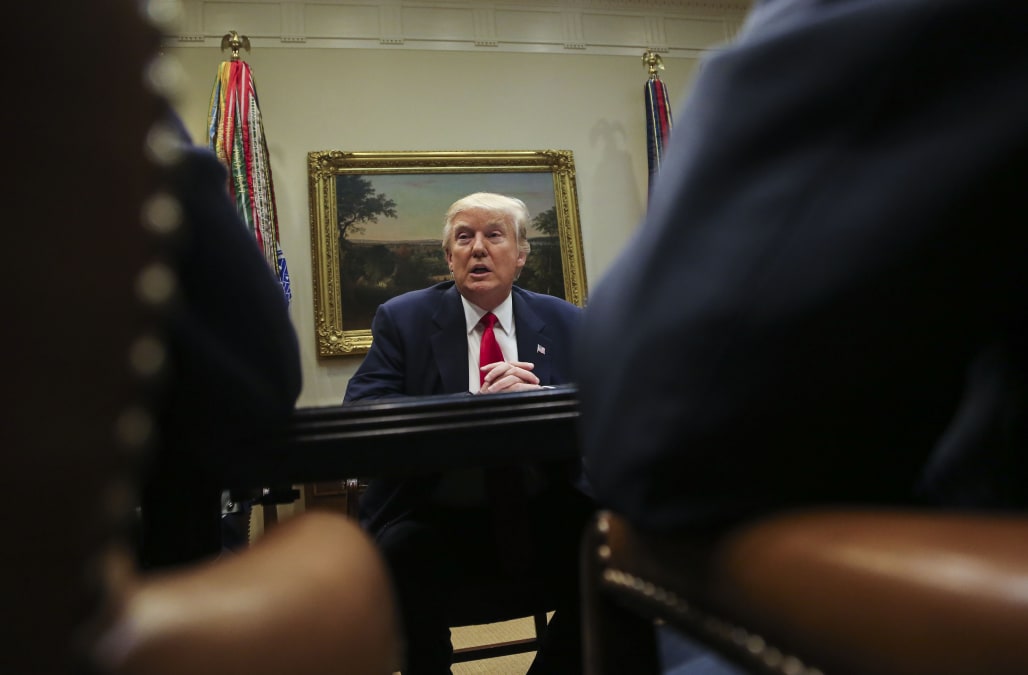 Insurance companies are getting nervous about President Donald Trump's saber rattling on healthcare.

Trump, in interviews and tweets in recent days, has raised doubts about whether the White House will continue to fund the Affordable Care Act's so-called cost-sharing reduction (CSR) payments.

CSR payments are provided to insurers to defray the cost of offering low-income Americans cheaper out-of-pocket costs on the ACA's individual insurance exchanges. The money is funneled through the plans to providers to make up the difference in copays or deductibles paid by Americans making 200% of the federal poverty line or less. Any money not used to lower the costs is returned to the federal government.

Currently, the roughly $8 billion in payments comes from the White House rather than a congressional appropriation. The payments have been the subject of a lawsuit between the Republican-controlled House and the executive branch dating back to the Obama administration.

Trump's recent threats to cease the payments have caused insurers and industry groups to grow increasingly worried about potential losses and their participation in the individual insurance markets.

Anthem, one of the big five public insurance companies, said Wednesday that if CSR payments are not funded, they could either raise premiums in the individual market by as much as 20% or leave them altogether.

Anthem CEO Joe Swedish said on the company's earnings call that it was making the assumption that CSR payments would be funded. He said the company's outlook would change if the payments are pulled.

"However, we are notifying to our states that, if we do not have certainty that CSRs will be funded for 2018 by early June, we will need to evaluate appropriate adjustments to our filing," Swedish said. "Such adjustments could include reducing service area participation, requesting additional rate increases, eliminating certain product offerings or exiting certain individual ACA-compliant markets altogether."

Other major insurers such as Aetna and Cigna also warned earlier in the year that their participation in the exchanges would be based on the payments. Aetna already announced it would pull out of Iowa's marketplace.

"If the CSR is not funded, we will have no choice but to send a notice of default informing the government that we are dropping our contracts for their failure to pay premiums and seek to withdraw from the Marketplace immediately," Molina wrote.

In the letter, Molina — whose company has turned a profit from the exchanges — said without the payments, the company would have to immediately drop up to 700,000 marketplace enrollees if the payments were ceased and 1 million people would lose their coverage in 2018.

Major lobbying groups have also pleaded with the administration and congressional leaders to continue the payments.

"As medical professionals, insurers providing health care services and coverage to hundreds of millions of Americans, and business leaders concerned with maintaining a stable health insurance marketplace for consumers, we believe it is imperative that the Administration and Congress fund the cost-sharing reduction program," the letter read.

The Trump administration told congressional leaders on Wednesday that it would continue to fund the payments for now, but did not make a longer-term commitment that many insurers feel they need to plan for 2018.

Insurers have to submit their plans for 2018 plan year coverage on the exchanges by late June or drop out of the markets.

NOW WATCH: Trump's approval rating plunged to 35% in just 69 days — here's how that compares to other presidents

SEE ALSO: Trump goes on raging tweetstorm against Democrats over negotiations to avoid a government shutdown