Here's what 24 of the most popular brand names really mean 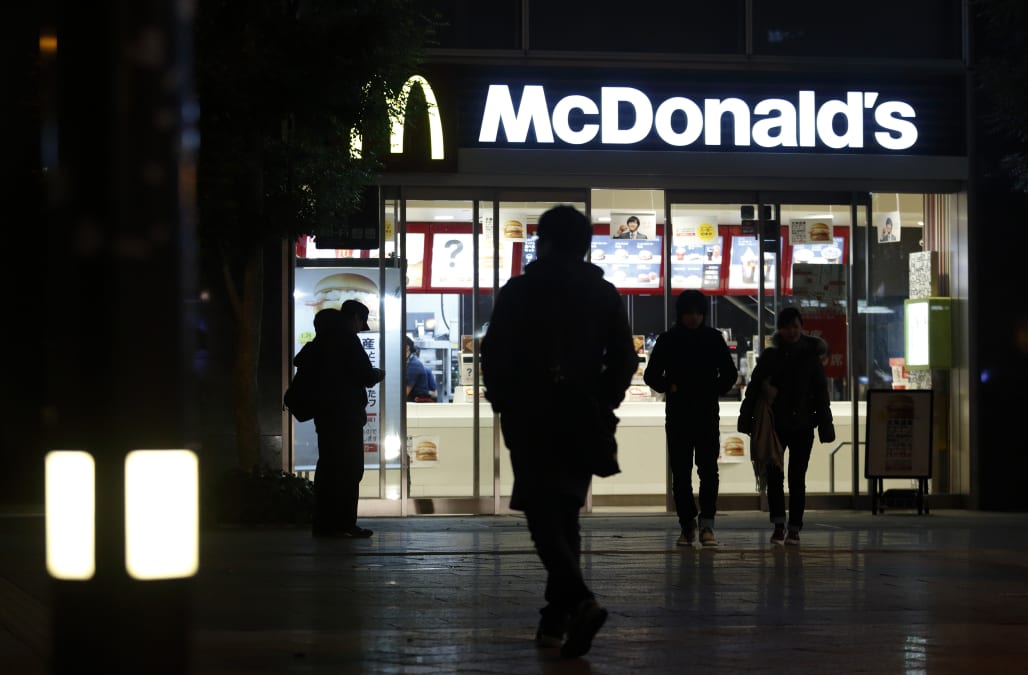 You're wearing your favorite Nike sneakers and Lululemon pants when you head to the mall to do some shopping at the Gap. On your way there you grab a latte at Starbucks.

After a few good hours of shopping, you head to Panera to meet a friend for lunch. You Venmo her for the meal and then you both decide dessert is in the cards: Next stop, Häagen-Dazs.

All these brands are staples in our lives. But do you have any idea what their names actually mean? We're here to help.

Here's what 24 of the most popular brand names really mean

Pepsi was named after the medical term for indigestion.

The inventor of Pepsi, Caleb Davis Bradham, originally wanted to be a doctor, but a family crisis meant that he left medical school and became a pharmacist instead, according to the company website.

His original invention, known as “Brad’s Drink,” was made from a mix of sugar, water, caramel, lemon oil, and nutmeg. Three years later, Bradham renamed his drink, which he believed aided digestion, to “Pepsi-Cola," taken from the word dyspepsia, meaning indigestion.

Panera is a portmanteau of the words "pan" and "era."

According to Panera's Facebook page, the sandwich chain's name "has Latin and Spanish roots."

In Spanish, "pan" means bread and "era" means age or time. So put together, Panera means "age of bread."

Ron Shaich, the founder of Panera, also told Fortune the name comes from the Latin word for breadbasket.

Google owes its name to a typo.

Google's name emerged from a brainstorming session at Stanford University. Founder Larry Page was coming up with ideas for a massive data-index website with other graduate students, Business Insider reported.

One of the suggestions was "googolplex" one of the largest describable numbers. The name 'Google' came about after one of the students accidentally spelled it wrong. Page then registered his company with this name.

McDonald's is named after two brothers who ran a burger restaurant.

Raymond Kroc, the founder of McDonald's, was a milkshake machine salesman when he first met brothers Dick and Mac McDonald, who ran a burger restaurant in San Bernardino, California.

The McDonald brothers bought several of his Kroc's Multimixers and he was so impressed by their burger restaurant that he became their agent and set up franchises around the US, Money reported. Years later, he bought rights to the McDonald's name.

Adidas isn't an acronym for "All Day I Dream About Soccer."

If you, like me, thought Adidas stood for "All Day I Dream About Soccer," you're wrong. It turns out the athletics-apparel brand is named after its founder, Adolf Dassler, who started making sport shoes when he came back from serving in World War I, according to the LA Times. The name combines his nickname, Adi, and the first three letters of his last name.

J. Crew's name set it up to compete with Ralph Lauren's Polo line.

According to Forbes, "The name Crew was picked to compete with Ralph Lauren’s Polo label and [founder Arthur] Cinader added the J because he thought it added [cachet]."

Makes sense. Polo and crew are both pretty preppy sports.

"A genie whispered 'Rolex,'" in the founder's ear.

Hans Wilsdorf, the founder of Rolex, wanted a brand name that could be said in any language, Business Insider reported.

"I tried combining the letters of the alphabet in every possible way," said Wilsdorf, according to Rolex. "This gave me some hundred names, but none of them felt quite right. One morning, while riding on the upper deck of a horse-drawn omnibus along Cheapside in the City of London, a genie whispered 'Rolex' in my ear."

Lululemon means nothing at all. And it's intentionally hard to pronounce.

Lululemon founder Chip Wilson came up with the yoga-wear brand's name because he thought Japanese people wouldn't be able to pronounce it.

"In essence, the name 'lululemon' has no roots and means nothing other than it has 3 'L's' in it. Nothing more and nothing less."

A representative for Lululemon told Business Insider that the brand's name was chosen from a list of 20 brand names and 20 logos by a group of 100 people.

Zara founder Amancio Ortega originally named his company after the 1964 film, “Zorba the Greek." But this didn't last long.

The first store, which opened in La Coruña in 1975, happened to be two blocks down from a bar called Zorba, The New York Times reported. Ortega had already made the mold for the letters of his sign when the bar owner told him that it was too confusing for them to have the same name.

In the end, Ortega ended up rearranging the letters to make the closest word he could come up with — hence Zara, according to The New York Times.

ASOS is an abbreviation of AsSeenOnScreen.

The British online retailer was founded as AsSeenOnScreen in 1999 and lived at asseenonscreen.com. The abbreviation ASOS — which, by the way, is pronounced ACE-OSS — quickly caught on, and the website was shortened to asos.com.

IKEA isn't a Swedish word that you don't understand.

Founder Ingvar Kamprad chose the brand name by combining the initials of his own name, IK, with the first letters of the farm and village, where grew up in southern Sweden: Elmtaryd and Agunnaryd.

Starbucks is named after a character in Moby-Dick.

In an interview with The Seattle Times, Starbucks cofounder Gordon Bowker told the story of how they arrived at the name. At first, they were going through a list of words beginning with "st" because they thought those were powerful.

"Somebody somehow came up with an old mining map of the Cascades and Mount Rainier, and there was an old mining town called Starbo," he said. "As soon as I saw Starbo, I, of course, jumped to Melville's first mate [named Starbuck] in Moby-Dick."

Soylent gets its name from a sci-fi novel.

Soylent — that meal-replacement drink that's a Silicon Valley favorite — got its name from the science-fiction novel "Make Room! Make Room!" which is about how population growth depletes the world's natural resources. In the book, soylent is a blend of soybeans and lentils.

Gap refers to the generation gap between adults and kids.

The first Gap store opened in 1969 with the goal of selling good jeans. The name referred to the generation gap between adults and kids.

Wawa is named after an area of Pennsylvania.

The convenience-store chain's name means two things: 1. It's the name of the area in Pennsylvania where the company's first dairy farm was located. 2. It's a Native American word for a Canada Goose (the one pictured in the company's logo).

(Photo by Matt McClain for The Washington Post via Getty Images)

Häagen-Dazs may sound Danish, but it's completely made up.

Reuben Mattus, a Jewish immigrant from Poland, named his ice-cream company Häagen-Dazs as a way to pay tribute to Denmark, according to an interview with the Jewish news publication Tablet Magazine. But the name doesn't actually mean anything.

“The only country which saved the Jews during World War II was Denmark, so I put together a totally fictitious Danish name and had it registered,” Mattus said. “Häagen-Dazs doesn’t mean anything. [But] it would attract attention, especially with the umlaut.”

Nike is the Greek goddess of victory.

Gatorade was developed for the Florida Gators.

A team of doctors at the University of Florida developed the sports drink for the Florida Gators football players, who were struggling to play in the heat.

Venmo was inspired by a dead language.

Andrew Kortina, founder of the digital-payments app, writes on Quora:

"When we were brainstorming names, one of the roots we were exploring for inspiration was the Latin, vendo/vendere, 'to sell.' As soon as we said venmo, we liked it because it was short and made for a good verb: 'Just Venmo me for dinner.'"

Under Armour decided to use the British spelling because it made a better phone number.

The name Under Armour came about somewhat accidentally, according to The Washington Post's interview with CEO Kevin Plank. Plank said he had landed on the name Body Armor, but couldn't get the name trademarked. He told The Post:

"I was a bit dejected, but I had lunch plans that afternoon with my oldest brother, Bill. So, I show up to pick him up, knock on the door, and he looks down at me the way only an older brother can look at a younger brother, and he asks, “How’s that company you’re working on, uhh ... Under Armor?”

So how did Under Armour end up with that weird spelling?

"The reason we added the 'U' in 'Armour' is that I was skeptical at the time about whether this whole internet thing would stick," Plank told The Post. "So I thought the phone number 888-4ARMOUR was much more compelling than 888-44ARMOR. I wish there was a little more science or an entire marketing study behind it, but it was that simple."

Amazon was named after the world's biggest river.

When Amazon first launched in 1995, founder Jeff Bezos had a different idea for his brand name.

Bezos wanted to call his online bookstore Cadabra, according to Brad Stone's book about the company. But Amazon's first lawyer, Todd Tarbert, managed to convince him that the name sounded too similar to "Cadaver."

Bezos is also said to have favored the name Relentless, and if you visit Relentless.com today, you'll be redirected to Amazon's website, Business Insider reported.

Bezos finally settled on Amazon, named after the largest river in the world, and incorporated an image of the river in the company's first logo.

Monsanto is the middle name of the founder's wife.

Agrochemical company Monsanto was founded in 1901 by John F. Queeny. He named the business after his wife, Olga Monsanto Queeny.

Verizon was the product of a merger between Bell Atlantic and GTE, both telecommunications companies. The name is a mix between the latin word "veritas" meaning "truth," and horizon, which is meant to signify that the brand is forward-looking.

JCPenney is named after its founder, whose name is just too good to be true.

With a name like James Cash Penney, it's as if the retail founder was born to make money.