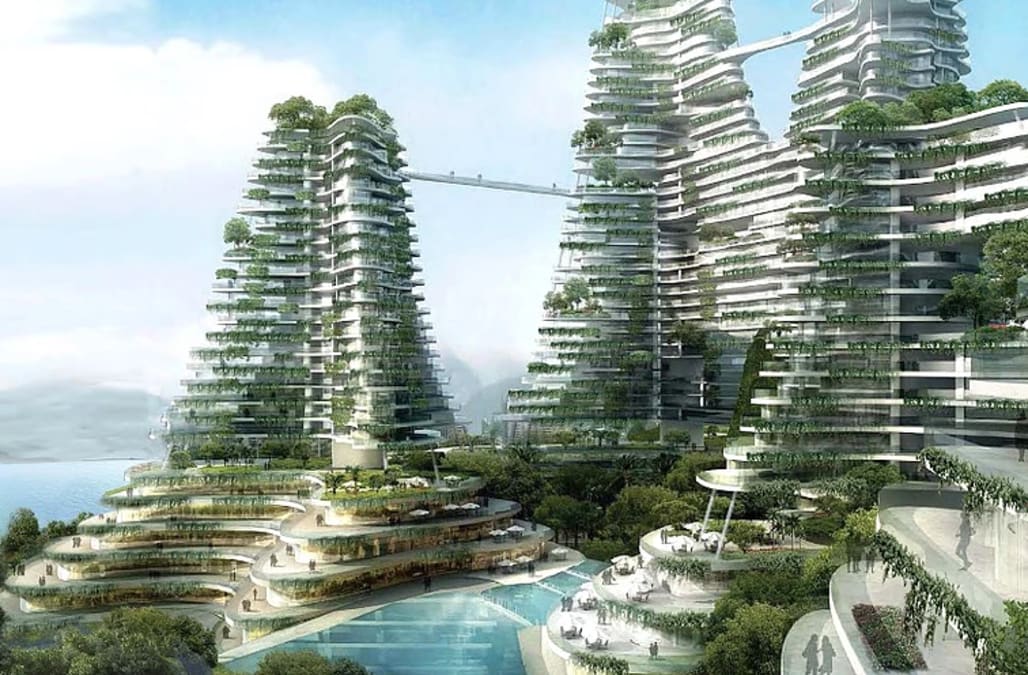 The $100 billion metropolis, called Forest City, is being built by Chinese developer Country Garden. The developers bill it as "a dream paradise for all mankind."

While the mega-development sounds promising, several writers and housing experts worry it could become a ghost city — in this case, a high-tech, luxury urban center that fails to attract many residents. Since the 1970s, Chinese developers have built some-500ghost cities in China.

Nearly 60 home buyers, 70% of which are Chinese, have now cancelled their leases in Forest City, reportedly due to China's increasing efforts to curb money from leaving the country. In late March, China set new restrictions on the ways Chinese can invest and use their credit cards abroad, according to The New York Times.

While Forest City's developer is Chinese, residents must make housing payments in Malaysia. As a result, many Chinese buyers say they are having trouble making credit card payments on their Forest City apartments, due to the government's restrictions on transactions.

A spokesperson from Country Garden told Business Insider on April 7 that it is talking to buyers who may break their contracts to work out payment issues. The company will also issue refunds to those who decide to pull out.

Take a look at the city's plans below.

Set to be complete by 2040, Forest City will be located on four man-made Malaysian islands. Construction began in early 2016, and the project is expected to be the largest overseas project by a Chinese developer.

The 5.4-square-mile city — about four times the size of Central Park — will be able to accommodate 700,000 people.

“This is a very dense development. The density will be greater than Manhattan,” Michael Grove. one of the development's master-planners from New York-based design firm Sasaki, tells Business Insider.

The entire project is set to create approximately 250,000 housing units.

So far, the supply of housing is outpacing demand. In 2016, Country Garden sold 15,000 of the 250,000 Forest City residential units, totaling about $2.6 billion in sales, according to Yu Runze, the company’s chief strategy officer.

Nearly 60% of the development’s commercial space is also under contract, including from high-end fashion and furniture retailers.

China is known for its hundreds of ghost cities, including Kangbashi, Tianducheng, and Chenggong, which have yet to attract many residents. Just 100,000 people, for example, live in Kangbashi, which is designed for 500,000.

Tianducheng, Kangbashi, and Chenggong are all developments built within the last two decades. As Wired and Gizmodo note, developers constructed swaths of luxury housing complexes and charged inflated home prices there, which largely kept Chinese residents from coming.

Though Forest City will be in Malaysia, it will be built by Chinese developers, who say the housing will be affordable for middle-class residents. But the islands' buildings are going up faster than people are signing leases, due in part to China's increased credit card restrictions.

Grove is optimistic about Forest City.

“This is a private developer. This isn’t the government throwing money at a project wastefully,” he says. “This is a developer who’s very careful about their bottom line. They have investors that they need to be responsible to and show that it’s profitable and becoming a successful place.”

The Malaysian government is involved, however. It granted Country Garden tax incentives to develop the area and encourage job growth. Runze says that these incentives will encourage businesses and residents to come to Forest City.

“There will be an overflow of population from Singapore and the rest of Asean that have a large young population with disposable income looking for affordability and quality living,” he says.

When developers build these kinds of cities in China, they often hope that new residents will migrate from crowded centers nearby, like Beijing and Shanghai. But middle-class Chinese often can’t afford to live there.

In Forest City, many future residents may come from Singapore, Grove says. If they still work in Singapore, they'll be able to easily commute by train, water taxi, or car. In 2016, Country Garden built a $67 million, 3.6-mile highway that connects the two cities.

Luxury two-bedroom apartments start at $180,000 — around a fifth of what buyers would typically pay in central Singapore.

In 2017, Runze says that Country Garden will look to sell to more international markets, including Japan, South Korea, India, the Middle East, Europe, and the US.

The development is setting up show galleries in Vietnam, Myanmar, Taiwan, Dubai and Japan in the coming months.

Forest City’s designers prioritized a pedestrian-friendly, mixed-use urban plan, including plenty of civic amenities (like museums and libraries) and outdoor public space (10% of the islands will be parks).

“We wanted to make sure this wasn’t a high-end, gated community,” Grove says.

Because these islands are man-made, their shores could erode over time. The urban planners extended the shoreline to make it adaptable to sea level rise, Grove says.

They also designed a 250-hectare seagrass preserve and are building 10 kilometers of mangroves, shrubs that act as homes for marine organisms, on each island. Forest City even features parking garages with first floors that are intentionally designed to flood.

“In 100 years, we might not need as many cars anyway, so we may not even need parking infrastructure,” Grove says.

Despite the fact that some buyers are pulling out, Country Garden says it's still committed to building the city. The company is in the midst of developing the first island.

"Forest City is an ambitious project that will take 20 years to materialize," Runze says.