Applebee's, TGIF Fridays, and Chili's are trying to claw their way out of a restaurant death trap 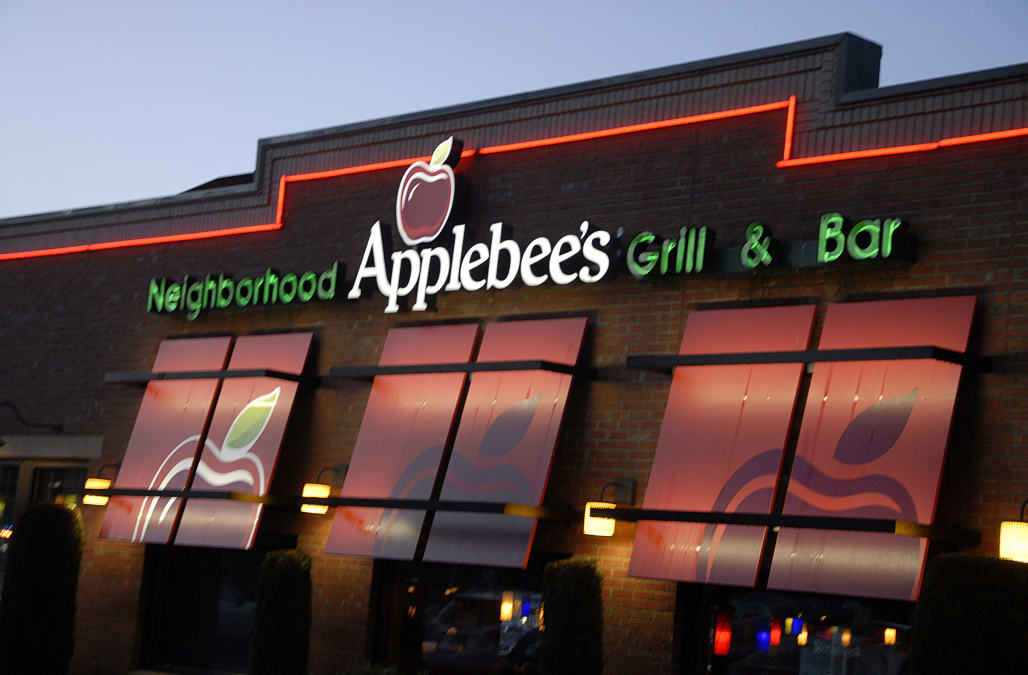 The casual dining industry is in hot water.

2016 was the worst year for the restaurant industry since the recession, according to data from industry tracker TDn2K. The year saw a 2.4% drop in same-store sales — the biggest decline in more than five years.

The weakest link in the industry was casual dining, which was the bottom performer in all but two months of the year. And, some of the biggest names in the casual dining business are feeling the negative effects.

Ruby Tuesday is in search of a new CEO and in the process of selling 95 restaurants amidst falling sales. Bloomin' Brands, the parent company of casual dining chains including Outback Steakhouse and Carrabba's Grill, announced plans in February to close 43 locations after a "challenging" 2016. Buffalo Wild Wings — where same-store sales fell 2.4% in 2016 — is engaged in a power struggle with activist investor Marcato Capital. Stocks of Chili's parent company, Brinker International, reached their lowest price in almost four years in late January after the company missed analysts' predictions and cut full-year guidance.

"In terms of casual dining, a lot of it kind of comes down to the brands that are just kind of dated," Radke said.

Increasingly, customers — especially younger customers — are craving convenience, coming in the form of trendy and inexpensive fast-casual chains like Chipotle and Shake Shack.

The fast-casual industry grew by 550% from 1999 to 2014, The Washington Post reported. By 2020, the fast-casual market in the US is expected to reach $66.9 billion, according to the market-research company Technavio.

"They have more of a healthy perception, there's quicker service times," Radke said. "The healthiness and the speed of service — that's been taking market share from casual dining."

The decline of the shopping mall has also hurt casual dining chains, many of which have a large proportion of locations in or near suburban malls and depend on traffic from hungry shoppers. TGI Fridays CEO John Antioco, for example, told Business Insider that the chain's decision to open more locations in the suburbs seven to eight years ago contributed to the brand's current struggles and sales slump.

Lower grocery prices are convincing more customers to eat at home instead of spending more to eat at casual dining chains. Going out to eat, diners' options seem almost limitless, with CEOs worrying that the country is "over-retailed," creating too much competition in the restaurant industry for chains to succeed. Plus, when customers are willing to spend a little more to sit down for a meal, they're gravitating towards independent restaurants.

"When you think about the options people have today for food — prepared food whether its a restaurant or the high-end super market that's ever increasing its selection, or it's meals being shipped to your door from online services — our goal has to be to create an experience in the restaurants that makes Fridays being worth going to," Antioco said.

The search for an escape route

"When you look at the alternatives out there in the marketplace today and who's creating buzz and creating excitement, it's gone away from chain casual dining," Antioco told Business Insider.

For Fridays, that means trying to ditch the industry all together. Antioco says the brand hopes to capture the buzz of the trendy gastropub, with plans to redesign restaurants to emphasize the bar, add endless apps as a permanent menu item, and focus on urban (not suburban) markets.

Fridays isn't alone in trying to escape the casual dining curse. Chains such as Fridays, Olive Garden, and Chili's are all hoping to boost sales by investing in new technology and debuting new takeout and delivery strategies.

However, like Fridays, the biggest change these chains hope to achieve is all about their reputations. Over the last year, chain after chain has declared a new strategy to "differentiate" itself from the competition — but few are producing concrete results.

Applebee's is adding wood-fired grills to locations. Chili's is adding craft beers to the menu. Red Lobster is launching more premium seafood items. And, Olive Garden is expanding its "endless" promotions with the Endless Classics Deal.

"We have to continue to innovate from a culinary standpoint," Gene Lee, the CEO of Olive Garden's parent company Darden Restaurants, said in an earnings call in December. "We've got to do a better job from a service standpoint and we've got to create environments that people want to come to because they have more choices."

Yet, so far, very few of these strategies have proven successful.

Applebee's provides a prime example in how a brand reboot can fall flat. Last May, the brand announced it was launching a "comprehensive business transformation," installing wood-fired grills in all 2,000-plus locations across the US — a $40 million investment by the chain's franchisees. The grills were supposed to usher in a new era for Applebee's, in which the chain transcended the industry slump and attracted customers with its higher quality items.

Instead, as of mid-February, restaurants were still not seeing return on the investment, with Applebee's comparable sales dropping 5% in the US 2016 — 7.2% in the fourth quarter. Now, parent company DineEquity is on the hunt for a new CEO, as Julia Steward announced she was stepping down when the company reported earnings.

Applebee's isn't alone. When asked if he could name a single casual dining chain bucking the industry's slump, Radke was silent for 10 seconds, until finally admitting he couldn't think of a single successful public casual dining company.

One of the few chains that seems to be seeing at least somewhat of a comeback as the industry continues its downward spiral is Red Lobster. While the chain's sales are no longer public, as Red Lobster was taken private three years ago during a period of slumping sales, the company told Business Insider that it is now growing sales and guest satisfaction has reached all time highs.

According to CEO Kim Lopdrup, the chain found success in doing what the majority of casual dining chains are attempting to do — distinguishing itself by going premium. Red Lobster made concrete investments to boost its image, such as increasing the size of the shrimp up to 47%, changing seafood preparation methods, and adding "specialist" seafood like Alaska Bairdi crab and seasonal Coho salmon to the menu.

"Guests come to Red Lobster for an experience. Consumers view seafood as being special and enjoy it for celebratory or romantic occasions, or as a reward for doing something great, or as a relaxing escape," Lopdrup told Business Insider. "That's why guests come to us. Limited service burgers and burritos just don't cut it on those occasions."

In essence, Applebees and Red Lobster have followed the same playbook. In the last year, one seems to have come back from the ashes, while the other slid father into a pit of despair. As other casual dining chains attempt to follow similar comeback strategies, there's little evidence to prove that all can thrive by simply improving ingredients and boosting experience.

In 2017, there are simply too many restaurants open in the US for all of them to thrive. Ultimately, some locations — and perhaps even some brands — will be forced to admit defeat.

Customers are sick and tired of casual dining chains. So, unless chains can escape the industry and their reputations, expect these restaurants to continue to close.

Sign up for the email list at Arby’s, and you’ll get a free Roast Beef Classic with the purchase of a beverage.

Register for the email list at Bakers Square, and you’ll get a free entree with the purchase of a second entree and two drinks.

Sign up for the Buca di Beppo e-club, and you’ll get free pasta, plus a $20 gift on your birthday.

Become a member of the Flavorhood at Checkers, and you’ll land a coupon for a free order of large french fries with any purchase.

Brave the elements and join the Blizzard Fan Club at Dairy Queen, and you’ll receive a coupon for a buy one, get one Blizzard treat free.

Sign up for the Raving Fan EClub at Del Taco, and you’ll enjoy two free grilled chicken tacos, plus a complimentary premium shake on your birthday.

Give Houlihan’s your email address, and you’ll score $10 off, plus a free entree on your birthday.

Enlist in the Pancake Revolution at IHOP, and you’ll secure a free full stack of Rooty Tooty Fresh ‘N Fruity Pancakes, plus a gratis meal on your birthday.

Surf over to sign up for the Joe’s Catch E-Club at Joe’s Crab Shack, and you’ll get a free appetizer.

Saddle up for the Steakholders Club at LongHorn Steakhouse, and you’ll get a free appetizer with the purchase of an entree.

Join the Olive Garden E-Club, and enjoy a complimentary appetizer or dessert when you order two adult entrees.

Sign up for the e-club at Maggiano’s Little Italy, and you’ll receive $10 off your next visit.

Say “I do” to the Hut Lovers at Pizza Hut, and you’ll get free cheese sticks with a future online order.

Join the crew of the Fresh Catch Club at Red Lobster, and choose a free appetizer or dessert when you order two adult entrees. You’ll also get a surprise birthday offer.

Catch the wave with Rubio’s Beach Club, and you’ll savor the flavor of a free taco.

Sign up for So Connected at Ruby Tuesday, and you will receive a free appetizer when you join, plus a free burger or Garden Bar entree on your birthday.

Sign up at Subway and agree to receive weekly text offers, and you will get a free 6-inch sandwich with the purchase of a 30-ounce drink.

Join Fridays Rewards, and you’ll get “free food like chips and salsa with every Fridays visit,” according to the chain’s website.

Join the Village Inn e-club, and you’ll enjoy a slice of pie on the house with an adult entree purchase.