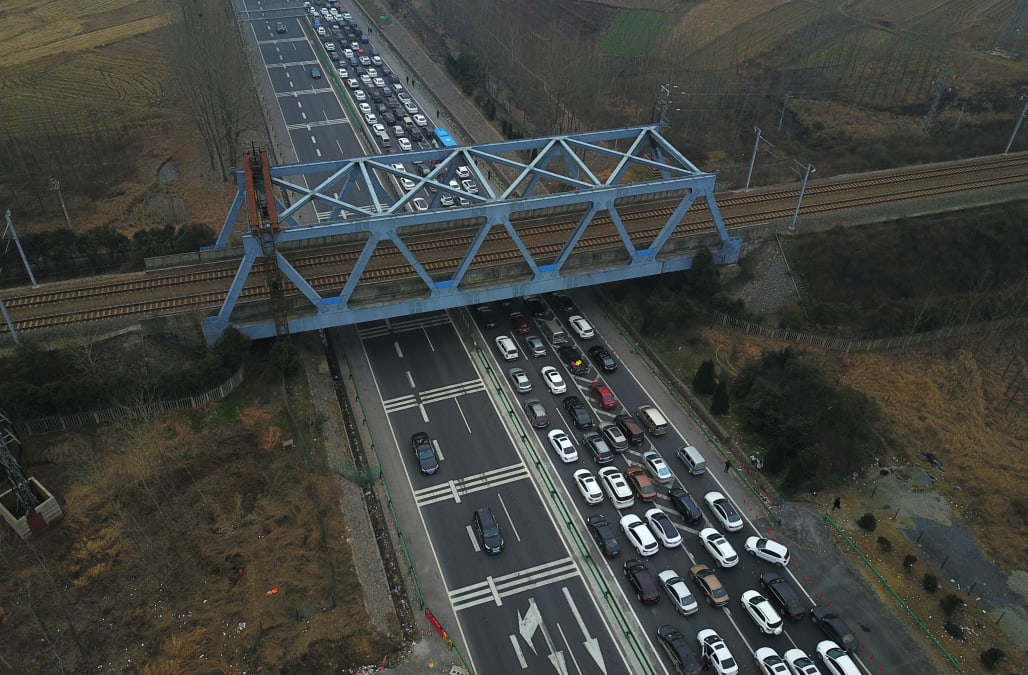 If all goes to plan, China will have moved 250 million people — equivalent to the entire population of Indonesia — into its burgeoning megacities by 2026.

The move lies at the heart of the "National New-type Urbanization Plan," a program launched in 2014 that expands existing cities by gobbling up rural farming communities on the fringes.

The goal is to make China better at making and selling its own goods instead of relying on shipping clothes and electronics overseas to make money.

But as photographs of the transition reveal, sometimes the real cost of building highways, bridges, and rail lines threatens people's entire way of life.

Henan province, China, 1867. Already at 363 million people, the country was poised for a boom. Within a century, China started to export hundreds of billions worth of electronics goods and manufacturing equipment. Shanghai's budding financial district is seen below. In 1995, the limits of China's expanding infrastructure were revealed during a massive flood. Officials at the time said simple flaws, like leaky pipes, could end up costing the country billions every year. The cause of the flood was traced back to a water main burst. The world's largest McDonald's sat in central Beijing, looking over buildings that had just been demolished. Cranes in the background were becoming common sights in big cities. As the 20th century neared its end, Western companies began to set up shop China. Communist leader Deng Xiaoping's mission to bring manufacturing to the country, adopting the capitalistic ideals of the West, accelerated the country's urban sprawl. By the turn of the century, new buildings were sprouting up all over China. But there were hiccups: In 2000, a public housing scandal resulted in the planned deconstruction of two major buildings. The demolition set China back $32 million. Around that time, the country began construction of the colossal Three Gorges Dam. The dam traverses the Yangtze River and is now the single largest power station in the world. Even with China's preference for swiftness, construction took 18 years. In less than a decade, China managed to grow infrastructure around the dam and prevent the catastrophic floods that had once plagued the country. By 2006, the two-mile-long reservoir upstream from the dam had finally been filled. A 1973 satellite photo shows how untouched the area was back then — vegetation is in red, and the wispy gray parts are urban areas. By 2003, industry had taken over. The plant-covered regions were shrinking by the year, getting pushed further inland from the river to make room for communities that relied on it for resources. China's plan to merge big cities like Beijing with smaller suburbs — creating megacities of 10 million-plus — is fully underway. Here, the Hong Kong-Zhuhai-Macao Bridge is seen under construction. It will link three cities and cut commuting time in the Pearl River Delta. The construction makes for a striking rich-poor divide, as industry edges out the rural regions. Below a man walks during low tide in front of the fast-developing city of Shenzen, part of the Pearl River Delta megacity. Though industry is fast-growing, questions around funding linger. Chinese officials have expressed doubt about whether the money being spent on infrastructure can keep pace with the urbanization plan. Transportation will play a huge role in joining the megacities together. It's China's hope that more rail lines and highways will allow its workers, who mostly commute into cities, to shave hours off their travel time. Planned demolitions have become the norm in China. To make room for the hundreds of millions of people that will relocate to the megacities, China's government makes sacrifices. Here a residential high-rise is razed to make room for a traffic hub. There is devastation, too. Prioritizing speed over accuracy, the government in Guangzhou accidentally demolished one woman's home during a routine project. Here she tries to attack a worker with a brick. Overwhelmed with the sense of loss, the woman, Huang Sufang, later leapt to her death. Though a rare case, her suicide highlighted how profoundly the plan can affect China's residents. For the millions of farmers who live outside the cities, a sense of uncertainty remains. Farmers have few property rights in China, and the Communist Party has repeatedly made claims to join urban and rural markets to improve conditions. In many parts of the largest cities, migrant workers live in rundown buildings that sit squarely inside a perimeter of giant office buildings — making clear the income discrepancies found all throughout China. Some of these houses are temporary, like this house built for migrant workers near a construction site in Guangzhou, Guangdong province. Income inequality is merely a small hurdle, however. China has managed to build enormous highway systems and erect mammoth buildings that, someday, will challenge industrialized nations in their domestic output. The China of 1867, with its rolling rocks and handmade huts, has been transformed. The country's urban regions are humming with growth. Uniform buildings sit shoulder to shoulder. But for all its growth, the towers and cranes only show a fraction of what's in store. China is just getting started.