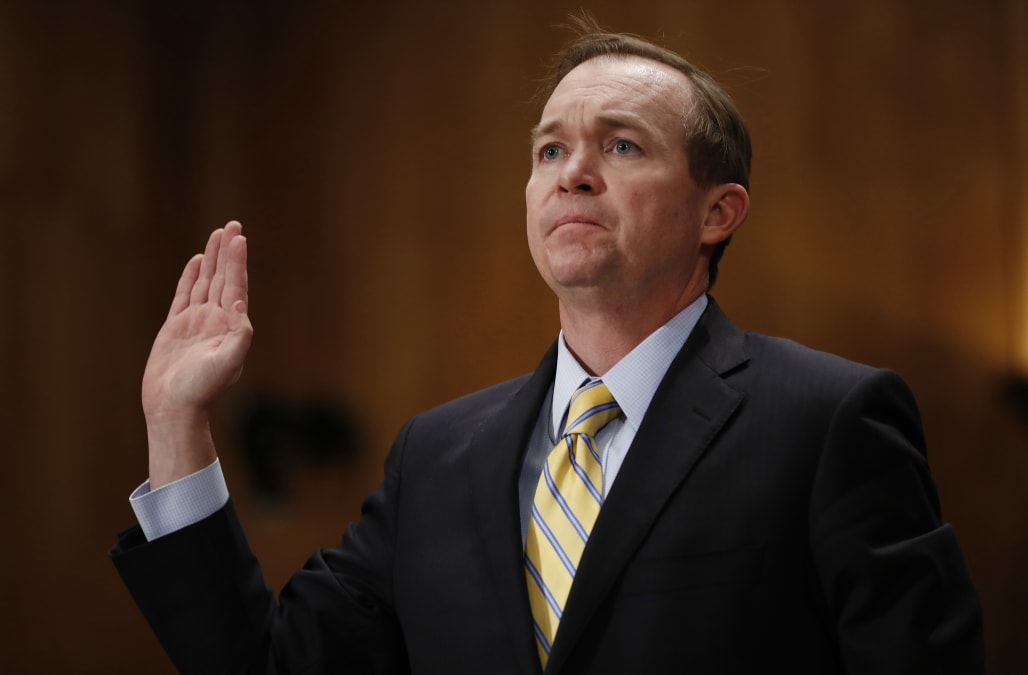 Former Rep. Mick Mulvaney (R-SC), who was narrowly confirmed by the Senate on Thursday as the new White House budget director, has the unenviable task of trying to reconcile his career as a fiery deficit hawk with President Trump's unrestrained calls for new spending and tax cuts.

Trump has promised an historic buildup of the military and nuclear arsenal, construction of a wall along the southern border, a $1 trillion infrastructure program, safeguarding of Social Security and Medicare, and tax cuts for businesses and individuals that could add at least $7 trillion to the long-term debt. The president has said that a strong military is "more important" than a balanced budget.

By contrast, Mulvaney, the one-time Tea Party champion, has been an ardent foe of defense spending and has repeatedly called for major savings in entitlement programs, including Social Security. The South Carolina Republican preferred a government shutdown to voting to raise the debt ceiling, and he only favors major tax cuts if they are offset by budget cuts or other savings.

Pressed during his Senate confirmation hearing last month to explain how he intends to advocate for Trump's fiscal policies while preserving his principles and integrity, the 49-year-old Mulvaney replied, "My job is to be completely and brutally honest with him."

RELATED: Take a look at Trump's cabinet's net worth:

The Office of Management and Budget is the nexus of any administration's spending and tax revenue policy making, and it has enormous influence over the operations of the federal bureaucracy and regulatory review.

"First of all, he's either going to be the most influential member of the cabinet or the next one out the door," said Stan Collender, a Washington budget expert and blogger. "A lot of what Trump wants to do and the House and Senate Republicans want to do on taxes and spending are things he has fought against."

As he hits the ground running this week after barely winning Senate confirmation by a margin of 51 to 49, here are five of Mulvaney's biggest challenges as Trump's new budget chief:

Defense – Mulvaney has long complained about wasteful defense spending, but he better get over it. Sen. John McCain (R-AZ), chair of the Senate Armed Services Committee, was the only Republican to vote against Mulvaney's nomination yesterday. McCain declared that it would be "irresponsible to place the future of the defense budget" in Mulvaney's hands.

Since winning the election, Trump has promised a major build-up of all branches of the military and a "state of the art" missile defense system. Trump and many Republican leaders are eager to lift a spending cap on defense by $30 billion to $40 billion. Mulvaney has reluctantly indicated he will play ball with Trump and McCain to boost defense spending but only so long as it's offset with cuts across the federal budget, according to Politico.

Related: Why Health Care Spending Could Rise Even Faster in the Next 10 Years

Entitlement Spending – Trump campaigned on a pledge to protect Social Security and Medicare from cuts – a promise that is regularly highlighted in a TV ad sponsored by the AARP, the nation's premier advocate for seniors. But during his confirmation hearings, Mulvaney said he remains in favor of raising the retirement age for Social Security to 70 and reiterated his commitment to achieving other savings in Medicare.

There's no telling how this year's looming battle over health care policy –- including the Republicans effort to repeal and replace Obamacare –- will play out. Yet House Speaker Paul Ryan (R-WI) and other conservative policy makers continue to harbor an intense interest in tossing Social Security and Medicare into the mix.

The Budget – Newly elected presidents rarely submit a formal budget to Congress during their first few months in office, but Trump and Mulvaney will have to face some thorny spending issues for the current fiscal year that were left over by the last Congress.

That has given Trump and his advisers time to weigh in on unresolved spending issues, including finding more money for defense and cutting more deeply into domestic programs backed by Democrats, including Planned Parenthood.

Related: The IRS Has Just Made Obamacare's Individual Mandate Optional

Debt Ceiling – With the national debt currently at $19.97 trillion and rising, Trump and GOP leaders will soon find themselves stuck with the thankless task of raising the legal debt ceiling for borrowing by the Treasury. The party in power must always assume responsibility for raising the debt ceiling, giving the minority the opportunity to blame the majority for profligate spending. The Treasury will officially begin to bump up against its borrowing limits March 16, leaving the administration with only a few months to act before facing a fiscal crisis and a possible government shutdown.

As a freshman member of Congress, Mulvaney challenged the need to raise the debt ceiling and even now suggests that the federal government should consider prioritizing Treasury payments, rather than paying all its debts. But that cavalier attitude could get Mulvaney into trouble. And the new Treasury secretary, Steven Mnuchin, declared recently that "there should be no uncertainty that we are paying the bills.

Obamacare Repeal and Tax Cuts – Passing just one budget resolution in a year can be a heavy lift for the party in power; passing two in the same calendar year may be unprecedented. Yet congressional Republican leaders and the new Trump administration are counting on adoption of fiscal 2017 and 2018 resolutions under fast-track rules as the vehicles for dismantling Obamacare and passing major tax cut legislation.

Both of these resolutions are highly complex documents that will invariably be laden with highly controversial health and tax policies requiring careful review by the OMB, as well as the Treasury, the Department of Health and Human Services, the Internal Revenue Service and key White House advisers. If Mulvaney and Trump have a falling out over health care and entitlement policy, this is where the sparks could really fly.

More from The Fiscal Times:
The Government Is Holding Millions in Unclaimed Retirement Money
Drug Prices Are Soaring: Here's Why You May Not Get the Meds You Need
The Best and Worst States for Taxes in 2017