It would be a disaster if automakers do what Trump wants 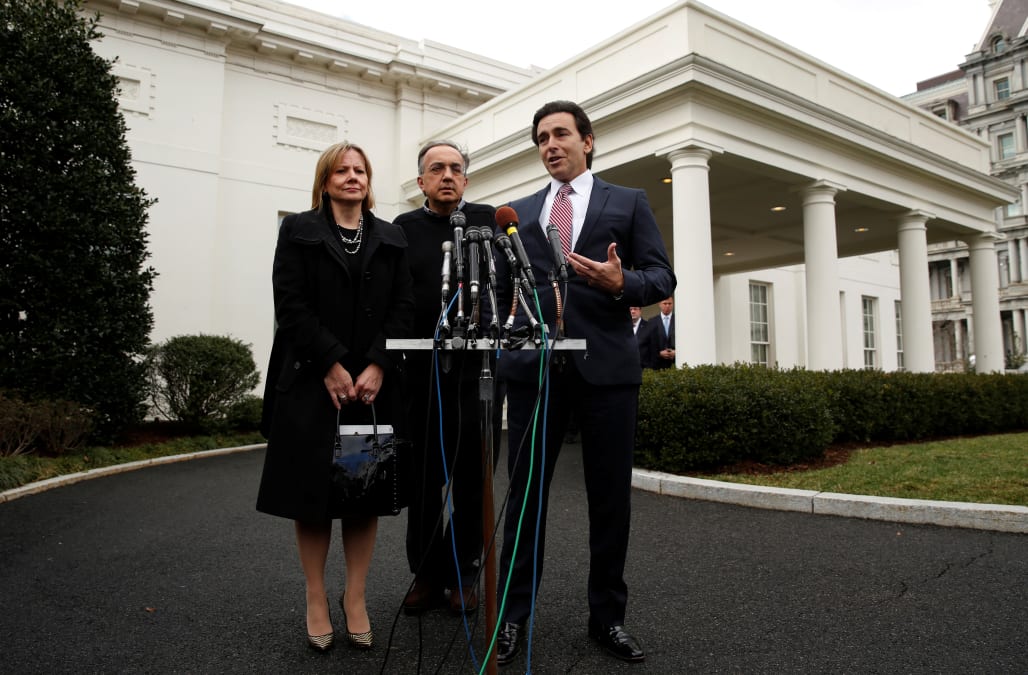 Prior to the meeting, he listed his demands on Twitter.

"Will be meeting at 9:00 with top automobile executives concerning jobs in America," he wrote (not using the POTUS Twitter account). "I want new plants to be built here for cars sold here!"

Of course, most cars and trucks sold in the US are already built in the US. The so-called "Big Three" are major employers in the Upper Midwest, a key reason why GM and Chrysler were bailed out by the federal government in 2009.

Beyond the Detroit carmakers, the Japanese and Germans auto companies have been building vehicles at US factories in the South for decades, in non-union "right to work" states.

We don't yet know all of the details about what Trump actually told the Big Three CEOs, but his objective seems straightforward: build more plants and hire more workers.

This, however, is not something that the carmakers will be willing to do in the current market.

"We had a very constructive and wide-ranging discussion about how we can work together on policies that support a strong and competitive economy and auto industry, one that supports the environment and safety," Barra said.

"The US is our home market and we are eager to come together to reinvigorate US manufacturing. We all want a vibrant US manufacturing base that is competitive globally and that grows jobs. It's good for our employees, our dealers, our suppliers and our customers."

And Marchionne said: "I appreciate the President's focus on making the US a great place to do business. We look forward to working with President Trump and members of Congress to strengthen American manufacturing."

A record 17.55 million new vehicles were sold in the US in 2016. We've now had two consecutive years in which the sales record of 2000 was topped. The boom has been great for Detroit's bottom line: cheap gas and easy credit has meant that many of the vehicles sold have been profitable trucks and SUVs.

The US auto industry is delighted with Trump, although executives are wary about his proposed border tax, given that GM, Ford, and FCA all have operations in Mexico (and have for decades). The problem is with Trump's capital-expenditure-and-hiring demands. The automakers would have stood a decent chance of getting a rollback on regulations with any Republican President, but the protectionism Trump is pushing for runs counter to their businesses.

The situation is complicated — and actually made more complex because sales have been so hot in the US.

Globally, the auto industry has an excess-manufacturing problem, something that FCA's outspoken CEO, Sergio Marchionne, has often highlighted.

This really isn't the case in the US. Automakers are dead-set against adding capacity here with the market running so far above what's known as the "replacement rate" of sales — 15 million annually or thereabouts — and instead are maximizing their capacity utilization so they won't be stuck with unused capacity and layoffs when the downturn inevitably arrives.

Cracks in the boom

Cracks have already appeared in the boom, and Trump has assailed the automakers for their efforts to address them.

Specifically, Ford, GM, and Chrysler want to shift low-profit small-car production to Mexico, where lower wages will enable them to continue to build these vehicles for the US and other markets. Demand in the US is collapsing for passenger cars, so automakers want to use their US factories to build trucks and SUVs instead of smaller sedans. In some cases, demand has ebbed to such a degree that layoffs are inevitable; GM just laid off 1,200 workers at its Lordstown, Ohio plant, which is where the Chevy Cruze compact sedan is assembled. Lordstown is on the I-80 corridor, right in the heart of Trump country.

In other cases, automakers are trimming their production because inventories have gotten too big. In fact, some dealers were sitting with more than a three month supply of cars and trucks in late 2016. This left them with only two months left in the year to get rid these vehicles off their lot.

Beyond all of this, automakers are under pressure to invest not in unnecessary capacity, but in R&D that will enable them to attack the growing autonomous-driving, car-sharing/ride-hailing, and electric-vehicle opportunities. None of those really involve hiring additional factory workers.

The dangerous effects of Trumponomics

The automakers genuinely want their big corporate tax cut and a rollback on fuel-economy standards so that they can make gestures toward Trump's demands in the form of some marginal hiring and some investment in plant retooling. To a degree, Ford did this during the transition when it canceled plans to build a new Mexican plant for small-car production and instead invested $700 million in a Michigan factory to build hybrids.

Car companies could also see if Trumponomics will juice the economy in 2017, keeping auto sales elevated.

But artificially elevated sales are a throwback to the undisciplined ways of the pre-crisis industry. All the major players have learned their lessons. With their existing manufacturing footprints, major automakers can be quite profitable by the standards of the car business and sustain profitability in a US market that swoons to 11 million in annual sales.

If they give into Trump and start building new factories and hiring new workers in a peaked market, the capital will be wasted because the capacity will never be needed and the jobs will be perilous because they'll vanish in a downturn. For what it's worth, additional hiring by the big three automakers would bring on new United Auto Workers jobs, not something that's likely to sit well with Republicans in Congress.

Trump could contemplate something apocalyptic with US automaking and try to drive the Japanese and the Germans out so that US car companies could eventually grab that market share, but the result would be large-scale unemployment in the US South. It would also be a Trumpian version of authoritarian industrial dictating that even the more authoritarian countries of the world won't go near.

Trump could also recognize that Chinese automakers want to get into the US market and figure that they can bring the jobs and plants, effectively burning money to establish a foothold. But for a Chinese car company to carve out sales, it would have to take share from a US, Japanese, German, or South Korean automaker, in a US market.

The bottom line is that Trump needs jobs headlines right now. The auto industry could give him that by committing to "investment" at various levels, tied to the possibility of new factories and new jobs. But the factories will take a while to build, and the jobs won't really move the needle that much in reality in an economy that adds hundred of thousands of jobs each month.

But Trump also needs actual jobs, particularly in the auto-industry heartland. It's unlikely that the automakers will give him that — but if they do, they'll be playing a long game, with no intention of retaining those jobs when the market starts to slide.

Trump will probably endure a recession in the next four years. His demands of the US auto industry could only make it worse.

SEE ALSO: Trump's plan to jumpstart US manufacturing could backfire over a major flaw