How much it costs to be a pro cheerleader 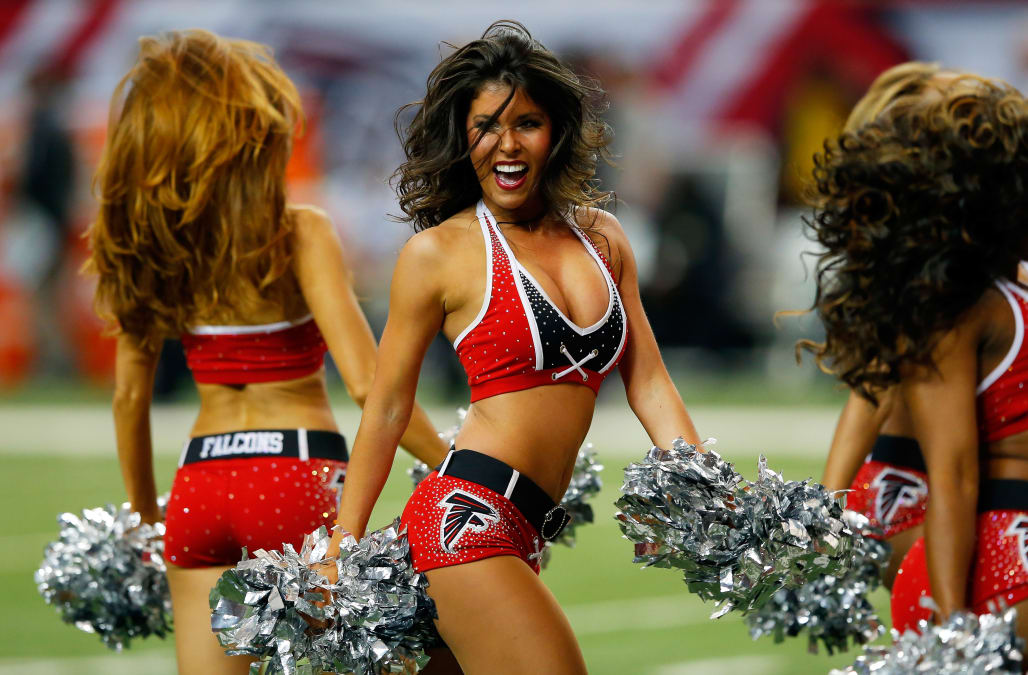 While it's well understood that professional cheerleading isn't a big moneymaker, those interested might be surprised to learn that rising to and maintaining pro-status generally requires out-of-pocket expenses -- making the career choice a bit less lucrative. But if you dream of one day cheering on the sidelines at an NBA or NFL game, this shouldn't stop you.

"Managing your expectations is a really important aspect," said former NFL cheerleader Tessa Shea Whitehead. "The second most important thing is that you're doing it because you love it. If you go into it with these high expectations because you're going to make a lot of money and marry a football player, none of that is true."

While Shea Whitehead considers herself lucky, having incurred very few personal expenses, she realizes that many professional cheerleaders do pay for everything from hair and makeup to spray tans. For example, former Philadelphia Eagles cheerleader Christina Thomas had a seemingly more typical path. Some services were provided to her, and others were left up to her.

If you're passionate about taking cheerleading to a professional level, here's a look at the expenses you might face.

Some cheerleaders join all-star teams or cheer at their high schools before going on to the pros. For others, dance paves the way.

"I had not cheered before," said Thomas. "I had a dance background -- mainly in ballet -- and I went to a performing arts high school, and a lot of the girls went on to perform with the [Philadelphia] 76ers and the Eagles."

The dance background both Thomas and Shea Whitehead share was their only training leading up to their professional cheerleading work. But dance classes aren't cheap. Shea Whitehead's parents recall spending around $6,000 dollars a year at her dance studio for classes and company expenses.

"I was part of a dance company for eight years, so that's around $48,000 dollars total," she said. "That includes costumes, travel and competitions."

Although Thomas' high school provided free dance classes, she took ballet classes at schools that currently charge around $2,000 to $5,000 per year. Luckily, some schools offer scholarships for those who can't afford the steep tuition.

"I also took summer programs every year from age 13 to 18, which currently cost around $3,000 to $5,000," she added. These costs didn't include other expenses, such as transportation. Her parents also invested quite a bit in shoes, leotards, tights, bobby pins, sweaters, skirts, leg warmers and more over the years.

Trying out to be a professional NBA or NFL cheerleader can be similar to applying for college -- you'll most likely have to pay an application or tryout fee.

She paid a modest fee of about $25 for the audition itself and more for proper attire. But the cost to audition could be higher or lower, depending on the teams. In its 2016 audition information guide, the Atlanta Falcons stated the application fee was $35, the Washington Redskins' auditions registration fee was $40 and the Chargers' fee was between $20 and $25.

Many aspiring cheerleaders also pay for tanning, manicures, hair and makeup for the audition. Some also opt for a preparatory class to get ready for the audition process. However, some of these classes aren't free and can range in price. The Falcons and Los Angeles Rams, for example, offered prep classes for about $40 each; the Patriots' optional workshop costs $125; and the Washington Redskins offered prep classes for $25 per class. But, by signing up for a prep class, some teams might waive the audition registration fee.

Check Out: Cheap Beauty Hacks Everyone Should Know

Finding appropriate audition-wear was a challenge for Thomas and her mom. "We went to a very risque store to find something that was appropriate to wear for this audition because they didn't want just a bra and shorts," she said. "It had to have something with flair and rhinestones, which I was not used to."

Luckily, Thomas said there are now more DIY options and online tutorials that can help you save money. In fact, the DIY options can add flare to a more affordable outfit you find in stores. Or, you can spice up shorts or a crop top you already own.

See: 35 Ways to Save Money on Clothes

If you go the more generic route for both your audition garb and rehearsal apparel, Thomas said you might end up paying around $30 for shorts and at least $60 for a top to match.

"There's one [audition] section where you have to wear a bikini," she said. "So if you want more glitz and glamour, you might have to shell out more money."

Given the hefty amount of practice and performing professional cheerleading requires, NFL and NBA cheerleaders tend to stay fit. That said, they might feel the need to sign up for a gym membership or hire a personal trainer to get into tip-top shape.

On average, gym memberships cost about $58 a month, according to research conducted by Statistic Brain in October 2016. If you also opt for a personal trainer, that could run you $50 to even $500 per hour. If you can't afford to go to a gym, there are plenty of fitness apps that can replace a membership.

While your team or college might provide free access to a gym, that's not always the case. But, you might pay less than the typical gym-goer. Thomas didn't need or opt for extra fitness services, but she said a gym membership discount was provided for her squad.

Once you've made the team -- congrats! -- bronzing your skin might be necessary. If you're lucky, your team might cover the costs to go tanning, like in Shea Whitehead's case.

Thomas found someone to spray on the darker hue for $30 to $40, which would last about a week. Afterward, she would switch to a self-tanner for longer-lasting maintenance. This is one of the only expenses Thomas regrets, however.

"I'm very pale, but wish I could have just embraced that," she said.

If you have paler skin and your franchise prefers bronze, spray tans will likely cost you at least $25 to $50 a pop. Going UV-style can cost around the same. Self-tanner you purchase at a drug or beauty supply store might cost you anywhere from $7 to $30 per product.

Making sure your locks are up to industry-par also continues throughout a professional cheerleader's career. But basketball and football games aren't the only times you'll need to appear salon chic.

"For any appearance and for any rehearsals, and when you showed up to a game, you were always representing your team," said Thomas. "So, you needed to be looking that way."

She opted for haircuts at least once a month to keep her hair healthy. She also got highlights, which brought the total up to $150 to $200. Hair extensions aren't a requirement, but some cheerleaders get them. In Thomas' case, they were recommended.

"I auditioned three years in a row and only made it one year," she said. "After the first year, they suggested I get hair extensions for the next year, which was very expensive."

She did get the extensions, but didn't end up making the cut that year, making the thicker, longer tresses a needless expense. Depending on the style, type and technique used for extensions, you could spend under $100 or up to thousands of dollars -- plus additional fees for touch-ups and maintenance. For a cheaper option, go for clip-in extensions you can put in yourself.

Whether you do your own makeup or hire a professional, it comes at a cost. Makeup services might be provided at games -- the case for Shea Whitehead and Thomas -- but like hair, your face is expected to match up with your team's image when you represent it.

Having your makeup professionally done, whether for your audition or a team appearance, could cost you around $50 or up to hundreds of dollars. Some department stores and makeup stores, such as Sephora, provide full makeup with a determined minimum purchase.

Buying and applying your own makeup can save you quite a bit of money, though. Sure, about 59 percent of women spend over $150 on makeup each year, according to research conducted by POPSUGAR in 2014. But when compared to routine professional services, that's a lot less in the long run -- even if you splurge for a few glam extras.

As a professional cheerleader, your skin and nails are also expected to be picture perfect. Thomas didn't need or opt for any special facial services, but she did splurge for the nail salon.

"You needed to have your nails done," she said. "I'm sure you were okay with a simple manicure, but I was really into the acrylic nails."

Manicures cost around $10 to $15 for a simple trim, buff and polish. But that price can be closer to $45 at an upscale salon. If you add gels or acrylics, you might pay $25 to $85 per set, plus smaller fees for fill-ins and upkeep.

Facials also vary, depending on where you seek the service. A standard treatment that lasts 60 to 90 minutes may cost $75 to $100 in a smaller town, or up to several hundred dollars in a trendy area or spa.

If you have issues such as acne-prone skin, you may need to see a dermatologist, which also comes at a cost.

While there's a great deal of pressure on cheerleaders to look a particular way, the industry is becoming more accepting and inclusive than it used to be, said Thomas.

"I feel like it's changing for the better," she said, adding that one of the requirements when she cheered was longer hair. "I recently went to a game and saw girls who had Afros and pixie cuts -- and looked incredible."

To find out what your dream team requires, do your research ahead of time. Ask those who do the hiring, or talk to former or current cheerleaders. Then, figure out if this career choice fits within your financial plan.

If you decide that becoming a professional cheerleader is something you want to do, save money by going for DIY options. Create your own audition-wear with clothes you already own. And, go for basic manicures and natural nails versus acrylics. If it all works out, you could have a blast while making some money in the process.

"For me, it was a positive," said Shea Whitehead. "It makes you feel like a valued member of the franchise."