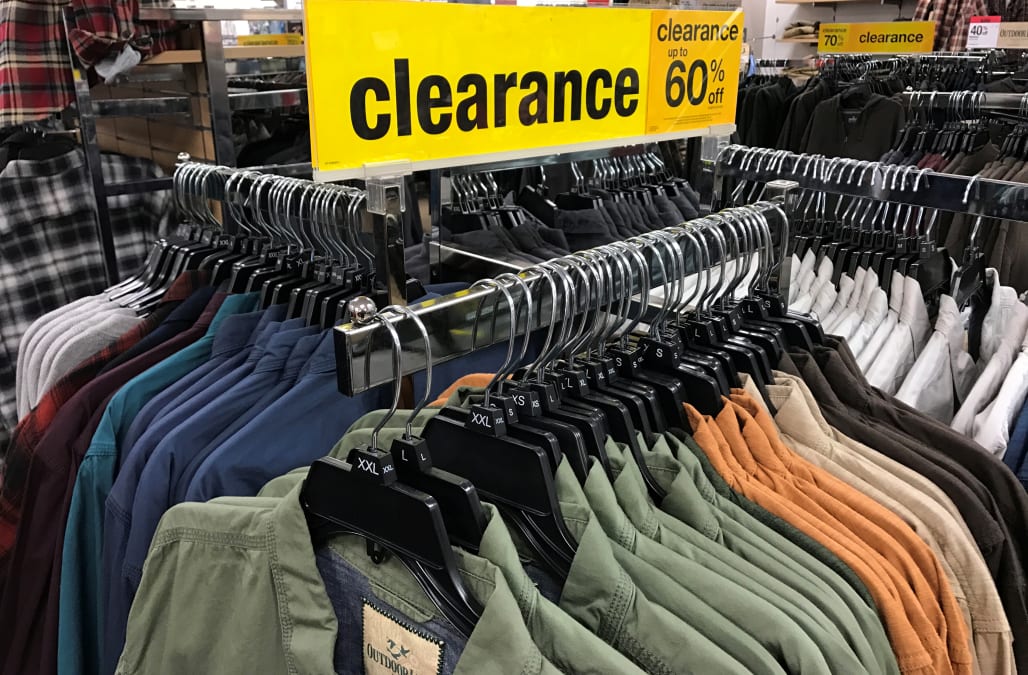 Macy's, Sears, Target, Kohl's, and JCPenney are among the many companies that have reported lackluster sales during the critical holiday period.

In the wake of the disappointing season, Macy's and Sears are now collectively closing more than 200 stores, and analysts say JCPenney could shut down as many as 300 stores within the next couple years.

Target has slashed its fourth-quarter sales and earnings outlook and the mall-based retailer The Limited just shut down all 200 of its stores.

Department stores, which were hit hard by plunging shopper traffic and sales declines, are now on pace for "the worst results since the recession," according to Morgan Stanley analysts.

The apparel retailer has had a difficult few years.

J. Crew announced in November that sales at stores open at least a year dropped 8%, following a decrease of 11% in the same period last year.

Now, the company is attempting to change things up. In November, the retailer axed its popular bridal line. A month earlier, J. Crew launched an athleisure line with New Balance — a collection that Business Insider felt failed to live up to competitors' standards.

Sears' sales continued to plunge in 2016. In the most recent quarter, revenue fell 13% to $5 billion, with losses widening to $748 million from $454 million in the third quarter last year.

The retailer is closing hundreds of stores, with more than 170 Sears and Kmart locations shuttering this year.

And, things are only getting worse — many analysts say 2017 is likely the year that Sears goes bankrupt.

In August, Macy's revealed plans to close down 100 stores in early 2017 as the retailer looks for a solution to slowing sales and the growth of online competitors.

In November, the retailer reported that net income for the third quarter fell by 87% to $15 million, following a 46% decline over the same period last year. Same-store sales at stores open at least a year fell 3.3%.

"These figures show a company grappling with what looks like terminal decline," Neil Saunders, CEO of the consulting firm Conlumino, wrote in a note to clients.

In a UBS report released in December, only 20% of people surveyed said that Hugo Boss was a cool and fashionable brand, compared to nearly 40% a year ago.

Being off-trend is seriously impacting sales. In November, the company adjusted its sales prediction for 2016, saying sales could decline up to 3% in the year.

The handbag maker stopped selling merch at more than 250 department stores in 2016 in an effort to regain its premium, luxury status.

However, the move hasn't paid off yet — in November, when reporting the company's the most recent quarter, Coach said it had its slowest growth in four quarters.

A decade after it was founded by then 22-year-old Sophia Amoruso in 2006, Nasty Gal filed for bankruptcy in November.

"Filing for bankruptcy is actually the most responsible decision for the business," Amoruso said at an event in Sydney, Australia when the news broke, the Independent reported.

The trendy fashion retailer had been through some tumultuous times in recent years. Amoruso stepped down as CEO in 2015. In her absence, the retailer laid off employees and former workers complained of a toxic environment.

It looks like Nasty Gal could get a fresh start in 2017. On Wednesday, British online fast-fashion retailer Boohoo.com announced it was bidding $20 million for Nasty Gal's brand and customer list.

In December, Lands' End reported a 14.3% drop in same-store sales in the third quarter, with a 49% drop in apparel sales. That marked the ninth consecutive quarter of declining sales for the company.

To make matters worse, Lands' End has also been dealing with problems in its executive suite.

In September, Federica Marchionni left her position as CEO. According to the Wall Street Journal, her departure was triggered by employees' disagreements with Marchionni's more high-fashion approach to the brand as well as the limited time she spent in the office — just one week every month.

As teens' interest in the brand waned, Aeropostale filed for Chapter 11 bankruptcy in May.

After declaring bankruptcy, the retailer announced it would close 154 stores in the US and Canada.

"Back in the day, all of the cool kids had trendy brand names plastered across the front (or back) of their clothing. The trend has changed, and style today, perhaps encouraged by social media, embraces individualism and uniqueness," wrote Nicholas Rossolillo in finance publication The Motley Fool. "Online ordering and heavy discounting have also taken a toll on the industry, especially mall-based retailers. Aeropostale simply hasn't been able to adapt."

Kate Spade's sales have suffered in 2016 as tourists' visits declined and discounting grew more popular, making it harder to sell items at full-price.

Now, the company is reportedly working with investment banks on a possible sale, the Wall Street Journal reported Wednesday.

The news comes six weeks after New York-based hedge fund Caerus Investors sent a letter to Kate Spade pushing the retailer's board to consider a sale.

It's not like people weren't spending money over the holidays.

In fact, overall holiday spending rose 4% in the US to $658.3 billion, compared to last year, according to the NRF. That number includes$122.9 billion in online sales, which jumped 12.6% over last year.

This highlights a big problem in retail: many department stores and big-box retailers are still primarily reliant on in-store sales for revenue, when all the holiday spending growth is happening online.

Take Target for example: in the months of November and December, Target's same-store sales fell 3%, while online sales soared more than 30%. But Target's ecommerce sales are still only a fraction of its overall sales, so the growth online couldn't offset the losses in stores. As a result, overall comparable sales — including online and in stores — fell 1.7%.

The months of November and December account for as much as 30% of retailers' annual sales, according to the National Retail Federation.

That's why so many retailers are now announcing store closures in the wake of the holiday period. They need to cut their losses on unprofitable stores — or even marginally profitable stores — and invest more in growing their ecommerce businesses.

"Long lead times for most make it difficult to read and react to sales trends in season and causes these retailers to be more susceptible to fashion mistakes," the analysts wrote. "Merchandise and brand differentiation is tough to come by and is becoming increasingly difficult to defend share against Amazon."

Off-price retailers like TJ Maxx offer an added threat with their deep discounts that undercut Macy's, Target, and others on price.

"As millennials come to comprise the largest segment of the population, we expect these 'original bargain hunters,' forged by coming of age during the Great Recession, to remain value-focused, driving future apparel pricing pressure," analysts wrote.

The result of these pressures will drastically alter the retail landscape over the next several years. Physical stores won't completely disappear, but they will continue to decline in number as retailers race to catch up to Amazon and adapt to customers' changing shopping habits.

NOW WATCH: Sears is closing 150 stores — here's where they will shut down