How to prepare your money for a Trump presidency 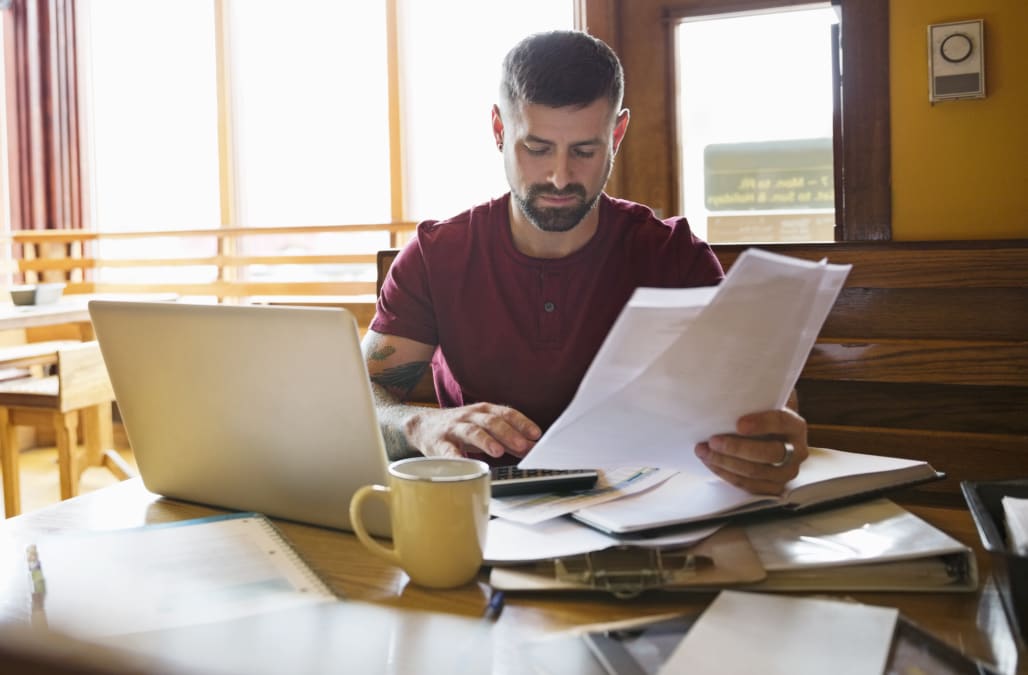 After a volatile election, President-elect Donald Trump will be inaugurated as the 45th president of the United States on Jan. 20. Consumers are divided over what this means for their finances — some are eager to bet big on American stocks, while others are considering hiding their cash under a mattress. To help you prepare for the changes ahead, we spoke with a handful of financial experts who shared their thoughts on investing with caution.

"We tend to invest based on emotion, and some people are really high on Trump, and some people are scared to death of Trump," said Allan Roth, founder of Wealth Logic, a financial planning firm in Colorado Springs, Colorado. "When Obama was elected, a lot of people were like, 'We're going to print money, U.S. stocks are horrible, put everything in gold, avoid the dollar, avoid the stock market' — and the absolute opposite happened. I'm a believer in capitalism, and capitalism trumps dysfunctional politics. And dysfunctional politics aren't new."

Roth won't be the only financial expert keeping a grounded outlook. Jude Boudreaux, a financial planner based in New Orleans, said the main question around investing should be your goals and time horizon, not what we expect to happen in the next four years. "The biggest message I have is not to overreact," he said. "The next 12 months, from a market standpoint, are not going to be the difference between you being able to retire successfully or not."

"My advice to consumers is boring," said Michael Falk, CFA and partner with Focus Consulting in Long Grove, Illinois. "Spend less than you earn, keep your focus on your goals, which are likely more than four years away, and never stop learning." (You can see how your financial decisions are affecting your credit by viewing your free credit report snapshot, with updates every two weeks, on Credit.com.)

RELATED: 6 ways you're wasting your money:

The U.S. spends more on student education each year than most other countries, according to a 2013 report by the Organisation for Economic Co-operation and Development. Yet despite spending more, American students don’t perform as well on test scores.

Furthermore, college tuition continues to climb in the U.S. and family income hasn’t kept up, according to a recent report from The College Board.

Find Out: Student Loan Debt: Is College Tuition Worth the Cost?

If you really don’t want to waste money, consider community college, said Timothy Wiedman, a retired associate professor of management and human resources at Doane University in Crete, Neb. The average cost of in-state tuition and fees at a community college is $3,520.

“Completing a two-year transfer program locally while living at home — and then transferring to a more expensive four-year school to complete a bachelor degree — will often save a great deal of money,” he said. And the coursework will be virtually identical, he added.

Diapers are a messy business, and an expensive one for parents. According to Babies R Us, a baby will need up to 3,360 diapers in the first year of life. If you spend an average of 25 cents per disposable diaper, that is $840 for the first year.

Diapers are a necessity when welcoming a new life into the world, but don’t use them longer than required. “People waste hundreds, if not thousands, of dollars by believing that children need to wait until certain things happen before they can potty-train their children,” said Michelle Swaney, owner of The Potty School, where she teaches people how to toilet-train their children ages 18 months and up.

In fact, the U.S. lags in toilet-training when compared to some other parts of the world. For instance, Vietnamese babies are usually out of diapers by 9 months of age, reports NPR. In the U.S., the average age for a child to be toilet-trained is somewhere between 24 and 30 months, which is a conservative estimate, according to Swaney.

America wasn’t always so bad at teaching the bathroom habit. In 1957, 92 percent of children were toilet-trained by the age of 18 months, according The New York Times.

According to the book “Baby Bargains” by Denise Fields, a baby will cost your household an average of $7,000 in the first year alone. With a price tag like that, it’s important to spend money wisely.

So, stick to buying only what is necessary. For instance, do you really need to purchase a Playtex Baby Diaper Genie Complete Diaper Pail at Target for $34.99? Or could you just simply recycle grocery bags to bag up and quickly dispose of dirty diapers?

The same holds true for a bottle warmer. You can warm up a bottle by simply using warm water. And do you really need a specialty baby-food maker, when a regular blender will do the trick?

We all have dreams, but spending cash to become a millionaire shouldn’t be one of them. Americans spent $73.8 billion on lottery tickets in fiscal year 2015, according to the North American Association of State and Provincial Lotteries. A quick look at the Powerball website tells you the odds of winning the lottery grand prize are 1 in 292,201,338.

Even if you win the lottery, you have to wait to be paid. You also fork over taxes, which can drastically reduce your winnings. Some people believe only the poor play the lottery religiously, but a study in Virginia found that 55 percent of people who play at least once a month have an income of $55,000 or more.

Instead of wasting money on lottery long shots, spend the money on something that’s attainable — such as a dinner out. At least spending in that manner allows you to enjoy yourself.

5. Failing to Shop for Bargains

Never shop without scoping out discounts and deals first. Fail to do so, and it’s basically like leaving free money on the table — which, of course, is never the smartest idea.

“Although today’s online shoppers are very savvy, many do not take advantage of free money, such as cash back,” said Brent Shelton, an online-shopping expert at FatWallet. For example, you can earn cash back by shopping through sites such as Ebates, and many credit cards offer cash-back rewards on purchases, he said.

Savings add up when you take advantage of incentives such as these. Missing such opportunities can leave you feeling cash-strapped sooner. In addition to Ebates, other sites that offer promotions such as cash-back deals include:

Don’t forget to check out individual store saving opportunities too. These include the Cartwheel app at Target and Yes2You Rewards at Kohl’s. Check details of your credit or debit card for other saving and earning opportunities.

Related: Times It’s OK to Buy Used Instead of New

Your wedding day is supposed to be the best day of your life, so spend a fortune, right? In fact, Americans spend a ton to say “I do” — a record-amount average of $32,641 in 2015, according to the latest survey from The Knot.

Europeans on the other hand, are much more conservative with wedding expenses, spending an average $5,495 on nuptials, according to a survey by ING, the Dutch-based multinational and financial services firm. Europeans would rather spend money on a house than a wedding, the report found. That does make more sense financially than spending cash on an occasion that’s here today and gone tomorrow.

So, how can you save thousands on your wedding? Think smaller — reduce the guest list, buy fewer flowers and settle for a smaller diamond.

Many investors are rightly concerned about inflation, said Robert Dowling, a financial planner with Modera Wealth Management in Westwood, New Jersey. Employment is up, and Fed Chair Janet Yellen recently said it "makes sense" for the U.S. central bank to gradually raise interest rates. For these reasons, he said investors may want to give themselves exposure to Treasury Inflation-Protection Securities, or TIPS, which provide a hedge against inflation, as well as commodities. "I would never suggest selling everything and buying these two different asset classes," he said, but if investors have exposure to these, it could benefit their portfolio when inflation takes hold.

Another option for concerned investors is adding more global exposure, Dowling said. Again, you'll want to broadly diversify, not concentrating too much on one country or type of investment, and avoid currency risks by choosing a quality mutual fund with help from an expert. "There is a portion of exposure we always like to have to emerging markets — small economies and small countries offer lots of growth (and volatility)," Boudreaux said. Investing no more than 5% "has always helped us."

When betting on emerging and developed markets — which are all available in inexpensive index funds — "don't pick stocks just to pick them," advised William Bernstein, author of The Investor's Manifesto. "The transaction costs will eat you alive." Keep your risk tolerance in mind and try not to overestimate it. "If you think you can [tolerate more risk], maybe you want to tamp it down," he said. "Once every 10 years you get a real financial crisis. You want to have an allocation you can live with when that does happen — and that's not an if, that's a when."

"Because I think the potential impacts are so opaque," Falk said, referring to the Trump presidency, "I lean toward avoiding leverage and major directional bets, and maintaining some dry powder (cash) or quick access to capital."

Dowling agreed, suggesting consumers shore up at least two years' worth of living expenses, which can be stashed in a CD or money market account. For retirees, having the cash to draw from while they work to replenish their lagging portfolio — a popular strategy known as cash-flow management — can be invaluable. For young professionals, it can help to have those savings on hand in case of emergency. "Pay yourself first, fund your Roth IRA and build good spending habits," Boudreaux advised. "The spending habits you develop in your 20s and 30s will have a much greater impact on your financial future than what the market does in the next two to four years."

More from Credit.com:
Are You Financially Ready for Retirement?
What Is a Good Credit Score?
Retrain Your Brain to Cut Debt and Build Wealth