She Picks Up Pennies 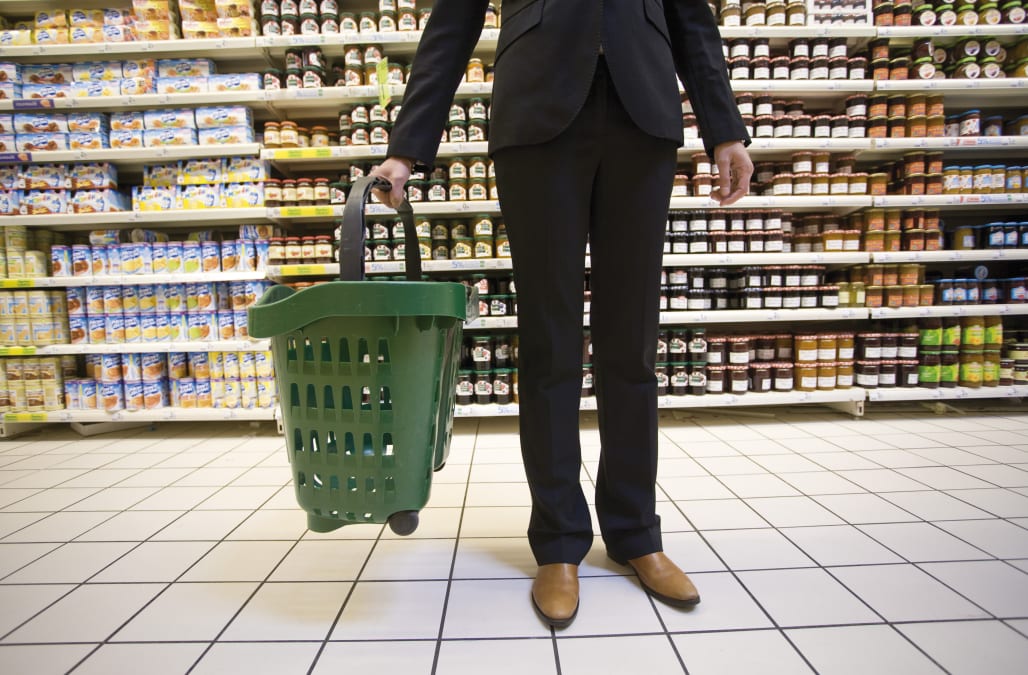 The second month of my pregnancy was, hands down, the most spendy month of my frugal life. While I don't think it was quite on par with my 200-pairs of-shoes existence, it was exorbitant by every other month, especially when it came to our grocery bill. Of course, I understood that when there was a third person at the dinner table, our mealtime expenses would go up. What I didn't realize, though, was how much that pint-sized nugget of bliss was going to mess with our meals before it even got to properly enjoy refuse to eat one. 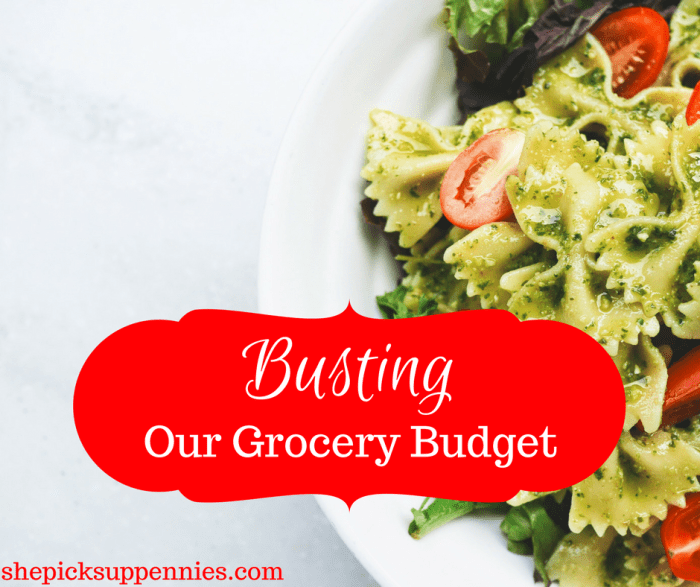 It Started With Chicken

Right before we found out I was pregnant, I was doing my usual Penny thing in the kitchen every night. I'd race home after tutoring and try to get dinner on the table before Mr. P finished coaching. I'm not a gourmet by any stretch of the imagination. In fact, if you've followed me on Twitter long enough, you probably remember The Great Bag Clip Debacle of 2016. Basically, a magnetic bag clip got stuck to the bottom of a baking sheet, and I didn't notice until my oven was full of orange plastic goo...and every toxin known to man. Mr. P, brave soul that he is, offered to eat that meal anyway. Me? Personally, I was ready to throw out the oven.

So, I'm cooking away in the kitchen. And since no 30-going-on-90-year-old should have to wait until 7:30 to eat, I had a little sample. My eyes bugged out of my head. Did I miss the expiration date? Did I not get the chicken in the fridge fast enough? Did my discount grocery store finally fail me? I wasn't sure how, but I knew without a doubt, that I was going to poison my husband if I fed him the rancid chicken. Down the disposal it went. That was night one of frozen pizza. On a Tuesday of all things.

Then It Was Everything

Fast forward to that Friday. Mr. P burst through the door early enough to actually watch me shake part of the Crock Pot into the sink. He convinced me to let him have a taste before I tossed the rest of that night's dinner. Turns out, three nights in a row is the line in the sand when it comes to frozen pizza. Mr. Stomach of Steel thought the Crock Pot stinkfest was delicious. I had to light a candle and go upstairs. Just the smell was too much.

On a normal month, our grocery bill is victoriously low, clocking in around $200. Then I got pregnant. In one week, we were well over $100, not only because I threw out most of our meals but because my taste buds changed so fast, I'd pack a lunch in the morning and have to run out to the store by lunch time. During one stage, I was subsisting entirely on string cheese and Saltines pretty effectively until my cheese started tasting like soap. (Thanks, Mom. Apparently, there are some things your taste buds never forget.) To say food got expensive fast is an understatement.

When things started to get really rocky, I stopped buying fresh meat and switched to frozen items. I know, I know. Not only does it have the nutritional value of styrofoam, but it's so expensive. To make matters worse, the produce section suddenly started smelling the cacophony of Bath & Body Works. I couldn't scoot past the deli counter fast enough. Once, I pushed my cart down the aisle of fresh spices only to come out in front of the fish counter. Luckily, my cart was empty because I had to grab my purse and run for the exit.* Basically, I think Mr. P has resigned himself to the fact that I was going to bring home the equivalent of magic beans for dinner instead of actual groceries.

*To those of you who have never experienced the joy of growing a human or living with someone who has, I assure you that this is not some hyperbolic reenactment of the B-list sitcom that it sounds like. Life gets crazy, for real.

So let him grocery shop, you say. Ah, yes, wise one. You are right and we got there eventually. But here's what you forget. I'm a proud son of a gun with an affinity for our $200 budget. Not only did I believe it to be unreasonable to ask someone who works twelve hour days to chase sales at multiple grocery stores, but meals are one way I contribute to our relationship. It took me a long while to realize temporarily waving a white napkin didn't mean that I was failing in our finances or our marriage. I will eventually regain my grocery budget crown. One day.

Note: I write this post filled with more love than I knew I could feel. There's that B-list sitcom again. Shoot, someone tell the Hallmark Channel I'm ready for my close up. Every good day and every bad day is a blessing. But in the spirit of full disclosure, I thought I'd share my budget fails with you.

The post Busting our grocery budget was first shown on She Picks Up Pennies.

More from She Picks Up Pennies
A Time for More Shoes
My Approach to Group Gifts at Work
Our 2017 Budget: The Opposite of Frugal?

Related: Save your money and your diet

Best Diets for Every Budget
Named U.S. News and World Report's best overall diet for four years in a row, this diet is definitely worth investigating. The DASH Diet integrates whole grain foods, fruits, vegetables, low- or non-fat dairy and fish or poultry, while limiting high-fat foods, salt and red meat. While fresh fruits and vegetable will cost you, cutting most red meat from you diet will make this diet wallet-friendly.
While the Paleo diet (eating like our ancestors did) isn't usually thought to be a low-price option, there are some simple ways you can do it on the cheap. Paleo Diet Lifestyle recommends buying products like olive oil in bulk, choosing cheap cuts and buying bone-in meats and buying whole or canned fish.
Traditional Mediterranean diets are proven to be incredible for your health! Even better, according to LearnVest, if you choose an inexpensive olive oil and stay away from the pricier varieties of products like tuna steak and chardonnay, you can expect to keep your bill within reason.
People often report feeling better, mentally and physically, after giving up gluten. This diet can be affordable if you follow one rule: eat foods that are naturally free of gluten. Products made specifically for gluten-free diets are often pricey. Opt for frozen or in-season fruits and veggies to keep produce prices low.
LearnVest calls the vegan diet "a steal" if done smartly. Be sure to cook for yourself rather than buy expensive prepared vegan cuisine. You can also find tofu for just half the price of ground beef per pound.

The Atkins diet helps dieters lose weight by cutting carbs from their diets. To make this protein-rich diet budget-friendly, try underrated cuts such as chuck and sirloin, always buy whole chickens and experiment with pork.

This government-endorsed diet centers around lowering cholesterol and begins with setting calorie goals. These calorie levels and limits on dietary cholesterol should curb overeating and help keep you within your budget. Cutting fatty meats can also help your bill.
The flexitarian diet closely resembles a vegetarian diet, but when a craving for meat strikes, they indulge. Flexitarians not only weigh 15 percent less than carnivores, but they also save money by spending less on pricey meat.
Number nine on U.S. News and World Report's best overall diets, the Ornish diet focuses on the overarching way you eat, exercise and live rather than on the specifics of your diet. Since the diet is so individualized, most of the time, it can work with any budget. Still, planning ahead and buying in bulk can keep costs down.
This trusted diet can help you shed between 6 and 10 pounds in two weeks and 1 to 2 pounds each week after until you reach your goal. The diet concept is split into two concepts, "Lose It" and "Live It." Dieters are discouraged from dining out during the "Lose It" stage and encouraged to cook at home, keeping your wallet happy.
Up Next