15 ways you're probably being unintentionally unprofessional 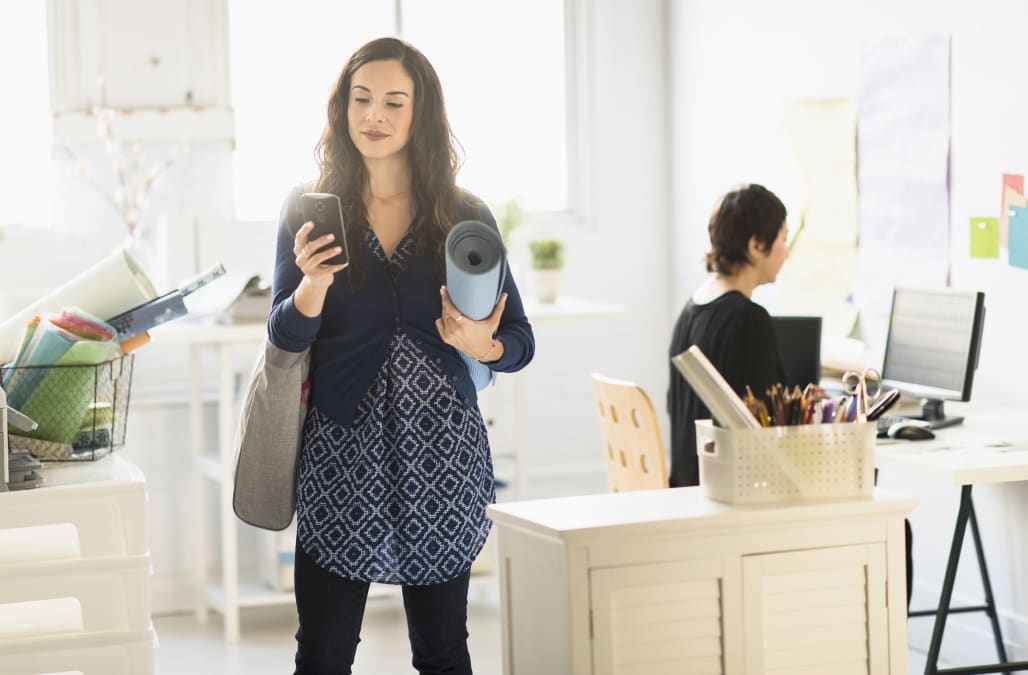 Most people like to think they bring their "A Game" to work every day. But do they really? Recent studies indicate that even though they make a genuine effort, many are prone to "illusory superiority"--the inaccurate belief that they are smarter and more competent than others. In addition to that, almost 50% of employees describe themselves as "not engaged" at work. Plus, half of American workers believe that working hard won't really help you get ahead.

Anyone who feels overworked, underappreciated, and stuck can lose focus or motivation. You might not even notice that your performance is slipping, or you may not stop to reflect on certain irritating, counterproductive behaviors. But others will notice if you let them down. With a new year ahead, it's a good time to evaluate your professionalism. Do any of the behaviors below sound painfully familiar?

1. You left someone hanging at a scheduled meeting.

I get that unexpected things come up: meetings run long, fires need putting out, kids get sick at daycare. But you have a smartphone and e-mail. If you have to miss our meeting, send me a quick note so I don't waste an hour drinking coffee alone.

More From Inc.com: The 9 Most Innovative Startups of 2016

2. You never followed up.

You and a new acquaintance had a nice chat, you promised to send along some information, and they passed you a business card before you said good-bye. Now, months later, it is buried at the bottom of your computer bag...along with any hopes you might have had of a business relationship.

3. You had just one more at the company happy hour.

At some workplaces, it's cool to party hard. But do you want to be identified as the star drinker? Even if everyone looks relaxed, someone's always counting, and they notice when you have one (or two or three) more than your coworkers.

4. You promised a favor you didn't really want to deliver.

Now someone is counting on you to deliver, wondering what's the hold up, and why you're acting annoyed with them. You said you were happy to help!

5. You weren't clear on the limits of the deal.

Now the client is confused, you're frustrated, and the strain is affecting the work. If there's a personal relationship there, it's probably twice as tense.

6. You let off a vocabulary stink bomb in church.

Hey, offices are not holy spaces. Plenty of us use salty language on a daily basis. But some occasions are formal (if not sacred), and absently using the F-word in your presentation for the CEO caused a lot of sour expressions.

7. You forgot to mention a few details.

Now the other person has to make decisions without all the facts. When they find out later that there was more to know, you have to choose between being called an idiot or a liar.

8. You left out the consequences.

Would that employee, friend, or child have made that poor choice if you'd mapped out what would happen? Maybe. But now they'll blame you as much as themselves.

9. You refused to use your smartphone as a phone.

Instead, you spent 3 hours texting back and forth on an issue that could have been resolved with 10 minutes of conversation. That's time and attention neither of us can get back. Thanks.

10. You substituted passion for facts.

Most people feel deeply about something, and it is fine to let that emotion come through. But when you present your side of a debate or an argument without using facts to back it up, you only end up convincing others that you're unreasonable.

11. You were continually the butt of your own jokes.

Self-deprecating humor can be effective. And it is safer than making fun of others. But you used it in the wrong moment and context in that meeting, and now the boss doubts your competence.

12. You worked too hard to fill the silence.

You remember how out of place you sometimes felt as a new prospect or employee, so you tried to fill in those awkward silences with playful banter. Nobody could hear themselves think, and you stink of verbal dysentery.

13. You took your coworker's Kool-aid.

That task was assigned to someone else. So you shouldn't have taken over, even if you did do an awesome job.

14. You flaunted your frantic schedule.

You rushed in late, breathless, exclaiming, "I've just been really busy!" Then you looked at the tired eyes of everyone in the room, and realized that humble bragging about your full schedule didn't win any admirers. Their silence seemed to say, "If you are so busy you can't stay on top of communication or honor your commitments, maybe it's time to re-evaluate."

15. You forgot to silence your phone.

So when you started playing Candy Crush at the back of the room, everyone heard it. They also knew your significant other was calling when it played "Let's Get it On."

RELATED: 25 things you should never say to your coworkers

25 things you should never say to your coworkers
You may have some strong feelings about the 2016 presidential election results, but the workplace isn't the best place to express all of them. And threatening to abandon ship doesn't exactly show you to be much of a team player.

"Don't rant and threaten to quit and move out of the country," Randall says. "Leave that to the celebrities."

Topics like politics, religion, ethnicity, and child-rearing will occasionally come up in the workplace, Randall says. But to negatively comment about any group is unwise and unprofessional, and it could get you in trouble for harassment.

Passionate discussions are to be expected in the workplace, but they should really be focused on work-related issues.

At the end of the day, you're at work to do work, and arguments about whose candidate was better can be distracting to both you and your coworkers. You're not doing your best work when you're more focused on defending your political stances.

Barbara Pachter, an etiquette expert and author of "The Essentials of Business Etiquette," says that drawing attention to your honesty at that moment can lead people to wonder, "Aren't you always honest with me?"

"Why are you saying you're a bother?" Pachter asks.

And if you were truly sorry about something you haven't done yet, why would you go ahead and do it anyway?

"Excuse me. Do you have a moment?" works much better, she says.

"This question is not only unprofessional, but awkward," Randall says. "Why do you want to know? Will you complain to your boss if you find it inequitable? Or will you speak to your boss on your coworker's behalf insisting they get a raise?"

Most of us have forgotten to bring cash or our wallet to work once or twice, and, Randall says, in this rare occasion it might be OK to ask your understanding coworker to borrow some money for lunch.

"But if your wallet is always in your 'other purse,' don't be surprised if you're excluded from future lunches," she says.

A compliment isn't against the law, Randall points out, but be selective about what you compliment.

Commenting about a coworker's physical appearance is considered unprofessional, she says — and worse, could be construed as sexual harassment.

This question rarely results in a positive outcome.

"If your coworker is not pregnant, you have insulted her," Oliver says. "If she is pregnant, she probably isn't ready to discuss it yet. Keep observations like this to yourself."

"Sharing this with your coworkers may cause them to instinctively distance themselves, knowing you will no longer be a part of the team," Randall says.

"They also might unintentionally leak the information to your supervisor, which could explain your lack of productivity and absences, resulting in a poor reference or an invitation to pick up your paycheck earlier than you expected," she says.

"Except for maybe your mom or spouse, no one really wants to see or hear about peculiar rashes or any nausea-inducing medical conditions," Randall says. "Limit your sharing to a cold or headache."

Saying "I think" is sometimes acceptable, but only if you truly are unsure.

"Using 'I think' can make you appear wishy-washy," Pachter says. When you know something, state it directly: "The meeting will be at 3 p.m."

You might as well say, "It should have been me."

"The professional response would be, 'Congratulations,'" Randall says.

Flaunting your luxurious lifestyle with your colleagues may set off a jealousy epidemic, Oliver says. In general, it's best to avoid bragging about how great your life is.
"This is the grown-up world — not everyone will be invited to everything," Randall says. "Besides, are you prepared for the answer?"
"If you mean 'get together,' then say so," Randall says. "In some circles, a 'hook-up' has a sexual connotation, which could land you in a sexual-harassment seminar."
You just admitted to stealing, a cause for termination and, at the very least, loss of trust, Randall says.

"Intimate details about your personal relationships can divulge unfavorable information about you," Randall says.

Sharing intimate details about your love life falls into the "too much information" category, she says, and "if it doesn't enhance your professional image, or enrich workplace relationships, you should keep it to yourself."

Maybe your colleague or boss took credit for your work, but carping about the problem to your coworkers rarely helps, Oliver says. Instead, it's best to address the issue with the person who took credit for your idea.
Really? Sharing is caring and all, but no one at work should be that close.

"Whether the charge is legitimate or not, spreading it around will not serve you well — just ask your attorney," Randall says.

If you're really suing your employer, it's best to conduct yourself with discretion and dignity and continue to perform your duties to the best of your ability. If this becomes impossible, you should consider resigning, Randall says.

"But if this is your go-to threat when you're unhappy about something, stop it!" she says.

"Oh no you didn't! Making a negative or contrary remark about anyone's child is an absolute way to make enemies," Randall says.

Always keep your remarks about a coworker's child or children positive, or keep them to yourself.

You may think that you're giving helpful advice, but unless your coworker has asked you about your gym or how you lost weight, this topic is off limits, Randall says.

Your coworker will likely see your comments as more hurtful than helpful, and hurt feelings make for an awkward work relationship.

For some people, the subject of age is touchy, and, just like assuming someone's pregnant is a huge no-no, making assumptions and comments about someone's age rarely results in a positive outcome, Randall says.
Up Next

More on Inc.com:
5 Ways to Prevent Regrets
Remembering the Wisdom of Those We Lost in 2016
10 Gifts to Give Yourself that Money Can't Buy