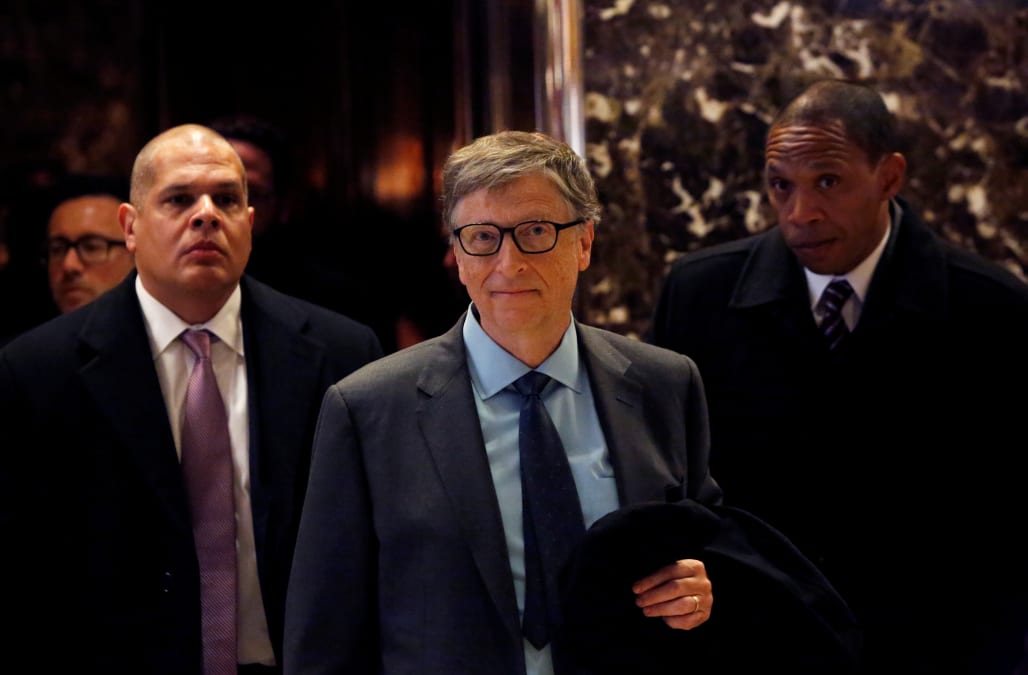 The giants of Silicon Valley gathered at Trump Tower in New York City Wednesday to meet with the president-elect and discuss the future of tech under the incoming administration — and, presumably, to smooth over some lingering (one-sided) feuds.

SEE ALSO: Trump, Thiel, and Bezos walk into a room. What could go wrong?

Trump, along with tech billionaire Peter Thiel, beckoned the group to the gold-plated tower for the sit-down, which began with high-profile tech leaders like Jeff Bezos, Elon Musk, and Alex Kapar striding through the gold-plated lobby.

All boarded the golden elevators to head toward heights unknown, and a highly anticipated meeting with the president-elect.

Trump has few allies in Silicon Valley aside from Thiel, who spoke at this summer's Republican National Convention. The PayPal founder has also been serving as a member of Trump's transition team.

Left out in the cold, apparently, was Twitter's Jack Dorsey, an ironic twist given Trump's love of the platform which he's praised as being a direct line of communication to his millions of followers (that's also allowed him to bypass any press interaction).

Also absent on Wednesday was Bill Gates, though that's because Gates talked to Trump on Tuesday. Talking to the media afterwards, Gates made a head-scratching comparison between Trump and JFK in terms of his openness to innovation.

For his part, Trump has roundly criticized several of the companies in attendance. But his views on tech and apparent lack of understanding are also concerning to many in Silicon Valley. Trump has expressed his support for NASA's space exploration but, as a climate change denier, he's given little support to the organization's Earth science studies.

Give me clean, beautiful and healthy air - not the same old climate change (global warming) bullshit! I am tired of hearing this nonsense.

Trump also displays what can best be described as a "tenuous" grasp as to how the internet works. Speaking of how to fight ISIS and ISIS recruitment, Trump has said, "We must shut down their access to this form of communication, and we must do so immediately." Of course, just simply shutting down the internet, for whatever reason, isn't exactly how things work.

That same misunderstanding extends to cyber-security. Just this week, speaking to reports that Russian hackers interfered with the presidential election, Trump tweeted, "Unless you catch "hackers" in the act, it is very hard to determine who was doing the hacking." Well, that's incorrect and plenty of cyber-security experts told him so.

Finally, perhaps most worrisome is Trump's stance on net neutrality. He (in)famously opposed President Obama advocating having the FCC reclassify broadband internet as a utility like water or electricity. (This allows for more stringent regulation of companies that provide internet access.) And he could roll back even more Obama regulations over internet service providers.

One of the most interesting aspect of Wednesday's meeting is how Trump will treat some of the attendees who were on the receiving end of Trump's ire during the campaign, including Facebook's Mark Zuckerberg (not in attendance Wednesday) for his immigration stance.

He took shots at Jeff Bezos and his two biggest assets, Amazon and the Washington Post.

If @amazon ever had to pay fair taxes, its stock would crash and it would crumble like a paper bag. The @washingtonpost scam is saving it!

The @washingtonpost, which loses a fortune, is owned by @JeffBezos for purposes of keeping taxes down at his no profit company, @amazon.

For his part, Bezos was gracious upon Trump's electoral victory - a far cry from his suggestion last year that we send Trump to space.

Congratulations to @realDonaldTrump. I for one give him my most open mind and wish him great success in his service to the country.

Finally trashed by @realDonaldTrump. Will still reserve him a seat on the Blue Origin rocket. #sendDonaldtospacehttps://t.co/9OypFoxZk3

Trump also picked a big fight with Apple, putting the company on blast when they refused to assist the FBI with accessing a locked iPhone used by the shooter in the 2015 San Bernardino terrorist attack.

I use both iPhone & Samsung. If Apple doesn't give info to authorities on the terrorists I'll only be using Samsung until they give info.

After Trump's victory, Apple CEO Tim Cook sent an internal email that called on employees to unify as they moved forward into the Era of Trump.

And, lest they be left out, Trump took a shot at Google in the closing days of the race, accusing them, along with Twitter and Facebook, of burying bad news about Hillary Clinton.

BONUS: This car of the future comes with its own urban garden