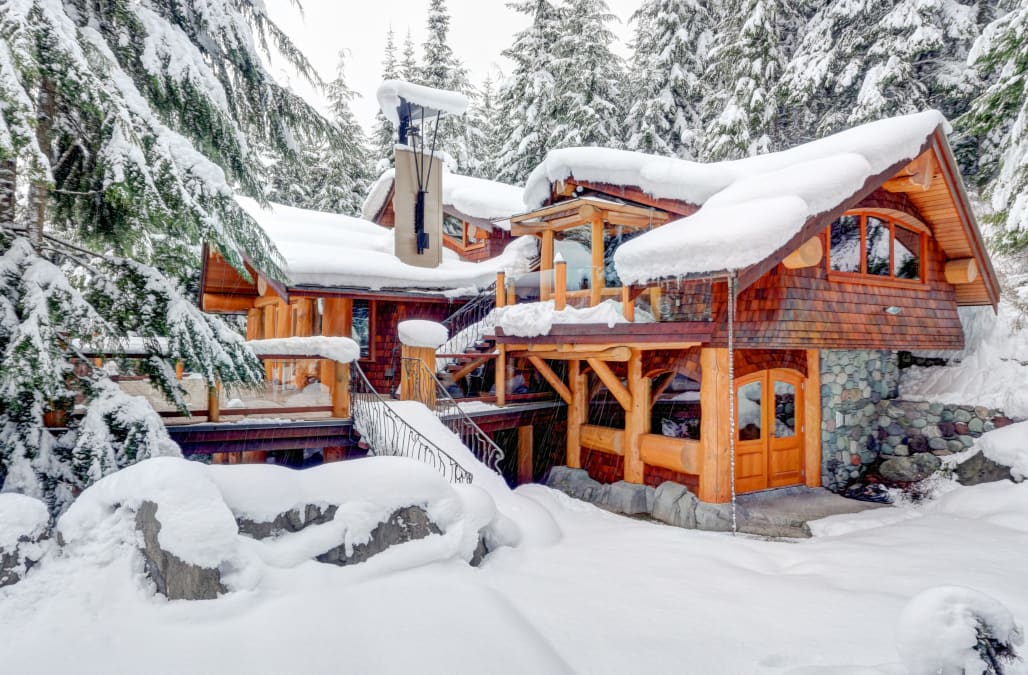 Just as quickly as Halloween and Thanksgiving had their moments, it looks like we've once again found ourselves smack in the middle of the holiday season.

The upcoming holidays mean the inevitable beginning of the long winter season, and whether you like to ski, snowboard or take your talents to chugging hot cocoa by the fire, there's no denying that the chilliest months of the year offer prime time for luxurious relaxation.

SEE ALSO: Top 5 reasons to buy a home during the holidays

From Colorado to New York and all the way to Canada, ski resort towns in North America are becoming more extravagant and sought after than ever.

Celebrities and moguls everywhere will be flocking to giant mountainside houses with stunning views and guaranteed snowfalls over the next few months.

But if you're not exactly celeb status with an on-demand house in Aspen ready for your arrival, fear not – You can still live the winter luxe life just as your favorite famous snow bunnies do.

Click through to see the 10 homes and their corresponding cities below:

Home to Whistler Blackcomb, one of the largest ski resorts in North America, Whistler has become synonymous with breathtaking scenery and world-class skiing and snowboarding. Celebrities such as Sarah McLachlan have been drawn to the snowy escape, which boasts world-famous snow activities including snowshoeing, tobogganing and ski jumping at the site of the venue for the Vancouver Winter Olympics, Olympic Park, as well as the Whistler Film Festival and a renowned après-ski restaurant scene.

Set within Canada’s first national park, Banff is a resort community with a rich cultural and natural history, recognized globally and designated as a UNESCO World Heritage Site. In addition to boasting some of Canada’s best slopes for skiing, Banff has a vibrant arts scene with the Banff Centre, Whyte Museum of the Canadian Rockies and many private galleries which attract notable names such as Alec Baldwin, Meg Ryan and Glenn Close to the town.

Home to both the largest ski resort in North America and the Sundance Film Festival, Park City attracts celebrities such as Will Smith and Michael Jordan, who love the outdoor recreational activities. For those who prefer to skip the slopes, the picturesque town also features a thriving arts and culture scene, world-class fine dining and luxurious retail offerings.

Bromont is known as North America’s largest ski destination for illuminated nighttime skiing and boasts over 141 total trails. Canada’s most recognized business executives, politicians, celebrities and athletes live in the area and enjoy Bromont’s vintage downtown village with quaint shops and restaurants and its breathtaking natural beauty with scenic vistas.

Consistently voted the #1 Ski Resort in Eastern North America by SKI Magazine readers for close to two decades, Tremblant not only features some of the most sought-out slopes in North America, but also a variety of highly acclaimed major events including IRONMAN Mont-Tremblant, 24h Tremblant, Snow Polo, Canadian Alpine Championships and Canadian Snowboard Championships. The winter enclave’s other renowned offerings, including panoramic views of the spectacular Laurentian mountain range, proximity to the beautiful Mont-Tremblant National Park and its diverse recreational offerings, variety of notable restaurants and Circuit Mont-Tremblant have been known to lure in A-listers such as Catherine Zeta Jones and Michael Douglas and professional athletes including Mario Lemieux.

A vibrant resort destination, Lake Placid is world-renowned for hosting the 1932 and 1980 Winter Olympics. Lake Placid resides in the Adirondack Park, a forever wild preserve with quaint villages nestled in the mountains and lakes. The area offers a respite from the city with notable names such as James Burrows, Mike Richter and Andrew lack all calling Lake Placid home to escape the crowds, admire the natural scenery and enjoy the array of winter activities includes ice climbing, Alpine and cross-country skiing, snowshoeing, ice skating and snowmobiling.

With over a dozen resorts featuring slopes perfect for the avid skier or snowboarder to hit, including Donner Lake, Heavenly Valley and Squaw Valley, key players and celebrities alike, from Larry Ellison to Michael Milken, have been known to flock to the snowy escape in the Sierra Nevada. The area features breathtaking natural scenery, with the namesake lake a pinnacle of the region, notable hiking and biking trails, and a vibrant cultural scene with festivals such as Snowglobe and Snowfest.

Known as the nation’s first ski resort destination, Sun Valley was first put on the map in the late 1930s when glamourous stars of the day began to visit its premier ski area, Bald Mountain. Since then celebrities from the likes of Jamie Lee Curtis, Demi Moore and Clint Eastwood have called Sun Valley home for the winter season. Its beautiful natural surroundings, seclusion from the rest of the world and unmatched slopes make Sun Valley the ultimate spot to retreat from the hustle and bustle of daily city life.

Renowned for having some of Colorado’s most sought-after ski slopes, Vail consistently attracts famous figures, such as Michael Bloomberg and Lindsey Vonn, who are drawn to the exclusivity and wider variety of activities than a traditional ski town, such as dance festivals, concerts and the Audi Birds of Prey World Cup. The notable Colorado region also boasts beautiful natural landscapes from the scenic countryside trails to picturesque mountains.

A well-known celebrity retreat, Aspen is a popular ski town with more to offer than just hitting the slopes. Celebrities such as Goldie Hawn, Kevin Costner, Mariah Carey and Antonio Banderas call Aspen home every winter and enjoy exploring the Aspen Art Museum, tasting the latest foodie sensations at the Aspen Food + Wine Festival, dining at the area’s over 60 fine dining establishments, or participating in the area’s many festivals and activities including the X-Games, Winterskol and FIS World Cup.

So whether you want to brave the cold or never leave the couch, these cities will offer you a little bit of everything.

"As Canada and the United States offer some of the best ski destinations in the world, these areas are continuing to attract notable global clientele. Our on-the-ground experts from each these towns have pulled together the top residences that allow todays discerning buyers to live luxuriously in these beautiful destinations."

RELATED: 25 most expensive cities for owning a home

25 most expensive cities for owning a home

More on AOL.com:
There's about to be a shift in who dominates the US housing market
16 hilarious listing photos that show what not to do when putting your house on the market
10 real estate trends to watch in 2017