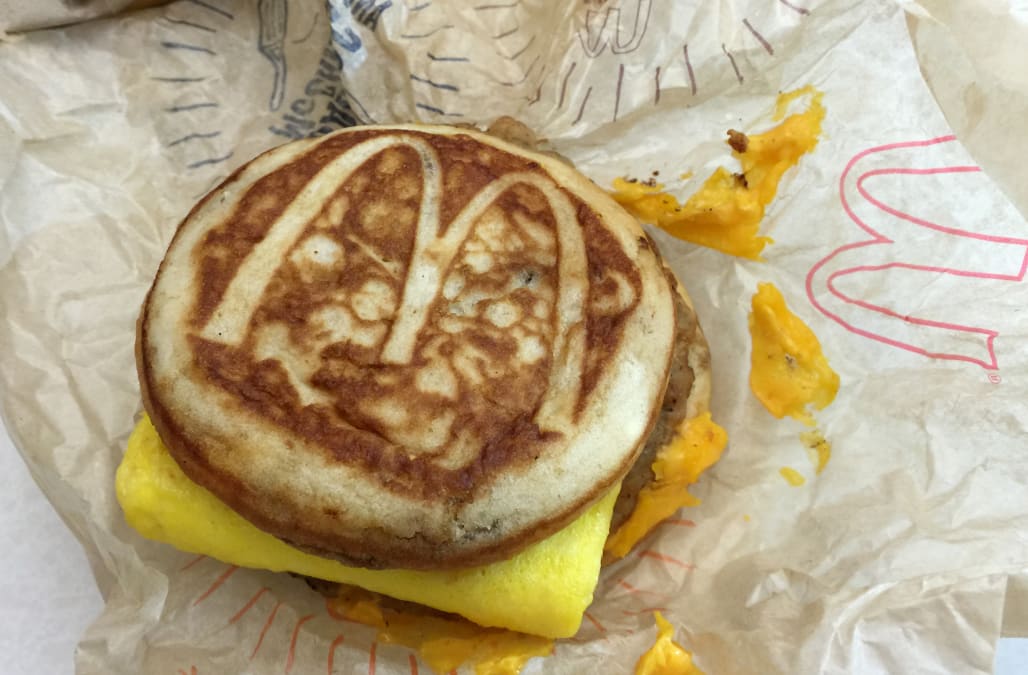 The fast-food world exploded earlier this year at the revelation that McDonald's is testing a Chicken McGriddle sandwich.

Even better news: McDonald's has since expanded the test, rolling it out to several other regions across Ohio, which suggests that the sandwich has been a big hit in the state so far.

The new item combines a fried chicken patty and the sweet pancake buns of the McGriddle breakfast sandwich.

Only time — and Ohioans — will tell if the sandwich has national staying power. But we couldn't wait to try it for ourselves, so we decided to construct our own Chicken McGriddle.

So how to go about constructing your own Chicken McGriddle? It's pretty simple. First, buy a simple Sausage McGriddle and a Crispy Buttermilk Chicken sandwich.

The humble Sausage McGriddle works best, as there's no egg or cheese to mess with.

After all, it's the buns we're after here. The McGriddle buns are specially formulated with maple-syrup crystals to give a sweet, syrupy flavor without the sticky mess.

It's best either to order a custom chicken sandwich with only the chicken and a bun or to ask for the Crispy Buttermilk sandwich sans tomato, lettuce, and mayo. Otherwise, there's going to be a weird mayonnaise taste in your Chicken McGriddle.

We've already reviewed the new Crispy Buttermilk chicken, so we know it's decent. It doesn't hold a flame to Chick-fil-A or Shake Shack's new chicken sandwich, but it's good nonetheless.

OK, so the recipe is pretty simple ...

... so we're not going to spell it out for you. There you have it, in all its crispy, sweet glory.

Of course there's no chicken item on McDonald's breakfast menu right now, so implementing such an item nationally would involve some finagling on the franchisees' ends. But the big question is, is it good?

The short answer is yes. The crispy, salty chicken melds perfectly with the spongy and sweet maple flavor of the bun. It doesn't have quite the same savory edge as the normal sausage or bacon McGriddles have, but it's a different taste altogether. It's rich without being overbearing.

Plus, it feels a lot healthier than the sausage or bacon varieties — even if it really isn't. This could definitely be a huge hit.

First, Burger King's chicken nuggets. These nuggets are firm, but not crispy compared with other options. We paid $5.89 for 10 pieces.

On first bite, we taste a little kick — possibly thanks to the noticeable pepper flakes in the breading. But these nuggets have a spongy texture that feels questionable.

Second up: Chick-fil-A. On the outside, these golden nuggets are tiny, crispy, bite-size balls housed in a simple box.

The first bite is a whole bite of the chicken nugget. It's tender and the chicken tastes like chicken — a huge relief. For $3.05 for eight pieces, these small nuggets offer a big blast of flavor.

But after taking a bite, we were unimpressed. The chicken did not taste like chicken and the breading was bland. These chicken nuggets are boring.

Finally, the classic McDonald's Chicken McNuggets. The breading of these nuggets have a distinct color — slightly lighter than the other nuggets.

Crunch! McNuggets are delightfully crispy. Thankfully, these taste like chicken, but we could not decipher what the secret ingredient could be for the delicious breading. It's the classic McNugget, for good or bad. We'll take it — and not question it — at $4.99 for 10 pieces.

After eating all these bite-size chicken chunks, who comes out on top? Based on our our decidedly unscientific taste test to find the perfectly tender, crispy, and authentic chicken nugget ...

.. Chick-fil-A takes the title. The classic McNuggets are second, followed by Burger King and Wendy's. Chick-fil-A's simple little nuggets provide the right texture, flavor, and crispy goodness that lead us to believe it has the best chicken nuggets in the game.

SEE ALSO: We tried every fast-food breakfast hash brown out there — here's who does it best