Magic Kingdom's Future Magic May Be Managed By Disney Drones

Share
Rick Aristotle Munarriz, AOL.com
The next time Disney (DIS) raises the bar when it comes to in-park entertainment, don't be surprised if an army of drones is holding up that bar. The family entertainment giant published some interesting patent applications late last month for concepts that could wow audiences, with unmanned aircraft vehicles doing a lot of the heavy lifting. Up in the Air

Disney tested drones out two years ago with the opening of the New Fantasyland expansion at Disney World's Magic Kingdom in Florida. 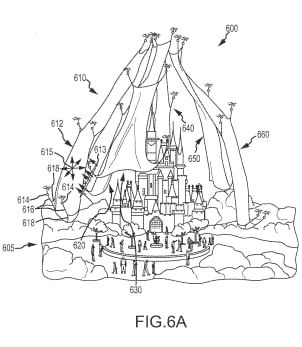 In the days leading up to the official opening of the most ambitious expansion in the park's history, Disney's blog teased about dragon sightings, culminating in an actual flying dragon that wowed travel journalists and bloggers who were invited to the after-hours grand opening.

Daytime guests never got to see the dragon in action. Despite the initial hype, the unmanned aircraft vehicle dolled up as an audio-animatronic dragon was limited in its watch over New Fantasyland. Was the dragon unreliable? Were there concerns that park guests would freak out if they saw the winged creature in action? Were there safety concerns that the dragon would falter or crash into something and come plunging into a sea of patrons?

When Disney adds a new ride, it may not be as thrilling as the coasters and thrill rides that rival theme parks and regional amusement park operators are adding, but it can invest in the richly themed experiences that make Disney's gated attractions unique.

Isn't that what it's doing here with the drones? Isn't Disney going where no rival has gone before or likely to go in the near future? Cedar Fair (FUN) and Six Flags (SIX) aren't going to be investing in unmanned aircraft vehicles to entertain folks clicking through their turnstiles. They can't. They don't generate the annual attendance and revenue per customer to justify the tech expense.

They will be watching all the same. Disney is under no obligation to go through with its drone dream, but it doesn't make sense to back down after having come this far. This investment in technology will be able to deliver unique entertainment that can be modified quickly and cheaply to provide fresh applications. It's not just Peter Pan or Dumbo that will be flying at Disney's theme parks, and with that comes the family entertainment giant's even bigger dream of flying itself.