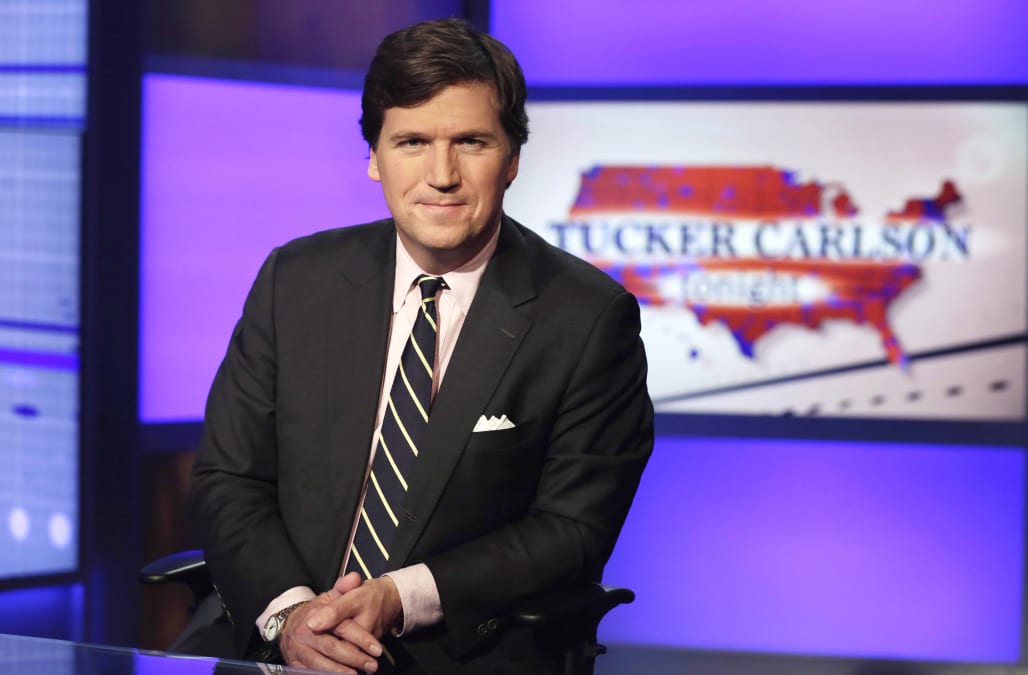 But the papers were lost ― and so Carlson concocted yet another conspiracy theory to explain their disappearance.

Carlson claimed a “source” gave the Fox News show “damning” documents about Biden on Monday. Carlson’s producer shipped the documents across the country via a “brand-name company,” but they never arrived.

Instead, the shipping company said the package had been opened and the documents were missing.

The shipping company launched a search and called in security to interview everyone who touched the documents, Carlson said.

“They went far and beyond, but they found nothing,” he said. “Those documents had vanished.”

He said the unnamed company’s executives are “baffled and deeply bothered by this, and so are we.”

Carlson did not explain why they shipped the only copy of “damning” documents.

BREAKING: Documents Tucker Carlson never actually had that would allegedly blow up the election were so important that they were sent via DHL, and now can’t be found despite copiers, iPhone cameras and security cameras. 😂😂😂 https://t.co/9yKkDAUh2v

Oh for f*%! sake, seriously? Would have been a better story if your dog ate the damn papers. https://t.co/6yllQu7pU0

did you check underneath Trump’s healthcare plan https://t.co/Ec9PBvdBRu

Wait, so I’m supposed to believe that Tucker’s producer *mailed* him a cache of election-changing documents — rather than just faxing them over, using their camera phone, or just adding them to a show slide — and said documents were stolen in the mail?

The mimeograph machine was broken.
They tried to call, but couldn't find a phone booth.
Then they ran out of typewriter ribbon. https://t.co/EzjSeJjmPe

Shit. They must have gotten lost with Hillary’s email Server. Those darn mail people. What scoundrels. Now Tucker, do the thing about the 226,723 Americans who have died of Covid or the one about the Stock Market crashing today. And go... https://t.co/BvUdzLg2n6

EVERY Trump supporter will believe this. All of this. I know because I’ve already heard from hundreds of them. https://t.co/EbWWq9edtJ

Ha! The producers sent the ONLY copies. Oh no! https://t.co/nhVoAEFjOq

Obviously the executive producer tipped off the Clinton Foundation, which has a network of deep penetration document-interception agents inside Fedex. Trust nobody. https://t.co/fhobizU5Eb

Fascinating tale. But the source isn’t simply resending you a copy why? https://t.co/YGQgmwWCJJ

Like Tucker, I also send my super secret documents through the mail and fail to make a copy. https://t.co/QFNgRGBjPz

This is - and I do not say this lightly - the dumbest fucking thing this dumb motherfucker has ever broadcast.

The Boya from La Jolla alleges his team had critical documents but didn’t bother making a copy and just dropped them in a FedEx where nefarious things occurred!

It would be impossible to explain to aliens why Tucker Carlson has a show https://t.co/EhBm6CsZ3z

More from HuffPost US:
'Saturday Night Live' Taps Jim Carrey To Play Joe Biden For 46th Season
Kris Jenner sets the record straight on why 'KUWTK' is ending
A story all about how 'Fresh Prince Of Bel-Air' is getting a reboot