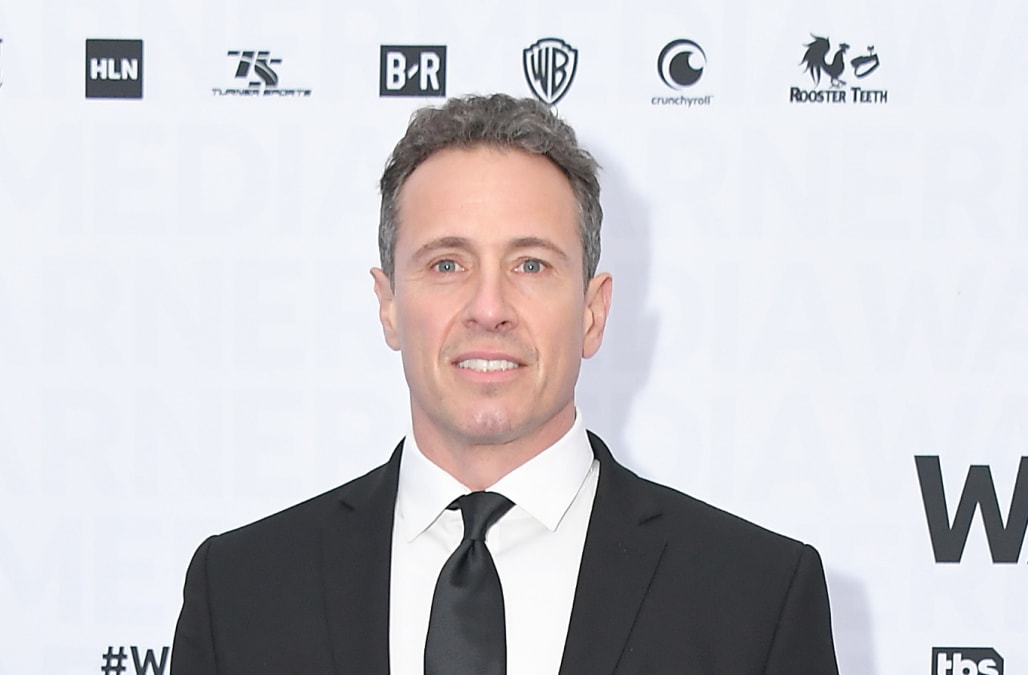 Chris and Andrew Cuomo have never shied away from poking fun at each other during their conversations on Cuomo Prime Time, but on Wednesday, Chris took the ribbing to a new level.

Things started off strong when Andrew joined Chris' CNN news program via video chat. The New York governor was rocking a blue surgical face mask in an effort to promote the use of PPE to slow the spread of the coronavirus.

"I like it and I get the statement you're making," Chris said, when his brother asked why he looked surprised at his appearance. "This is what leaders should be making. I get it. I appreciate it. I don't think you need it right now, though."

"If you like it, I'm taking it off," Andrew said with a laugh as he removed the mask.

"No, I just don't want to deny my audience that beautiful visage they like so much," Chris quipped.

The pair then had a somewhat straightforward interview about the governor's efforts to increase the amount of people who are getting tested and to normalize the test itself, after many people voiced concerns about how much the test hurts.

To try to calm the public's concerns, Andrew took the coronavirus test on live TV, barely reacting to the process as a nurse inserted a large swab deep into his nasal passage.

However, Chris had prepared some prop comedy to mock his older brother.

"First of all, is it true that when you are having the test administered, you inhaled and the doctor's finger went all the way up your nose and got stuck and had to be released with a tool?" Chris asked with a straight face.

"No, actually she wanted to comment that I have a little button nose and she was afraid the swab would actually hurt because it extended my nasal cavity," Andrew replied. "She was speaking about the delicacy of my nose."

Chris then pulled out a coronavirus testing swab and explained how it was the standard size swab. Then, he pulled out a fake cotton swab about 10 times bigger and asked, "Is it true that this was the swab that the nurse was actually using for you? And then it went into your nose and disappeared?"

As the governor shook his head and tried not to laugh, Chris then pulled out a comically huge swab with cotton the size of a baseball bat.

“Is it true… this was the actual swab that was being used to fit up that double barreled shotgun that you have mounted on the front of your pretty face?”

.@ChrisCuomo and his brother NY Gov. Andrew Cuomo share a light a moment over the governor’s televised coronavirus test. pic.twitter.com/ETcnPkTjqV

"So then, in scale, this was the actual swab that was being used to fit up that double-barrel shotgun that you have mounted on the front of your pretty face?" Chris concluded.

Andrew had a hard time keeping a straight face and admitted, "I thought I did so well on that nasal test. Standing up there, she did the swab, I did not flinch. I was a cool dude in a loose mood."

"Of course you were! That swab was like a piece of lint going in that thing on your face. How could it have collected anything?" Chris said. "It was like throwing a rock around a cave!"

"That is so not right," Andrew responded, struggling to keep his cool. "This is not love."

The show went to a commercial, and when they came back, the pair continued with their straightforward interview, although it was clear that Andrew was still irritated at his little brother.

Chris tried to smooth things over at the end, but to no avail.

"Thank you for coming on, thank you for having a good sense of humor about what is a very important public service message," Chris said. "A lot of people aren't getting tested because they're worried about it. Thank you for showing people how easy it is to get tested."

For more on the brothers' high-profile rivalry, check out the video below.

More from ET Online:
Cher celebrates her 74th birthday with a social distancing party outside
Matt Lauer gets new arm tattoo about 'hatred'
Lana Del Rey hits back at critics saying she 'glamorizes abuse': I 'paved the way' for top female artists