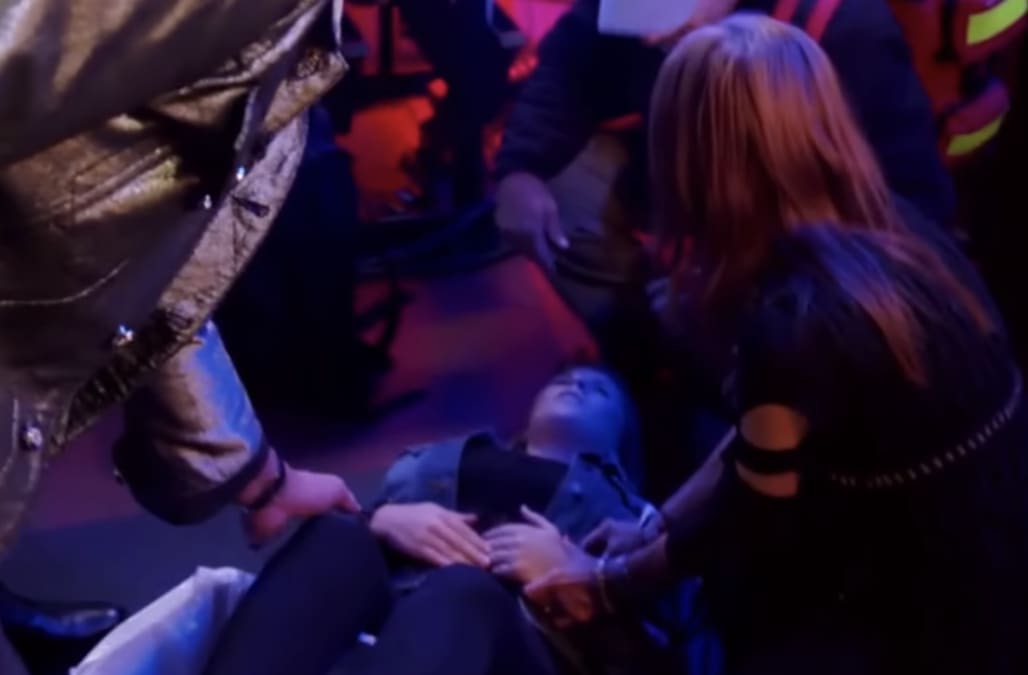 Monday was the final day of American Idol Season 18’s Hollywood Week — the crucial solo round with a full band — and it was “survival of the fittest,” according to host Ryan Seacrest. And one contestant, 17-year-old country singer Makayla Brownlee, almost wasn’t able to handle the pressure, due to a rare condition called vasovagal syncope that causes her to react to stress in an extreme way. “There’s nothing I can do to prevent a seizure,” she explained. “When I’m stressed out, my body just reacts differently.”

The way Makayla’s body reacted, when she finally got her turn onstage to sing Kacey Musgraves’s “Rainbow” for the judges, was to go weak, appear as if she was about to throw up, and scurry off into the stage wings, her hand cupped over her mouth. Medics swooped in to assist, and concerned executive producer Trisha Kinane told the show’s staff, “She’s stabilized, but they’re unsure if she can return.”

Thankfully, Makayla was able to come back — greeted by a standing ovation — though she had to sit on a stool for her second performance attempt. Despite being physically weak, she powered it through, the optimistic “Rainbow” taking on new gravity due to the circumstances, while her father in the Orpheum Theater audience and judges Katy Perry, Lionel Richie, and Luke Bryan were all in tears. It was enough to advance Makayla to the top 40, but hopefully she will be OK, because it’s only going to get more stressful from here.

There were tears of another kind later in the episode, when other contestants found out they had not made the top 40 — and therefore would not be heading to Hawaii for the season’s final showcase determining who makes the top 20. YZthaSinger, Kat Luna, Shenei Maisonet, Jimmy Levy, and Peyton Aldridge were among those cuts, but the saddest elimination had to be returning contestant Margie Mays. She actually made it to Hawaii last year, and had hoped to do so again this time with her boyfriend, fellow contestant Jonny West, by her side. Jonny and Margie needed this solo round to redeem themselves after their disappointing duet the day before, and while Jonny made it through on the strength of his soulful original song, Margie’s heartfelt “Lost Without You” wasn’t enough — even though I thought it was her best performance of this season. When Jonny searched the Orpheum lobby in vain after the judges’ decisions were revealed — hoping to celebrate with Margie — and realized he’d be going to Hawaii alone, he genuinely seemed more heartbroken than she was.

Speaking of original songs, while Jonny’s was a winner, some of them really were not up to snuff. It was clear many contestants were hoping to become the next Alejandro Aranda (who visited Hollywood Week to give them a pep talk while they totally fanned out). But as Katy put it, most of their cringey originals were “not  all there yet,” and hardly at the level of Alejandro’s instant classics “Out Loud” and “10 Years.” Even some frontrunners, like Julia Gargano — who forgot the name of her own song, which is never a good sign — and Robert Taylor struggled. At one point, an exasperated Luke even tossed his pen down in disgust (during Jimmy Levy’s bizarre, rambling original), burying his face in his hands. “Disappointing,” Katy grumbled.

Along with Jonny West, one of the few contestants whose original did not disappoint the judges was Lauren Mascitti. The panel seemed to adore “God Made a Woman,” Lauren’s dedication to her beloved grandmother sitting in the audience. But while the gesture was sweet, I found the tune to be simplistic and sing-songy, and its Biblical Adam/Eve conceit trite and clichéd, sort of a rip-off of Voice contestant RaeLynn’s corny single “God Made Girls.”

While the judges went easy on Lauren, I do have to say I appreciated how, for once, they were channeling their inner Simon Cowells and Nicki Minajes rather than being their usual softie selves. When a slew of contestants overdid their runs and vocal acrobatics (Nick Merico’s “Heaven” being one hellish example), the judges’ aghast reactions and zingers were pure comedy. “Whyyyyy are they doing this to themselves?” groaned Kat. “Did I take the wrong vitamin pills this morning?” Lionel gasped. “Are they chugging caffeine backstage or something?” said Luke. Luke even half-jokingly contemplated having only a top 20 in Hawaii. So Katy went backstage to dole out some tough love. “Can I talk to them? This is getting stupid!” she cried out.

Once backstage, Katy told the contestants waiting in the wings to perform: “Hey, just want to give you a tip. Everyone’s trying all these high notes that they’ve never done before — and it sounds really weird and it’s freaking us out! So just like, be yourself. Just be good.”

Thankfully, there were plenty of contestants who took Katy’s advice to heart. Among my favorite “good” performances were Jovin Webb’s “Parachute” (he was truly in his element with a full band); Faith Becnel’s sassy “Cry for Me” (Luke said she was “like a daggone Dolly Parton”); real-deal Franklin Boone’s raw but tastefully restrained “River” (he actually could be this year’s Alejandro Aranda); personality-plus Perrin York’s vivacious “Good As Hell”; Genevieve Linkowski’s passionate and masterful “In My Blood”; Just Sam’s joyous take on The ColorPurple’s “I’m Here” (a major coup, considering she had throat issues); young Lauren Spencer-Smith’s unexpected mature and intense “The Joke,” which was serious stuff; and Louis Knight’s redemptive cover of Lewis Capaldi’s “Hold Me While You Wait” that gave Luke chills.

I also loved a performance by another Makayla, Phillips — a “daggone Ariana Grande,” according to Luke — an epic rendition of Lizzo’s ambitious and over-the-top “Cuz I Love You.” But the tough-loving judges didn’t love it at all, with Katy even grunting, “That was the worst song she picked!” Thankfully, Makayla made it through, but I hope the judges don’t crush her adventurous spirit. I don’t want her doing predictable Mariah/Whitney/Adele ballads all season.

On Sunday, the top 40 head to Hawaii, for one last grand adventure before next Monday’s (already taped) “Green Mile” mass-elimination episode, and, most likely, a live-show hiatus due to coronavirus concerns. See you then.