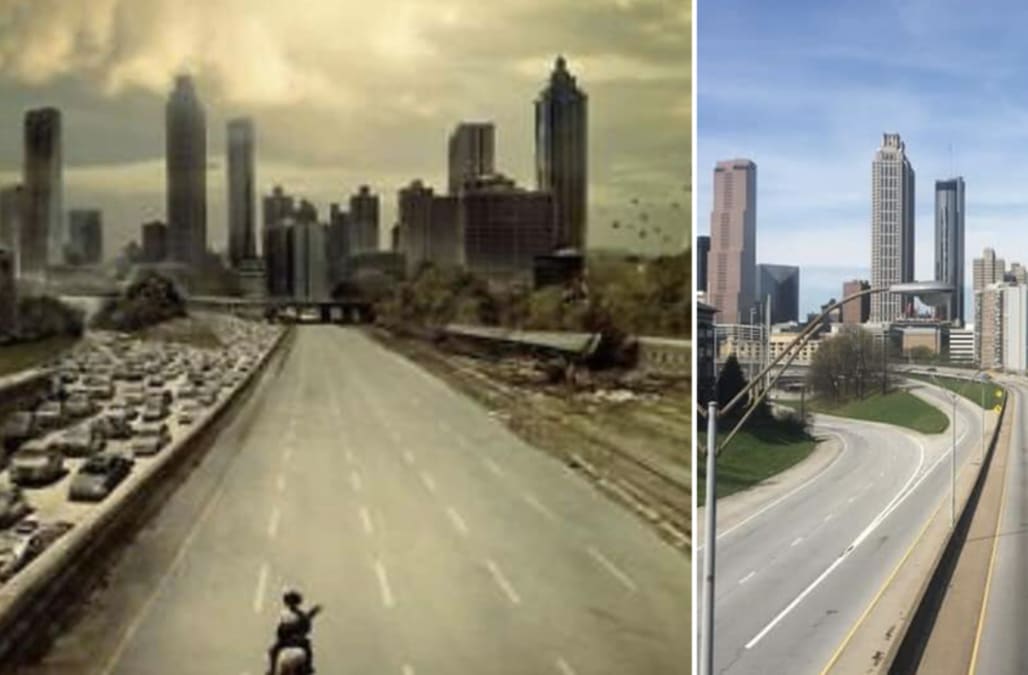 A set of side-by-side photos have Twitter users comparing “The Walking Dead” to real life.

The images — one from season one of the hit TV show, and the other taken sometime around March 20 — depict the city of Atlanta in two vastly different situations.

Shared by Twitter user Afshin Shirinzadeh, the second photo depicts the real-world version of Atlanta’s usually-busy highways as countless residents have taken to self-quarantining. Shirinzadeh shared the image alongside a still from “The Walking Dead,” in which Atlanta has become completely deserted due to an outbreak of zombies.

So I asked my old college mate, that lives in Atlanta, to try and reproduce this iconic promo photo from s1.
With there being no Atlanta traffic due to the pandemic, he went to Jackson St Bridge and took this for me today.
Creepy.

“So I asked my old college mate, that lives in Atlanta, to try and reproduce this iconic promo photo,” Shirinzadeh’s post read. “Creepy.

Both photos depict Atlanta, which has a metropolitan population of 5.6 million people, from the Jackson Street Bridge on the city’s east side. In Shirinzadeh’s photo, credited to Lori Kristen, the streets are completely empty and free of traffic.

The comparison immediately went viral, receiving hundreds of comments from users who found the real-life image “haunting” and an “exact recreation” of “The Walking Dead’s” fictional version.

“This is insanely haunting,” one user wrote.

“Wow this is so much awesome. Exact recreation of the epic poster,” another added.

The stark emptiness of the road, which is normally congested with traffic, led many users to accuse Kristen of photoshopping. However, she stepped in on Twitter to defend herself.

“Absolutely not a photoshop. It’s mine and my friend’s photo. Here he is in it. If you can’t tell a fake pic from a photoshopped one, there’s an issue. It’s legit,” Kristen wrote in response to one commenter.

Absolutely not a photoshop. It’s mine and my friends photo. Here he is in it. If you can’t tell a fake pic from a photoshopped one, there’s an issue. It’s 💯 legit. pic.twitter.com/hBKHOOWYx4

Atlanta has yet to issue a stay-at-home order to its residents, however one is expected on the evening of March 23, according to the Atlanta Journal-Constitution.

If that happens, residents will have plenty of time to get caught up on “The Walking Dead,” which is currently airing its 10th season.

The post People are comparing this empty highway to a ‘Walking Dead’ scene appeared first on In The Know.

We’re obsessed with how fast this tiny tool minces garlic

This pocket-sized product will clean and polish any device screen