Stars are holding free concerts on Instagram as people quarantine: 'From my heart to yours' 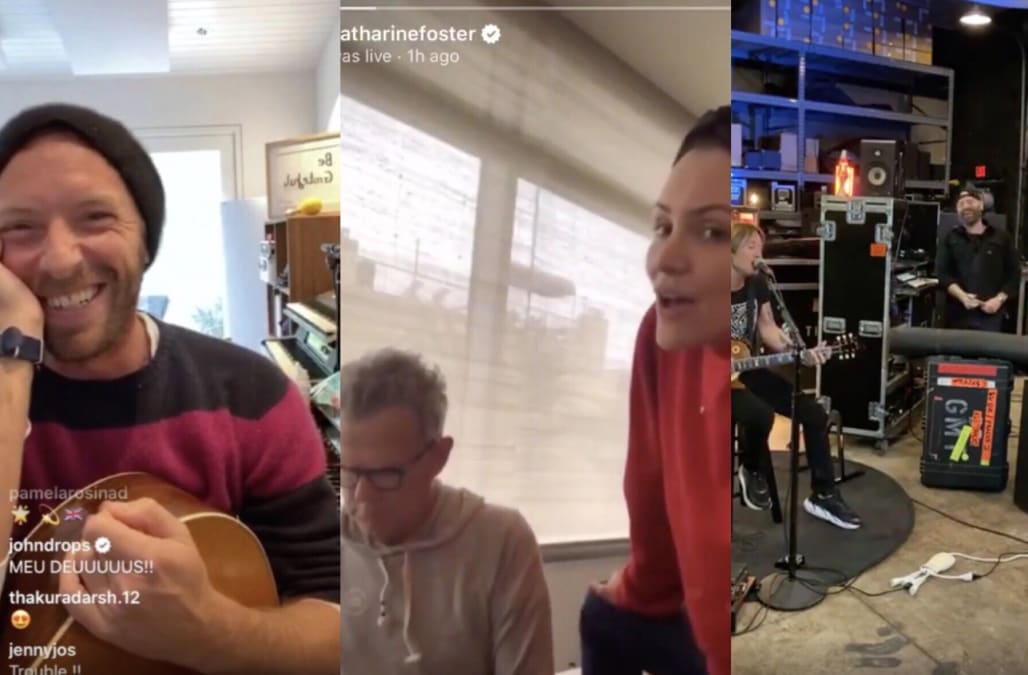 As world leaders continue to encourage the global community to stay inside, work from home and practice social distancing in an effort to curb the spread of coronavirus, some of our favorite singers are taking to social media to lift people’s spirits by putting on free concerts for fans.

Coldplay frontman Chris Martin seemingly kicked off the trend on Monday, going live on the band’s Instagram account to play several of their most recognized hits like “Yellow” and “A Sky Full of Stars” throughout a 30-minute piano set.

“I was supposed to be with the band Coldplay today from which I come but they are stuck in different countries, so we can’t play together,” Martin shared. “So, I thought what would be nice would be to check in with some of you out there and see where you are and what I can do for you … so I’m here at your service for the next 20-some minutes.”

Inspired by his fellow musician, John Legend announced that he would be doing a free, live concert on his own account on Tuesday, also using the #TogetherAtHome hashtag.

“My friend Chris Martin did a lovely little concert from home today. I’ll be doing one tomorrow at 1pm Pacific time,” Legend tweeted. “See you soon. We’ll try to get through this together!”

My friend Chris Martin did a lovely little concert from home today. I'll be doing one tomorrow at 1pm Pacific time. See you soon. We'll try to get through this together! #TogetherAtHomehttps://t.co/YZ8Y1W8esc

Of course, his wife, Chrissy Teigen, added that she’ll be there for the concert: “I’ll be there!!” she said. “because I literally have no choice.”

Social distancing is important, but that doesn't mean it has to be boring. I did a little at-home performance to help lift your spirits. @Miguel, @CharliePuth - you want next? Learn more about how you can take action to help slow the spread of coronavirus with our partners at @WHO and @GlblCtzn globalcitizen.org/coronavirus #TogetherAtHome

During the concert, Legend sang a slew of his own songs, as well as some covers, as Teigen and their daughter, Luna, sat on his piano. The "All Of Me" hitmaker donned a bathrobe for the casual concert, while Teigen wore a bath towel, as voted on by her Twitter followers.

P!nk was another artist who gave her fans some musical escapism during this tough time, taking to her Instagram to sing a cover of “Make You Feel My Love,” a song originally performed by Bob Dylan but also famously covered by Adele.

“Free concert slash piano lessons from my heart to yours,” she captioned her rendition. “To make you feel my love.”

To make you feel my love 😍 rehearsals

Katharine Foster and her husband, David Foster, also performed some songs together on Instagram Live, with the former “American Idol” contestant writing afterwards that they’re planning on sharing more musical moments for people’s entertainment during the quarantine and asking for song requests.

.@katharinemcphee is smart & is STAYING HOME. Be like Kat.

I know the news is making a lot of people fearful & anxious, so please seek out moments of lightness like this every day. Take some deep breaths. Be grateful for your health. Be kind to yourself.💕#StayHomeSaveLivespic.twitter.com/lCd8KSz9wO

“hi guys- just me here wearing the same sweater for 3 days. me & the hus @davidfoster had so much fun at the piano today going live,” she wrote. “we wanna try and do it everyday at 5:30 PT cuz what else is there to do? Song suggestions below? Thanks @erinfoster for the great idea. see ya all tomorrow?”

Just me here wearing the same sweater for 3 days. Me & @davidfoster had so much fun at the piano today going live. We wanna try and do it everyday at 5:30 PT cuz what else is there to do? Song suggestions below? ⬇️ Thanks @erinfoster for the great idea. see ya all tomorrow? ❤️ ps- it’s crazy how many Grammys I have no?

Keith Urban delivered his fans a free, 30-minute set on Instagram, too, with his Oscar-winning wife, Nicole Kidman, joining in the background for a quick cameo.

Other stars who have gone live to share their musical talents with the world from their homes? Matchbox 20 frontman and "Smooth" hitmaker Rob Thomas, country superstar Luke Bryan and up-and-coming Nashville singer Carly Pearce:

During these uncertain times the entire world is shutting itself down. Part of that means that people aren’t going out and enjoying live music or any entertainment. I’m kicking this off and I invite all my brothers and sisters in the music world to go on Instagram and share a little something with people to help them while they hunker down in their homes. #SocialDistanceSessions #SDSessions Come on @johnmayer @jason_mraz @ingridmichaelson @christrapperofficial @chrisdaughtry @mattnathanson @johnlegend @matthewkoma @countingcrows @abbyandersonmusic @brandicarlile @gavindegraw @alanis @cyndilauper #togetherathome

Being inside & in the silence of my own thoughts has been interesting. I’m struggling to not be fearful— my mom has very weak lungs and has basically been quarantining. Whether we are directly affected or not, we know someone or have a loved one who could severely be effected by this dangerous virus. This song has always been one of my favorites & these words rang so loud in my ears today. I hope they bring you a sense of peace and a little less fear. ♥️🙏🏻

MeUndies will jazz up your boring underwear drawer

Sanitize your makeup brushes with this cult-favorite cleaner