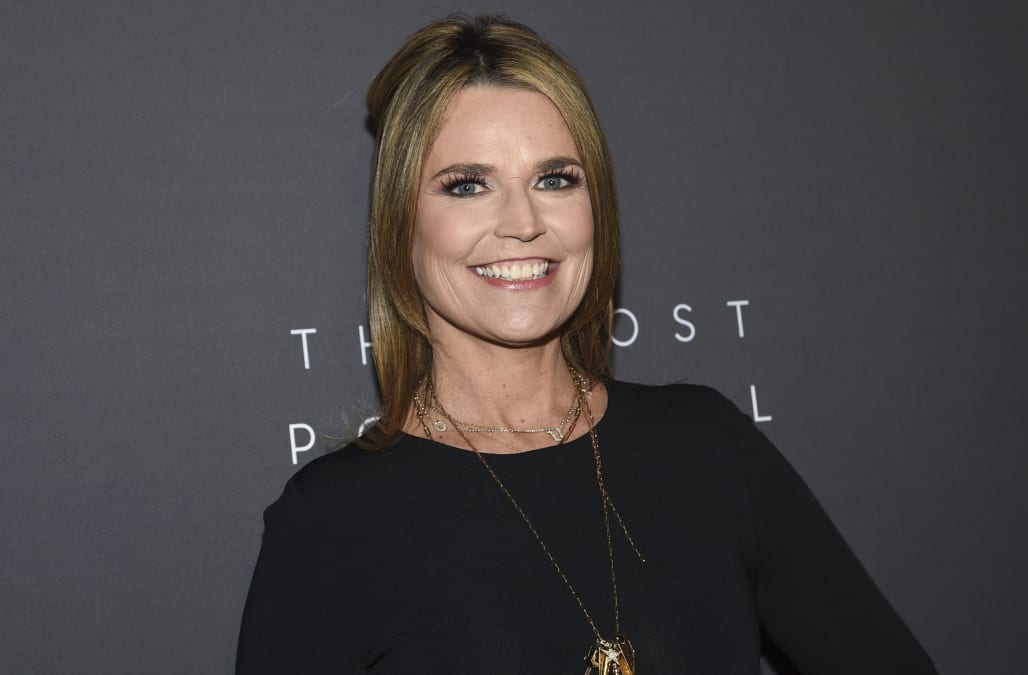 The Today show must go on, despite another one of its top personalities going into self isolation. Savannah Guthrie revealed Wednesday that she was working from home after coming down with a sore throat.

“Welcome to Today. Thank you so much for joining us on this Wednesday morning,” Hoda Kotb said at the start of the show, revealing she was anchoring solo from the NBC morning show’s studio. “Things look a little different. I feel a little lonely here. I miss my partner in crime. She’s usually six feet away here but Miss Guthrie, where are you?”

“Well, now we’re really socially distancing aren’t we, Hoda?” Guthrie responded before letting viewers know that she was broadcasting from the basement of her New York home. “Here’s what happened: I wasn’t feeling my usual best; a little sore throat and some sniffles. I wouldn’t have thought anything of it but we are in different times, aren’t we?”

Things look a little different for us this morning. @savannahguthrie wasn’t feeling her best, so in an abundance of caution and to model the vigilance the CDC has asked of all of us, she followed the advice of NBC’s medical team and is working from home. pic.twitter.com/kAszjLblS0

She continued, “So in an abundance of caution and also to really model the vigilance the CDC is asking of all of us right now -- we followed the advice of NBC’s medical team -- and so here I am. I’m working from home as we speak. And we’re still together and we’re going to get the show on the air.”

Despite being in isolation, she put on a positive face and the co-anchors continued the show as normally as possible.

Savannah Guthrie with her kids and husband on Instagram
Here’s the reason I’ve been out for a couple days. This little cutie has super strength!! Last week, Charley threw this train at my eye and turns out it caused a large tear in my retina, which has caused me to lose sight temporarily in my right eye! It was a little bit touch and go over the last few days but it looks like the retina will hold and not detach and I won’t need full eye surgery. The docs are hopeful the laser procedures are working to keep the retina from detaching and I won’t have to have surgery. Very thankful for good doctors and good medical care. And thankful for your good wishes!!
Fly Eagles Fly #familyjerseys
All glammed up with my handsome man for #Oscars #VFparty
Sunday shoot = bring your daughter to work day ❤️❤️❤️
Kindergarten is a milestone! And milestones are a time to reflect and count your blessings. Well, I am thanking God today for my beautiful, charming, loving, and kind children. And thanking Him for the gift of motherhood. I will never stop being grateful and amazed to be so blessed.
Feeling royally blessed and grateful on Mother’s Day ❤️
Best. Day. Ever!!! So fun having my little girl come to work today and hang with some of her @todayshow besties!
Up Next

Guthrie is now the third member of the on-air team to be put into quarantine after 3rd Hour Today co-hosts Al Roker and Craig Melvin were asked to stay home earlier this week when a staff member tested positive for coronavirus. On Tuesday, Roker used his iPad to give the weather report from his kitchen while Melvin later video conferenced into the show to give an update on him and his family as he attempts to home school his two children.

Meanwhile, Today gave no indication that the broadcast would be interrupted by all the changes in the studio.

“This show’s been around a long time -- 60-something years -- but never has this happened before. We got Hoda in the studio. Al and I are working at home. Craig is from home as well -- we’re actually going to talk to him a little bit later this morning,” Guthrie said later in the broadcast. “I will say Hoda, this was the shortest commute in the history of the world.”

"This show's been around a long time. ... but never has this happened before." @savannahguthrie and @alroker discuss what it's been like working from home while @hodakotb holds down the fort in Studio 1A pic.twitter.com/uhCdmAVp4Z

“This is a little Brady Bunch-esque,” Kotb joked about the screen being split into three to show her, Guthrie and Roker all broadcasting from different locations. “It’s a little funky looking at this three-box, but I’m happy to be sitting in between you guys.”